Sky Sports put this tweet out about an hour ago (as of writing, it has not been deleted): 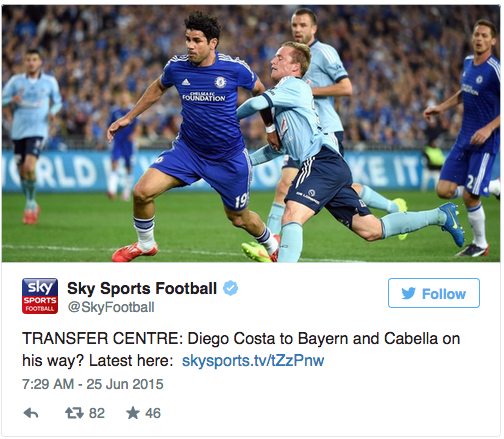 That would be a shocking rumour -- Diego Costa, after winning the title with Jose Mourinho and Chelsea, would abandon ship to hang out with Pep Guardiola? Entirely unpalatable, even as the tiniest hint. Fortunately for all of us, here is the text said tweet was referring to:

Bayern Munich have reached an agreement with Shakhtar Donetsk over the €35million transfer for Brazilian international Douglas Costa, according to reports in Germany.

The eagle-eyed amongst you will have noticed the obvious error. Shakhtar Donetsk's Brazilian Douglas Costa is not in fact the same footballer as Chelsea's Diego Costa. He does not play in the same position, in the same league, or for the same national team. He is a wholly different person, and therefore his potential transfer to Bayern Munich has nothing to do with our top scorer.

Now let's all giggle at Sky.