Mark Schwarzer has joined Chelsea FC, so where does that leave Henrique Hilario?

The Chelsea keeper is still in limbo, but he's survived the latest squad update on Chelsea's official website

Share All sharing options for: Mark Schwarzer has joined Chelsea FC, so where does that leave Henrique Hilario?

Earlier this afternoon, we had the surprise announcement that Chelsea FC had come to terms with a new backup goalkeeper. Mark Schwarzer came to terms on a one-year deal, seemingly solidifying the job as the primary backup to Petr Cech.

Yesterday we checked in on another keeper option, as Henrique Hilario was still listed on the Chelsea website despite not being under contract at the moment. Some thought this meant we'd likely hear of an extension soon, while others thought this was simply a case of the club overlooking the player on their official website.

My first thought when we heard the Schwarzer announcement was clearly concern for Hilario. Would he survive the next website update, or would he go the way of Paulo Ferreira and Ross Turnbull? There's really no reason to speculate though, as we can simply take a peek and see for ourselves: 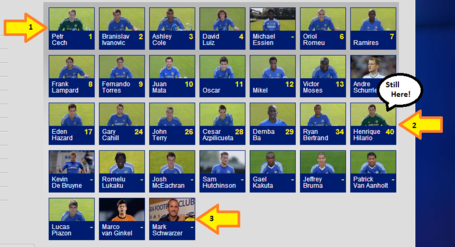 So Hilario is still hanging around, even after the acquisition of Mark Schwarzer. What does this mean? Who knows...but for the time being it looks as if the rarely used stopper will still have excellent seats to watch the Blues.