Barcelona are rumored to want Fernando Torres, and it would be foolish not to sell him if it's true

I decided to take a quick and dirty look at why Chelsea would be foolish not to sell Fernando Torres if Barcelona truly are interested.

Share All sharing options for: Barcelona are rumored to want Fernando Torres, and it would be foolish not to sell him if it's true

Last night we had some silly news that Barcelona was looking at Fernando Torres. I find it a bit hard to believe that Barca would be looking to add a 29-year old on a very high wage that would be little more than a squad player, but just for giggles I decided to write it up anyway.

We all know by now that Fernando Torres cost Chelsea an awful lot of money, and that he's on an awful large weekly wage on top of that. I've seen several different figures floated around for our boy Fernando, but the most common numbers add up to an annual hit against FFP of anywhere from £17.5-18 million. That's a lot of money, and getting him off of our books would leave us an awful lot to spend.

For the moment, I'm going to take a very simple look at what Fernando costs, and what we could reasonably free up by selling the Spanish striker. What Fernando Torres would count against FFP this season would be largely determined by what we sell him for, as we'd be assured to take a decent one-time hit in the year in which we decided to sell. That said, the final two years of his current contract would not show any sort of impact from taking nothing for Torres, it would simply free up the money we had set aside for our #9.

So what kind of money would we be looking at having to spend with the freed up funds? I've laid out a chart below listing what wages (on a standard 5-year deal) we'd be able to pay with differing transfer fees to add up to Fernando's FFP hit (again ignoring this season). Please note I used the higher estimate of his wages, just due to the fact that it happened to be a nice, round number. He's likely actually freeing up just a bit less, but it's such a minimal amount it's probably not worth much more than this note. 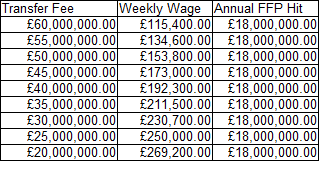 Those are some pretty big numbers, aren't they? Think about all the top Torres-replacements we've been linked with for a second. Want certain Uruguayan with a release clause of about £55 million? Erasing Fernando Torres from the books gives us £134,600 per week to give to him before incurring any additional hit against our FFP accounting.

Cavani isn't for all of us though, as some will question how he'll adapt to life in a better league. Prefer a grumpy, pudgy troll from up north that has proven himself in the Premier League? Matching his ridiculous wage still leaves you £25 million to give his current club, a number they would almost certainly take without hesitation.

Want to try your hand at tempting some guy playing in Germany to come to London instead of Munich? If the rumors that Dortmund would take about £30 million for his services to keep him away from their rivals are true, you'd have just over £230k per week to offer the player to make him change his mind.

Those three players aren't the only options out there either, as there are certainly plenty of other strikers that would provide more bang for our buck than Fernando. Just pick your guy, look at the chart, and decide if we could afford his fee and wages with the additional funds made available by selling him. Odds are we can, and if it's not one of the planet's elite, it probably left you with some more money to play with.

The debate about whether to dump Fernando Torres on the first bidder that comes along actually has very little to do with liking him or not, it's simply a matter of getting the most out of a large investment as possible in the era of FFP. Fernando was much better toward the end of the 2012/13 season, and there's reason to believe he could be a semi-useful part going forward. That said, the amount of money he's taking up in our books is ridiculous, and that sort of money can get a lot more than a semi-useful part.

If you can basically make a straight swap of the current Fernando Torres for Edinson Cavani, Wayne Rooney, or Robert Lewandowski in your books, you'd be foolish not to do so in a heartbeat. Finding someone to take the Spaniard's wages off our hands make the numbers very close from a Chelsea perspective, so cutting our ties with El Nino at the first opportunity just makes too much sense to pass up. Don't worry if some team is getting a "bargain" with Torres. If his wages and amortized hit come off the Chelsea books, the club almost can't help but get better with whomever they choose to spend that money on. It's not personal, it's just common sense.