There’s a small rectangle on the pitch.

It used to be occupied by fancy No.10s in the days of old, or simply visited regularly by strong No.8s of the ilk of our very own Frank Lampard. A place where magic used to happen. Balls leaving this area were either silky passes or scary rockets.

Nowadays it seems that players are scared to go there. Maybe there’s a myth at Cobham, that those who go there will be cursed with seven years of bad hair? Or that they would have to wear our sponsor on their day-to-day clothes as well? (Or maybe statistical analysis has shown that turnovers in this area lead to plays with a higher xG versus other areas.)

Either way, I do think that this void affecting our game and is partly responsible for us looking so lost in the final third. Given that almost no one plays with an actual No.10 these days, there’s no natural occupant of this area. The job then would fall to one of our forwards or attacking midfielders: Werner or Mount If we go by our regular starters of late.

The attacking phase at Chelsea can be divided in the following areas: 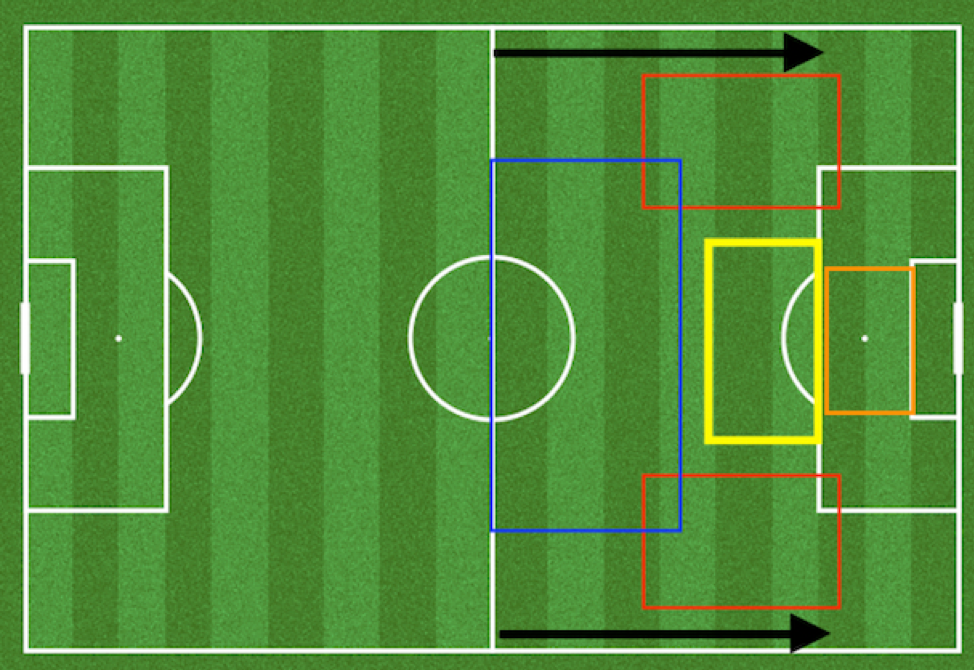 Our attack flow right now is the following. We look provide the ball to our wing-backs deep in the opposition’s half, who are then joined by whoever is in the red area on that side. After that, the next phase is for either the wing-back to run a diagonal and attempt a low cross, or for the ball to circulate back to the blue area. Here the midfielders choose to either try again from the same side or switch. (Or wait for some magic to happen somewhere in-between.) 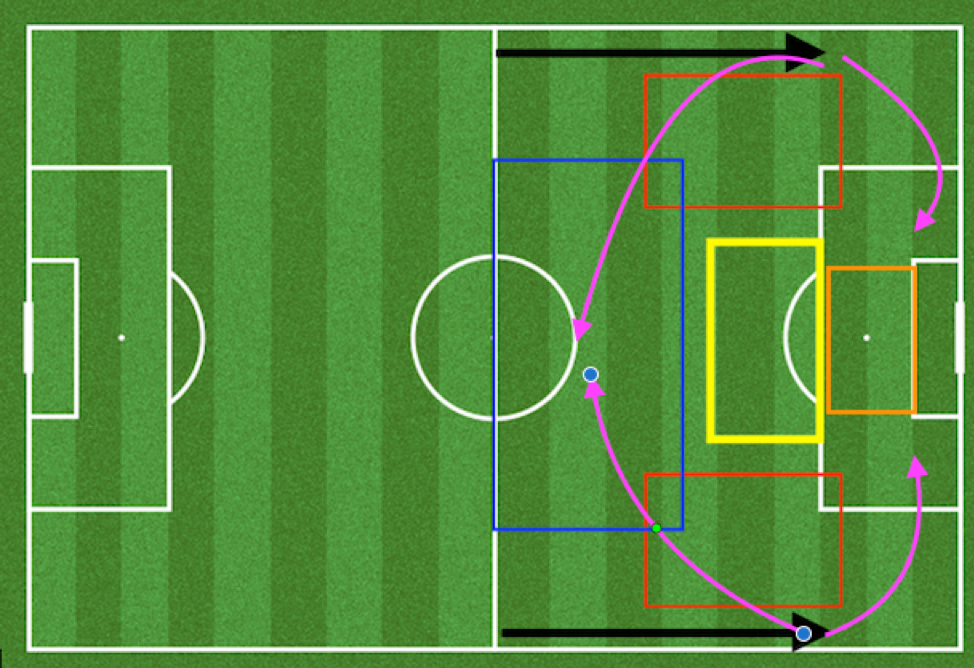 This is a great pattern for ball possession and allows us to control transitions from attack to defense. The system uses the complete width of the pitch, and guarantees that there will always be at least one easy pass to midfield. Any turnovers rarely result in a dangerous counter, because the low-percentage plays are done well ahead of the midfield.

The following is a quote from Martí Perarnau's "Pep Confidential".

"In all team sports, the secret is to overload one side of the pitch so that the opponent must tilt its own defense to cope. You overload on one side and draw them in so that they leave the other side weak. And when we've done all that, we attack and score from the other side.

"That's why you have to pass the ball, but only if you're doing it with a clear intention. It's only to overload the opponent, to draw them in and then to hit them with the sucker punch.

"That's what our game needs to be. Nothing to do with tiki-taka."

The issue as I see it now, is that we’re failing to crate meaningful overloads.

Since the Spurs match, opposing teams have realized that they need to bring one of their midfielders or wingers over to help out, and that sends us into the loop of pink arrows mentioned before. When we do succeed in creating an overload on one side, The striker in the orange zone is already very well-marked by the center backs, and the switch to the other wing can only happen via either a low-percentage ball (which still leaves plenty of time for the defense to recover), or a switch via midfield which takes even longer.

The area of the pitch weakened by our pattern of play is in the middle, but we rarely have someone there to take advantage of it. 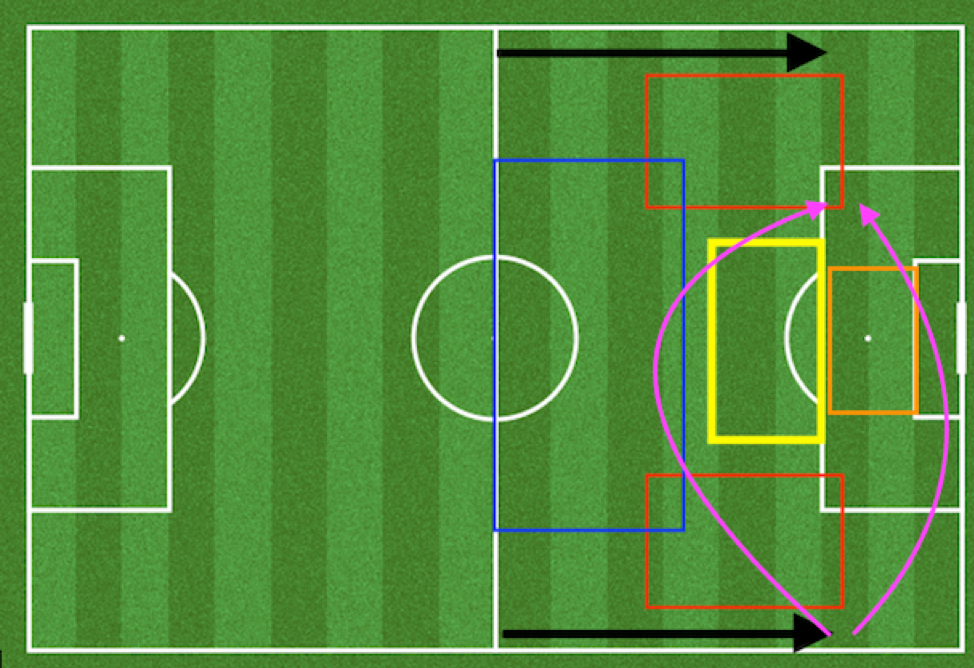 My theory then, is to increase the amount of touches we take in the Golden Rectangle™.

The player taking up that position should either be one of the midfielders* or whoever is in red rectangle duty on the opposite side of the attack. This way, once the overload on the wing is created, a pass to this area leaves the opposition defense having to deal with uncertainty.

(*Another issue is that our midfielders, who do show up around here sometimes, seem to forget how to play football once there. But that’s a tale for another day.)

There are many options open to a player in this area: they can shoot, dribble, or pass in any direction (back to the same flank, complete the switch to the other side, or try a through-ball or a 1-2 with the center forward). 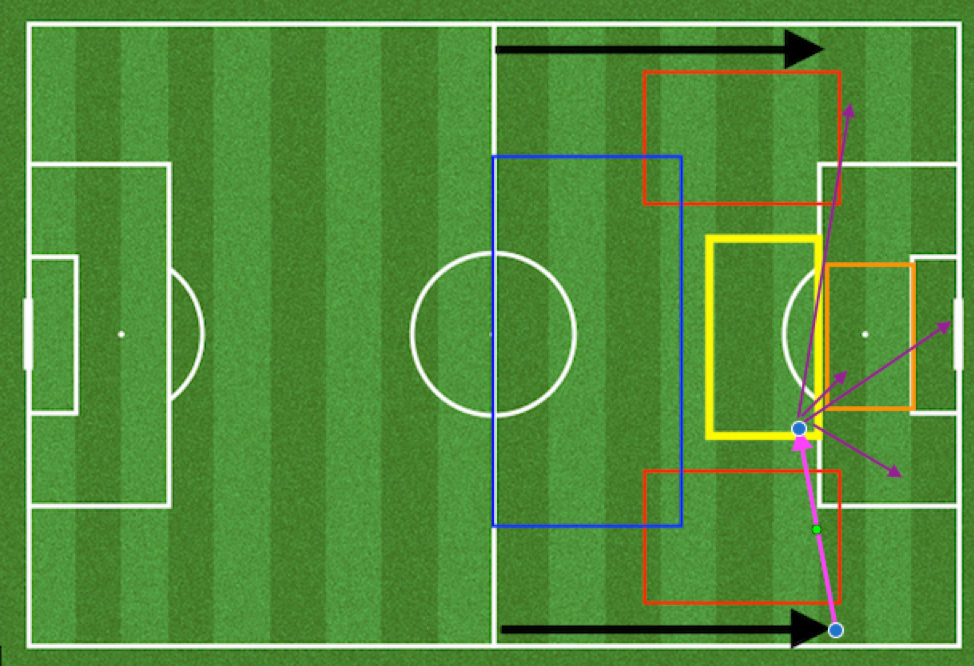 And that is that. This started as a comment but kept getting longer, so I thought I’d make a post out of it instead. I invite you to keep an eye on this Bermuda Rectangle and help me confirm or deny my theory, that our players just don’t take spaces there.

Finally, let me know if you liked this sort of thing. I might ramble on again on similar topics if enough people liked it.