Back in June, I wrote an article on Chelsea's financial and squad status ahead of the transfer window in order to see what the club was capable of in terms of summer transfers. This included a database on Google Sheets that I have now updated after the summer of activity and we will have a quick review of now.

For this season, the 21 players that are costing us the most in terms of wages and amortisation costs this season are: 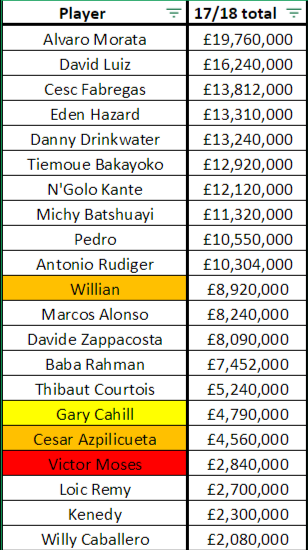 The colours relate to new contracts that have been signed in the last few seasons, the key can be viewed on the Google Sheet.

Looking down the list, we managed to shift Loic Remy's wages off the books, although we still have to pay off the remaining £2.7million of his transfer amortisation costs left on his contract and we did not receive a fee for him. Baba Rahman moves down the list due to new signings and will be in a fine place if he manages to contribute in the second half of this season, otherwise he is quite expensive.

Of the new signings, they all fall into reasonably expected positions on this list other than Danny Drinkwater. As a squad player, Drinkwater is our fifth most expensive player this year. His transfer fee was slightly lower than Bakayoko but his wages are higher, despite being expected to play less than the Frenchman. This can be attributed to the fact that we were buying from a Premier League team who were ready to offer Drinkwater high wages.

Looking at player sales in the table below, we can see that we have made a large number of sales with a massive fees total of around £170m. 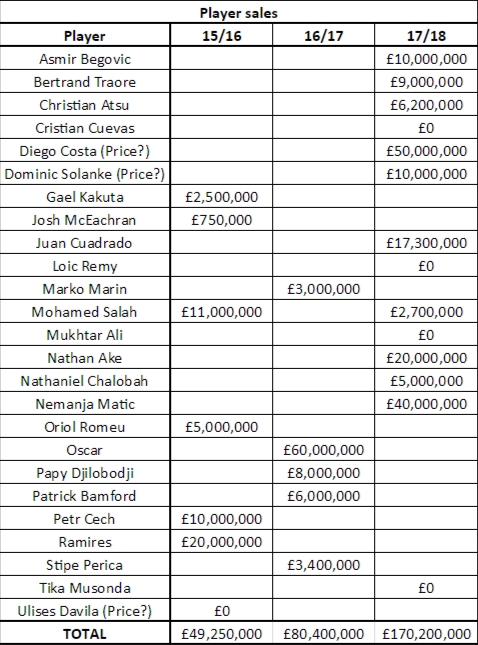 The player sales have had a great positive impact on the finances this season. Below is a summary of the expenditure, based on the database and costs for previous years (which are explained in the original article), the revenues and then the total profit/loss. 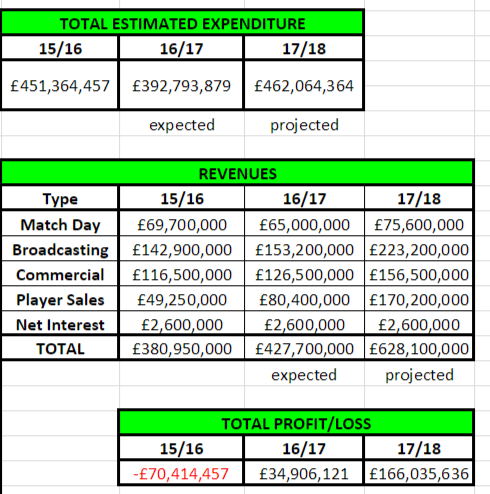 This leads to a massive projected profit of around £166m for this season. It should be noted that these numbers are all based on my assumptions and calculations. The 16/17 figures have yet to be released by Chelsea so if a profit of around £35m is announced then I would have more confidence in the 17/18 season projection. Even if the numbers are off by a few million, Chelsea are sat on a large pile of cash which may be used to contribute to the new stadium or towards future player purchases.

Turning our attention to the squad status, below we can see that after the transfer window, Chelsea have 16 registered non-homegrown players for the Champions League squad. Kenedy is considered U21 for the Premier League squad but not the Champions League squad as he has not been at the club for a period of two years (he joined two years ago but spent six months away at Watford). Looking ahead to January, if no transfers are made, then Baba Rahman could be registered to the squad and we will still be under the limit of 17 non-homegrown players.

To conclude, we have seen that Chelsea are in an extremely strong financial position and are not overstretched too much in terms of squad places. It is not certain as to whether Kenedy will qualify for the Champions League List B in January after spending a period of two years at the club but either way, the first focus in January will be on LWBs, whether it be keeping Kenedy, registering Baba Rahman or looking for a transfer.

Going forward, Chelsea have the ability to spend a lot of money in a way that they see fit, whether that be spending the club's money on the new stadium or spending big in future transfer windows.

A reminder that you can view the tables displayed above along with the database that I have created and used in the Google Sheet here.