2nd half heroics at Leicester give Chelsea another 3 points

Share All sharing options for: 2nd half heroics at Leicester give Chelsea another 3 points

It's impossible to feel any sort of stress when you have a ten-point cushion with five games to play. Common sense is backed up by the numbers -- no matter the result against Leicester City, the title is a formality. And so the first half, a veritable parade of incompetence which culminated in Chelsea being down in a Premier League for the first time since January 1st, was more annoying than anything else.

At any other point in the season, 1-0 to Leicester at half time would have been met by acts of minor violence to nearby possessions and loved ones. In this gentle run-in, however, it felt as though a Carlo Ancelotti eyebrow dance was the more appropriate response to the 45 minutes of rain-soaked comedy we were forced to endure.

The Foxes opened brightly and continued in that vein right up until the break. Using the time-honoured tactic of hitting high passes over our midfield and then running onto the second ball, the hosts were causing us real problems whenever they decided to go forward. Indeed, within two minutes Leicester had their first glimmer of goal when through ball aimed at Jamie Vardy forced Branislav Ivanovic all the way over into the left channel to make a last-ditch challenge.

The Blues need to get the ball and settle down. They managed the first part without too much trouble, but the second was where we collectively fell flat. Nemanja Matic's distribution from midfield either ended up going to a blue shirt (normally this would be good, of course, but we were in our yellows today) or slowing down the attack to the point of incoherence, and the forwards weren't doing any better, perhaps due to the fact that they were falling over all the time.

Leicester were set up to hit us on the transition, and it's not as though we didn't have sufficient notice of that before they scored. Nigel Pearson was forced to burn two substitutes early because of injuries to Andy King and Robert Huth, but his side were still more than happy to hold us at arm's length and then storm forward, and were perhaps unlucky not to take the lead in the 41st minute.

Didier Drogba had already had a first half to forget by the time he wellied a pass straight into Willian's backside and set the Foxes on their way, but the ludicrous nature of the error was such that I don't think the rest of the time stopped laughing for several minutes. Which would certainly explain the chuckle-headed defending that followed -- Petr Cech had to pull off a stupendous dive to prevent Paul Konchesky(!)'s sliced shot creeping into the bottom corner, and we were then treated to the sort of goalmouth scramble that enterprising Youtubers set to the Benny Hill music.

It took a miracle for the Blues to clear their lines, and just like all good miraculous escapes we promptly pissed it away. Mark Clattenburg ignored Estaban Cambiasso planting his studs onto Eden Hazard's ankle in the Leicester half and the Foxes kept the ball. That led to an odd sequence on the right flank which culminated in Matic playing a blind volley back into the middle of the pitch rather than concede a thrown-in, and with everyone out of position the hosts were off to the races.

Matthew James played a raking pass for Vardy to latch onto behind Chelsea's lines, and although the striker wasn't in position to shoot he had plenty of support and not very many defenders to worry about. His cross was low, hard and dangerous, and Cesar Azpilicueta's unfortunate slip meant that Marc Albrighton was able to sweep in it in virtually uncontested. 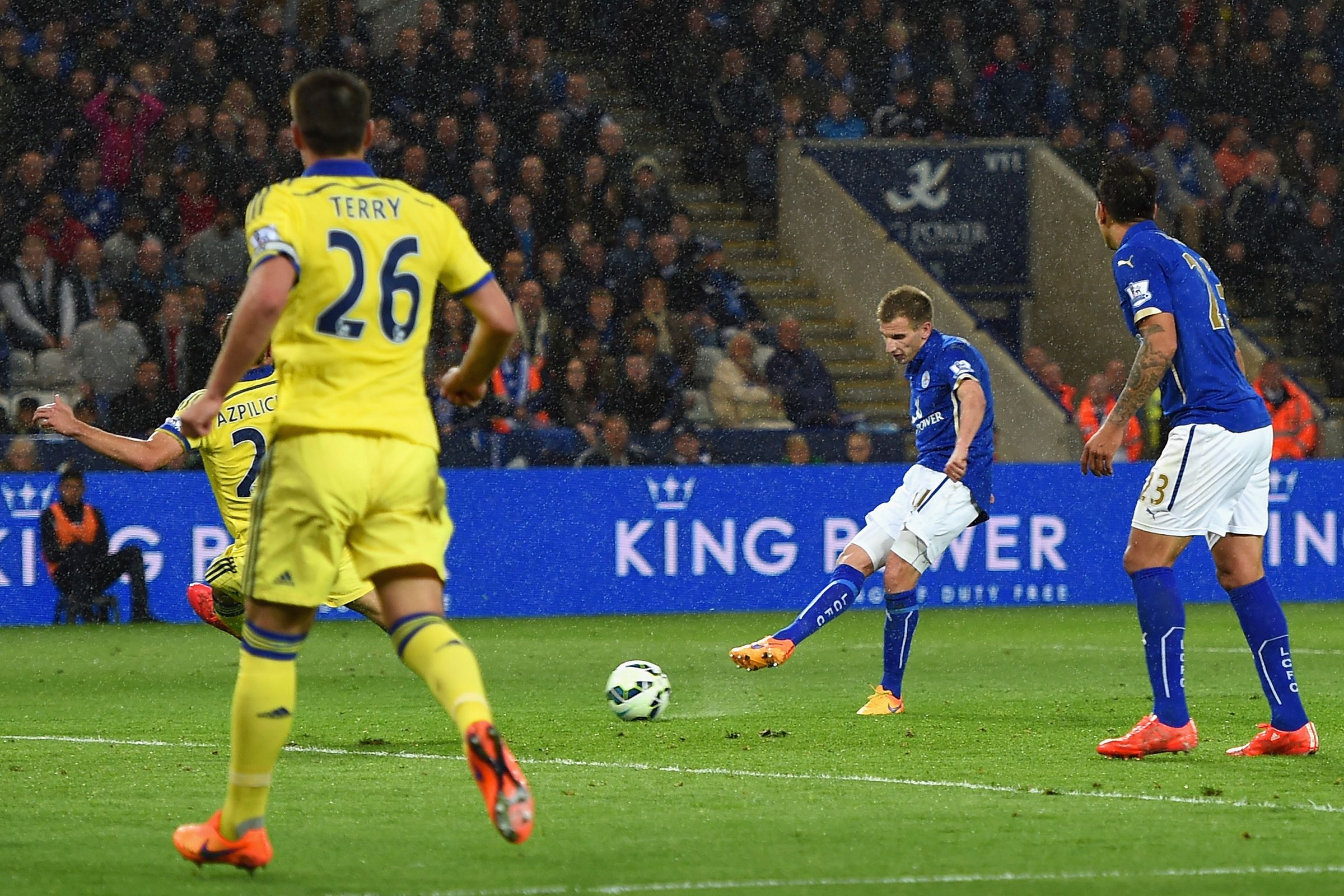 And so at the stroke of halftime the not-quite-champions-elect Blues faced their first Premier League deficit since the fiasco at White Hart Lane. Was an upset on the cards?

No. Presumably Jose Mourinho's team talk involved enough cursing to power the stadium for a few days, because Chelsea came out swinging. Drogba, so lethargic in the first half, was the man to restore parity, smashing an exquisite cross from Branislav Ivanovic past Kasper Schmeichel despite having Ricky de Laet sitting on him as he turned.

The Blues had more than one chance to turn 1-1 into a lead over the next few minutes. Cesc Fabregas teed up an unmarked Drogba at the top of the box only to see the Ivorian balloon his effort over the bar, and then it was the midfielder's turn to waste a gilt-edged chance after a sublime run and even better cross from Willian.

Leicester, in an unfamiliar shape because of the early substitutions, looked shell-shocked and unable to do much more than simply hope Chelsea wouldn't score again. And, in fairness, they looked like their hopes might bear fruit -- after that early flurry the Blues were having trouble getting the final pass right, and weren't exactly troubling Schmeichel.

But when open play fails us, set pieces have the potential to redeem, and so it proved with 11 minutes to go. Fabregas swung a corner into the box, Gary Cahill forced a majestic save, and John Terry was first onto the rebound to stab home from close range. It was 2-1 to the Blues, and the hosts looked more or less spent.

Kurt Zouma was brought on to help kill the game, but Ramires killed it in rather more entertaining fashion in the 81st minute. The Brazilian, who'd had a typically Ramires evening -- that is: working hard, scaring the opposition with driving runs and not being entirely sure what feet were or how they might work -- picked up a pass from Fabregas at the top of the box and spanked it straight as an arrow into the upper corner. It was a fitting goal to accompany the away support's mocking chant of 'boring, boring Chelsea', and an even more fitting way of securing three not particularly important but still very fun points. 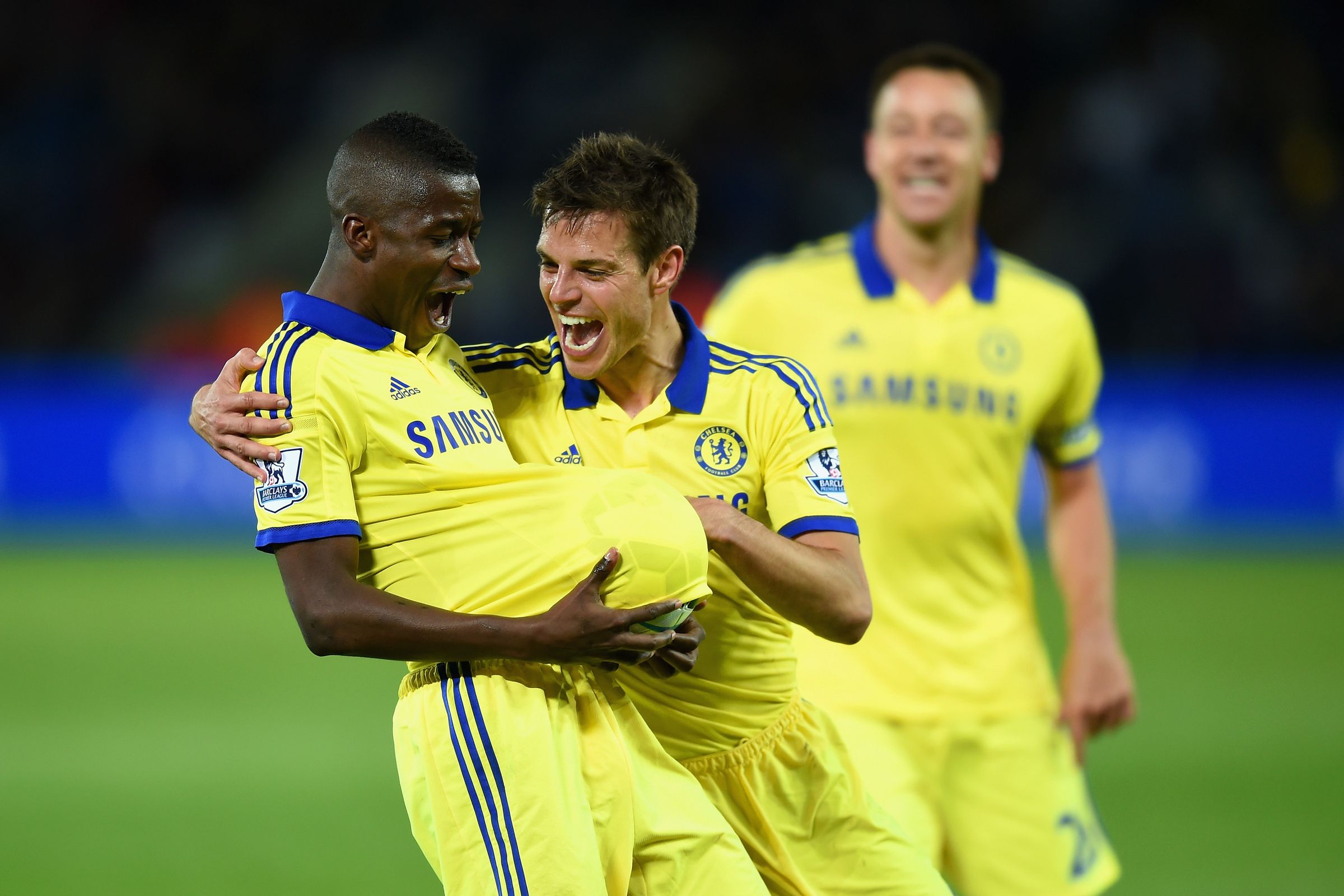 Chelsea are now 13 points clear, and can finish the job this weekend.