Chelsea take another step towards title with comfortable draw

Share All sharing options for: Chelsea take another step towards title with comfortable draw

This game was not important. How could it have been? Second* versus first, sure, but with a 10 point gap and six left to play the difference between possible results was essentially a matter of how long Chelsea would have to wait to lift the trophy. With the QPR and Manchester United games out of the way, there shouldn't have been any pretence: what we're actually looking at is a slow, attritional grind towards the moment the Blues are crowned champions.

But since we have ratings to worry about, this match, in reality a slow waltz over the long-dead corpse of the title race, was billed as one of the most important either side would play this year. Which is, of course, why it so disappointed the neutrals. Chelsea got a 0-0 draw they weren't really playing for, Arsenal made their statement of whatever the hell it is they did, and we got out of the Emirates needing six points from five games to mathematically clinch the title.

Against United last week, the Blues went into a shell, holding the visitors at arms length before attempting to pick them off on the counterattack. The Gunners, however, were a different proposition, and Jose Mourinho opted for a high pressing game with Oscar at striker. This was no everyone-behind-the-ball defensive action (although Arsenal managed to pull that shape off a few times in the second half) but rather a reasonably open end to end match which nevertheless didn't result in many chances.

That was, perhaps, thanks to the work of Michael Oliver, who rose to the non-occasion with all the grace and poise of a koala bear being dropped into a swimming pool. The home fans were perhaps rightly aggrieved that the referee failed to give them a penalty when Gary Cahill handled a shot from Santi Cazorla at close range, but their protests were rendered far more amusing by the fact that Oliver had turned two clear penalty shouts from Chelsea into a yellow card for Cesc Fabregas and basically nothing else.

The first was most egregious. Fabregas, who looked off for much of the match, pulled a moment of quality from nowhere with a delightful pass forward that utterly flummoxed Laurent Koscielny and put Oscar through on goal. The Brazilian dinked the ball over David Ospina, and probably didn't see Hector Bellerin get back to clear off the line because he was then immediately taken out, hard, by the Arsenal keeper. It was a hit vicious enough to (eventually) send him to hospital, and should have resulted in a penalty for Chelsea and probably a sending off for a keeper. Oliver waved play on.

Minutes later, a well-worked sequence saw Fabregas break into the penalty box before being clipped by Cazorla and going down in a heap. It looked like a penalty live, but Oliver pointed for an Arsenal free kick instead, adding insult to injury by waving a yellow card at the midfielder. 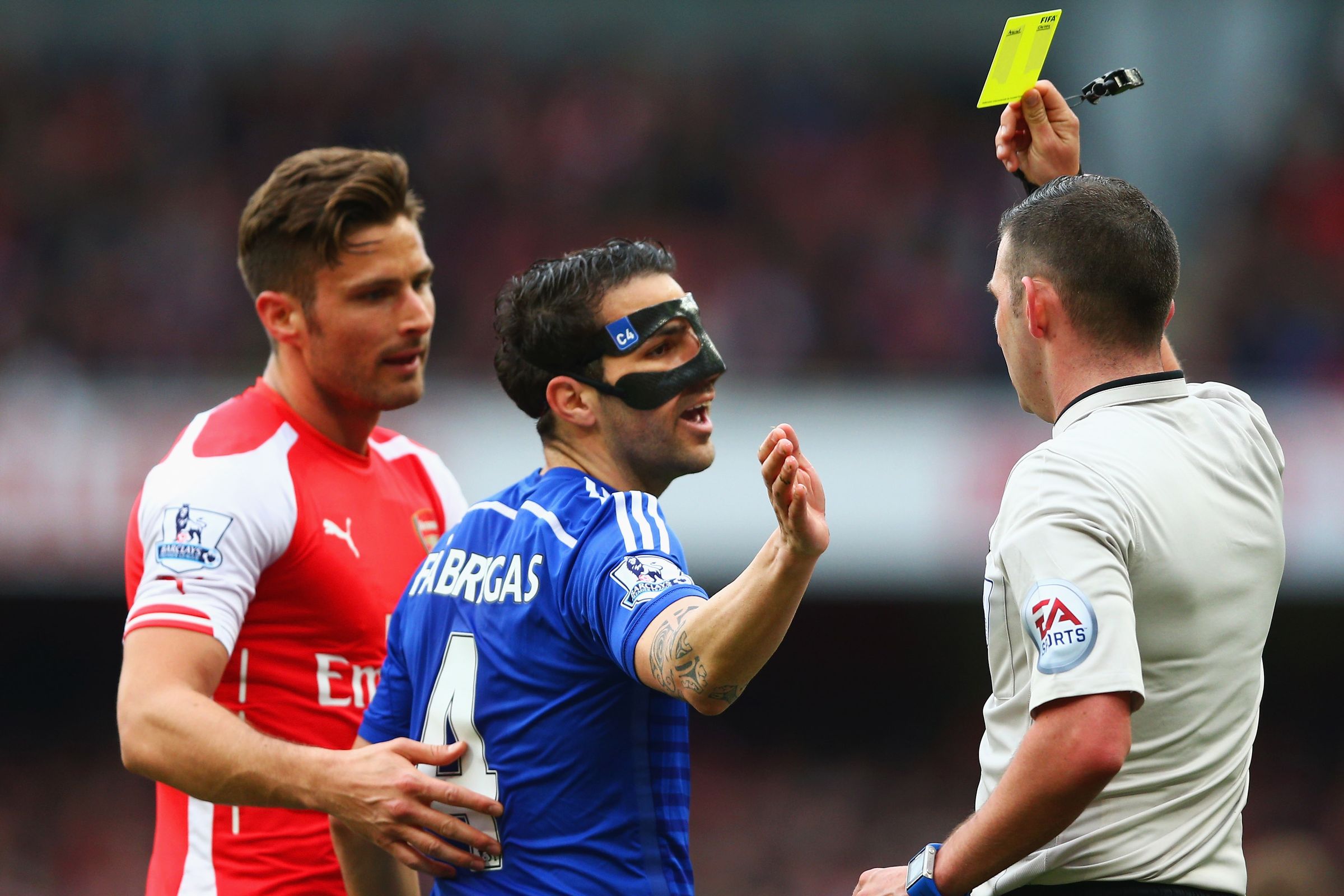 At the other end of the pitch, the defenders were playing astonishingly well. The fullbacks were clearly being held back apart from on goal kicks, and as a result both Branislav Ivanovic and Cesar Azpilicueta were merrily stuffing their opponents, who had to resort to slinging aimless crosses through the Chelsea box. With Cahill, John Terry and Thibaut Courtois all stationed there, there was little the likes of Olivier Giroud could do to fashion chances.

We were somewhat more fortunate, and probably should have taken the lead a little before the break following superb work from Willian. Often attacked as having more industry than skill, he showed plenty of both on the afternoon*, and his pass to spring Ramires was the best of the match. Unfortunately, it was to Ramires, whose finishing oscillates wildly between awe-inspiring and criminal. The dice came up sad-faced, and the ball was squirted limply at Ospina.

*He also kicked Koscielny in the face, which was great.

The second half saw a reshuffling as Oscar, who'd been in a bad way since the collision and probably should have left the game immediately, was sent to hospital. Didier Drogba came on in his place, which left us without much ability to press Arsenal very seriously. Instead, we started to go long, using the Ivorian's knockdowns and flicks to try to play in the wide attackers, which ... didn't work at all.

Arsenal defended well, but their attacking was so lacklustre that I was under the assumption that Arsene Wenger had seen through the hype surrounding the fixture and was playing for a 0-0 draw. That assumption was shattered when the Gunners withdrew holding midfielder Frances Coquelin for Danny Welbeck with fifteen minutes left to play.

The match then became a standard attack/counterattack battle, with the hosts making up for not having a real midfield by fouling whenever Chelsea attempted to break. That resulted in a scary moment or two (Mesut Özil mis-hitting a shot in the six-yard box was slightly concerning) as well as a flurry of Arsenal yellow cards for bringing down runners on the counter.

The hosts hadn't scored a goal against Chelsea since early 2013, and they weren't about to get one now. Oliver's full-time whistle was greeted with celebrations from our players, which at this point hardly seems premature. Six points from the next five games mathematically secures the title. Psychologically, it's long since been over.