It was always going to be difficult to keep Kurt Zouma in the green of Saint-Étienne. A hulking presence at just seventeen years of age, he possessed the physical attributes that coaches tend to dream about. Colossal in stature with speed that belied his size Zouma was not your average teenage footballer. It was not a surprise when Chelsea became interested in signing the young Frenchman: a £12m transfer was soon agreed. 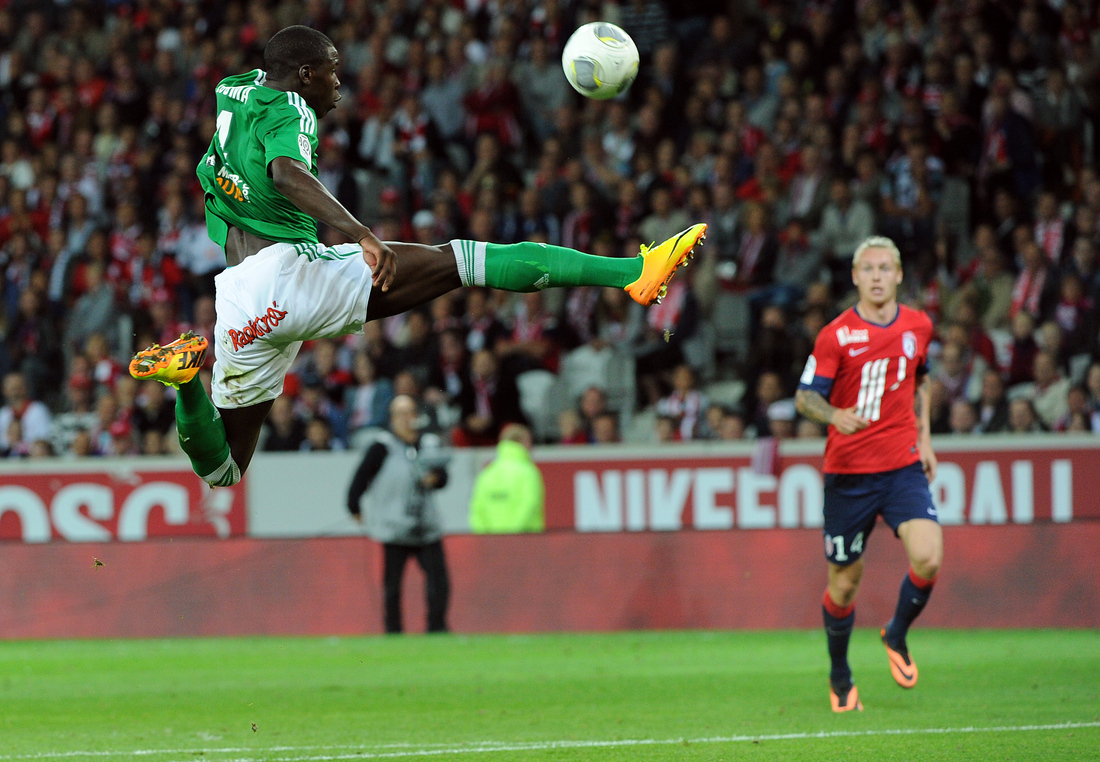 The fee itself seemingly went under the radar. In a window where Chelsea favourite Juan Mata was sold to Manchester United and Nemanja Matic returned, Zouma's signature became a footnote. It was a significant outlay that intimated Chelsea would not be treating Zouma as part of its army of loanees. The deal saw Zouma remain at Saint-Étienne until the summer of 2014.

Upon his arrival during pre-season the potential within Zouma was evident. Physically he was already the most athletic defender within the squad, but technically there was an incredible amount of work ahead. He was a lump of clay that Mourinho and his coaching staff could mould and shape with the help of John Terry acting as a mentor.

Moving along the development of Kurt Zouma from pre-season to his performance against Sergio Agüero has been frankly astonishing. It raises many interesting points about player development in general. Is Zouma a unique player who has developed considerably ahead of schedule? Or has he benefited from world class coaching and playing alongside a world class player? If it is the latter, should his development open the door to other youngsters to become more of a fixture within the squad at a young age? Should the fact that we have spent £12m on Zouma dictate his development path is tangibly different to someone who has come through the Academy?

Zouma has progressed exponentially since his arrival that much is clear. He is currently a starting central defender and on form should retain that position ahead of Gary Cahill. The question remains as to just how good can he be? Is he ready now to start on a regular basis? Or are we jumping the gun? Should he be given more time?

With the explosion of data available at your fingertips many people can produce a statistical evaluation of a player within a few minutes. For attacking players this holds some weight in that highlighting goals and assists feels like an adequate measure of quality. However, making such a broad statement regarding a central defender is immeasurably more difficult. Using the number of tackles or interceptions made offers absolutely no insight into the quality of a player. If a defender makes one tackle all game and another makes five, what does that mean? Is defender A in a better position and defender B being pulled all over the place?

An interesting point raised by Leicester City's Head of Technical Scouting, Rob Mackenzie, suggested that when they evaluated central defenders they looked for "qualities such as aggression, dominance and good records in duels, both aerial and on the floor" as their statistical barometer. In Zouma's small sample of games he has won 100% of his ground duels and 80% of his aerial duels. A rather large pinch of salt there given that Zouma has not played that many games, but he compares favourably with many contemporary luminaries. In terms of aggression and dominance Zouma registers a rather large tick.

Extrapolating Zouma's statistics over the course of the season based on such a small sample size are unlikely to produce such stellar results, but I do think they allow a degree of positivity. Interestingly enough using Leicester's "duel theory" Southampton's centre back pairing, who anchor a typically resilient back four, are performing better than those who start for Arsenal and Manchester City. Also, Vincent Kompany has come into some criticism this year and given his mediocre duel success, could this be the reason? I would also be surprised if Loïc Perrin remains at Saint-Étienne this summer. Is anyone surprise that Terry is up there with the elite? Maybe some variant of "duels" is a fairly strong indicator of defensive ability.

You can argue the statistics are meaningless because of the sample size. Equally, you can look at Zouma playing against Sterling, Agüero and Kane to suggest his statistics should have been far worse considering the level of opposition. I think either way the "duel" comparison is useful even at this stage of the season. The anticipation being that he may "regress" to somewhere around Terry's current level if played across a whole season as he continues to learn the game.

Moving beyond the data, as I am often keen to do, we have witnessed Zouma authoritatively dealing with difficult situations. He wins the ball cleanly, gets well timed blocks in, pushes forwards into areas he can make challenges and has exuded a sense of calm that befits someone far more experienced. By no means has he been perfect, but as we saw against Raheem Sterling he has the recovery speed to rectify a mistake. Zouma shows a willingness to engage the ball, often registering a block or making a tackle and this changes how teams attack us.

For Zouma it is obvious that he improves by playing and most importantly by playing next to Terry. His positional sense is unrecognisable from pre-season outings when compared to his performance against Manchester City. There are still minor issues with the timing of his leap, but a towering clearing header late on against City suggests this is well on the way to being resolved.

Ultimately from a pure defensive perspective Zouma is light years ahead of where his age suggests he should be. The global dearth of quality centre backs makes this all the more impressive. There are not many twenty year old players who could handle both Agüero and Sterling days apart like Zouma did recently. Two performances are definitely not enough to anoint him the second coming of Marcel Desailly, but can we be positive about him? Absolutely.

Defensively there will be mistakes along Zouma's learning curve; they are unavoidable at any level. Nevertheless, I am comfortable with him playing regularly until the end of the season given his supporting cast. Courtois, Ivanovic, Terry and Matic as immediate players around him are an excellent comfort blanket. Yet, at Chelsea, simply being a good defender is not enough: you need to be able to play as well.

Going back to Rob Mackenzie he states that they look at "the number of ‘line break passes' that a defender makes where they get the ball beyond an attacking midfield or midfield line rather than just a defender who passes from side to side." Referencing Leicester's move into the Premier League he goes further by stating that passing quality is "particularly important in the Premier League where [you] face enhanced pressing."

The level of success Kurt Zouma achieves is likely to be aligned with his technical refinement. We can make an assumption that defensively he is on the right path, so technically he needs to improve.

"When looking at centre-backs, are they just playing the ball back and forth between each other, which is easy and often unopposed, or are they threading the ball between players to a midfielder in a way that allows you to advance? The best players are often the ones who (a) take the risk and (b) are aware that this pass is on. That can be a big indicator of a player's quality." -Rob Mackenzie.

Having conversations with Sébastien Chapuis (@SeBlueLion), a technical football analyst on French TV and coach, he made some very interesting points around Zouma. We both agreed that these were things that certainly will come with the confidence of playing regularly, but they are pertinent nonetheless.

He recently looks a lot more calm when playing which led to Séb saying "he seems more composed than I've seen in the past, less tense and more willing to play the ball forwards".

In line with Rob Mackenzie's beliefs Séb noted that "[Zouma] has room for improvement as a ball playing centre back. To be able to get on the ball, get past the striker and play the first pass forward. Currently Matic and Fàbregas slide into channels for Zouma to play those passes". An issue that Séb believes is down to "technical aspects - first touch, passing technique etc. - he perhaps plays too many passes to Terry or hits too many clearances". 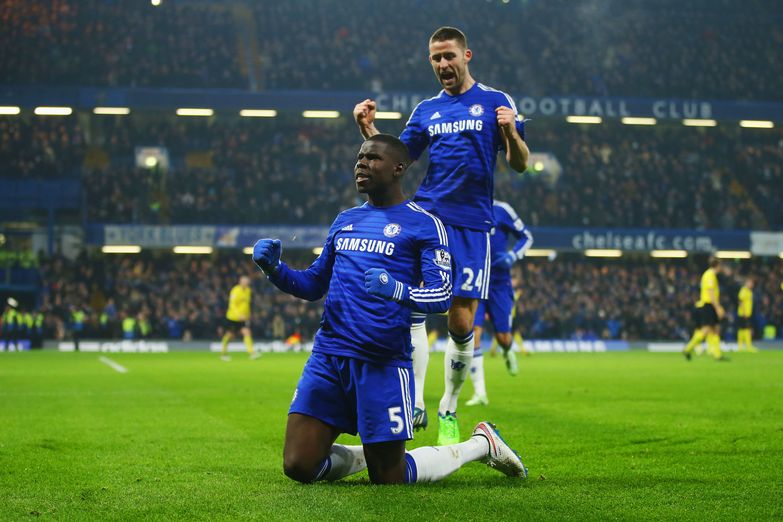 There have been recent examples of his confidence growing in this area and pinpoint passes between the lines to start attacks are becoming part of his repertoire. If he is to truly take over from Terry, this is something he will need to continue to develop. Terry is hideously underrated as a distributor: switching the play 50/60 yards with either foot is going to be something we will miss hugely when he retires.

Will Zouma eventually take more risks, like Mackenzie wants to see? Is he aware that the pass is on? A technical point but one that will surely elevate him from being a good defender to being a complete modern centre back. There is ultimately a fine line between someone who is too aggressive on the ball (David Luiz springs to mind) and someone too passive. Zouma has the ability, but it will be the refinement of his decision making process that determines how successful he will be in the future.

Zouma's awareness is another area that has seen huge forward strides made this season. Séb describes it as "conscious awareness". The fact Zouma "does not fall into overcommitting into spectacular challenges" is likely due to "his reading of the game looking more and more like one of his strengths". When he contests the ball he has made a knack of quickly restarting possession by playing first time passes to an advanced teammate. "This is what top centre backs can do, Benatia at Bayern Munich is a great example of this".

The expectation is that Zouma will eventually develop into a starting calibre centre back. To quickly reach that point he is likely going to need to play the rest of the season next to John Terry. Naturally this does not leave Gary Cahill in a good position, but his limitations have been exposed countless times this season. Do we now invest time in the raw prospect that potentially is going to make inexperienced mistakes? Or do we go back to playing with the experience of Cahill in the hope that he is less exposed?

In reality Zouma is now better suited to how Chelsea plays than Cahill. He has the recovery pace to help Terry and Ivanovic, but also the courage to be proactive against any striker he is playing against. Zouma has outplayed Harry Kane, kept Sergio Agüero quiet and blunted Raheem Sterling. He may simply have had a handful of good games but the level of opposition and opponent suggest those are at least a decent reference point to be positive about where Zouma is heading.

If he continues to improve, continues to learn and retains his focus then Kurt Zouma might well go on and captain the club one day. Already a favourite with the crowd due to some excellent performances and tackling, he both looks and talks the part. Citing John Terry as one of his idols when he was growing up he must be pinching himself to not only be learning but playing with the Chelsea skipper. Although we have seen only a handful of games Kurt Zouma looks every inch the future of the club.