With all the talk of Pep Guardiola's decision to leave Bayern Munich at season's end. Speculation of where he will go next (whether we believe that he is Manchester City bound or not). Ancelotti being the incumbent for Bayern and our once "Special One" being more mortal than deity. The managerial merry-go-round is in full swing.

This brings me to Lucien Favre, former manager of Borussia Mönchengladbach. His resume isn't as impressive as the other managers of the Roman Abramovich era but his know-how and understanding of the game both on field and in the office is something to praise.

Winning a league title with an u21 team with Zurich. Taking a newly promoted Berlin and nearly reaching the top. Then reviving an old giant, who was near relegation and within 3 years have them playing in the CL with B-level players. His resume certainly isn't as impressive as the others who have managed Chelsea during the RA era but his know-how and manager abilities is to par.

However this is not a history lesson, nor to discuss the prospects or convince people as to why Lucien Favre should be picked as the next manager. Instead, to show how Lucien's philosophies of football seamlessly match the roots of Chelsea Football Club.

Lucien favors the 442 in a way reminiscent of the legendary Milan coach, Arigo Sacchi. Two banks of four, compact and on the deep block; shadowing as he put it.

Chelsea's players prefer the deep block. The failure of AVB and RDM was due to high lines and pressure tactics. Jose's final stint at Chelsea came down to his desire for his team to press the opposition constantly and his players not wanting to press at all (i.e.: Hazard benched). Lucien wants his teams to remain sturdy in two banks of four, the ball in front, keep the ball from being played from between the lines. Force the ball either into a well defended player or trapped alongside the wing with overloads.

This way of defending is very hard to break down. Just look at the two clubs who utilize the 442 to great affect in this 15/16 season. Watford and Leicester City, both utilizing a 442 with a deep block, incredibly hard to break down by any combination of England's top flight. Whether it be Liverpool's relentless press, City's world class forwards, Arsenal's total passing, or Tottenham's fast break counter. They all find Watford and Leicester incredibly hard to break down, because of the numbers and rigidity. The same frustrations many felt when playing Jose's 04-07 teams. 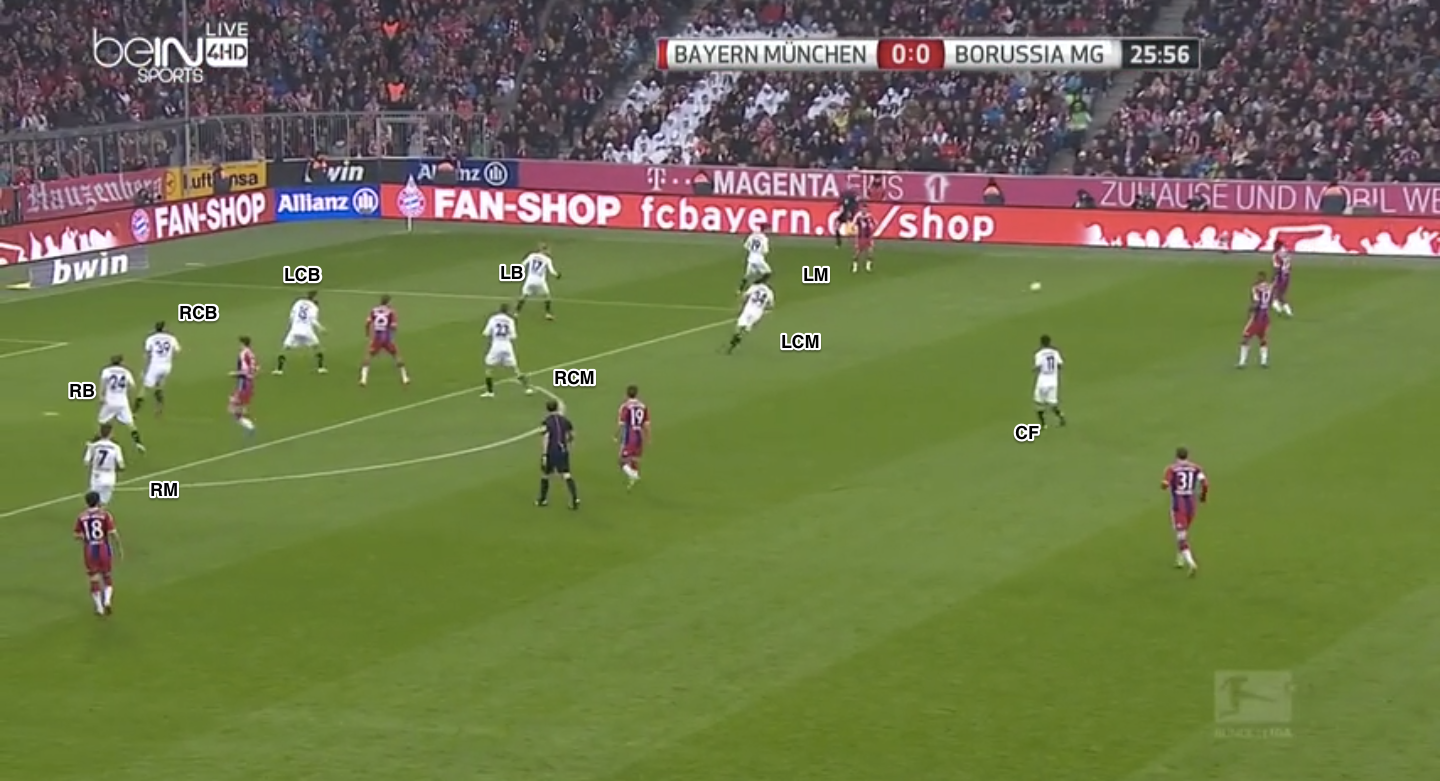 CF dropping deep in the field of play.

In fact the only players that press from Lucien Favre's set up is the forwards. Often one of them dropping deeper into the field of play than the other. Resulting in a 4411 at times. However, the forwards press the free man on the ball, forcing them to play the ball outside (backwards as well) where it is not a threat, or forcing a low percentage pass into the lines where the ball can be won and then transition made. This is very similar to Diego Simeone's Madrid in this instance where the forwards will drop back and aid the midfield. Defending as one entity.

From the above image, you can see two things. The defensive shape is still present although the opponent has lost the ball and Arango is beginning the transition. The fullback a little further forward than the back line but the shape of the 4 4 2 still present, meaning the shape never changed through the defensive phase even with the ball on the flank. However, you can also see the attack shape begin to form. Arango on the ball, Reus, Hanke, and Hermann all preparing to strike. Creating the 424 shape of their attack. (the two inside mids generally don't get involved on the counter but wind up in play if the counter gets thwarted.)

Transitioning very fast from defense to offense but never committing the entire team forward, just the attacking players (unlike overlapping fullbacks and fancy 433/4231 stuff). All of whom possess incredible pace and doing so in numbers so the defense can never settle. Couple that with Lucien's philosophy of short, quick passes played in behind the defenders. Opposing teams have a tough time handling the ball and player movement. Often winding up out numbered or pulled greatly out of position by the pace of the attack and the passing scheme.

Lucien's Philosophy - Can Chelsea play it?

Without splashing the cash in any window. Chelsea could play to this philosophy right from the start. It will take the summer to adapt to the ideas of maintaining shape throughout play, the way of transitioning from back to front, the fluidity of the passing, and the speed of the attack but without a doubt just about every player fits Lucien's system round peg, round hole.

Because of the deep block, there is no need for a sweeper keeper. This instantly means Begovic and Courtois won't be called on to do something they simply don't have the ability to do. We don't have Neuer, Lloris, Keylor etc etc. But we do have very good goalkeepers. One being a top 3 if not then 5 GK in the world.

A combination of father time, lack of talent, and inexperience makes systems of high lines, pressing, bringing the ball out from the back, a very difficult task for our current defenders to complete. Cahill's general lack of talent, Terry's age, Ivanovic's three steps back and Zouma/Baba/Papy's inexperience mean complicated defensive schemes are not capable at Chelsea. However, the deep block and the idea of holding position and keeping the play in front of you is as basic as you can get and by default all of our defenders should be able to fit in without hitch. Plus it doesn't hurt when you have 4 other men helping you defend in unison. Basically pulling the famous bus back on the field.

It's rather simple. Hold position, keep the ball in front of you until the transition is made. Matic is suffering from the desire to do everything all the time. In this system he can be calm and composed because he can be certain that a blues player will be beside him at all times. From Mikel to RLC to Ramires, holding position, winning the ball, and playing it to either a forward or wide-men is pretty basic stuff. Plus all of their strengths fit the system, even Mikel's 90% passer rtg of back and sideways passes. Though Ramires' knack for running forward may become an issue, it is also a time in Lucien's system where 1 mid moves into an 8 role rather than a 6. So there's a time and place for Ramires even in this system.

Again rather simple. Stay in shape until the ball is won. Though Hazard has had issues with tracking back, it is not unfathomable to imagine Oscar playing RM or LM again and seeing Hazard up front as a cam/ss as Reus once did. From the wings, they just need to cover the fullback and trap on the wing when the time is right. Willian has already perfected this under Mourinho and Oscar was the prime example for this under RDM. Moses at Stoke made his career doing this at Wigan and Pedro is showing more of this traits than he did at Barcelona. On the attack, they are given freedom so the give-and-go philosophy of the passing game suits the creative men on the wings (all of whom have pace). Unlike Jose's demand for them to track back and be linear.

Here is the only foreseeable issue. In defense one or both forwards need to press the ball. All three strikers have shown willingness to perform this task at some point. The issue is Costa usually gets carded, sent off, or suspended. While Falcao pretty much can't aid in the attack, and Remy is likely gone by summer. This leaves just Costa to be judged and although he can be clinical when he wants, pace isn't his friend. So we end up with another striker conundrum.

However with rumblings of Chelsea prophetic Drogba heir returning and England's hot young prospect returning. There may be some attack options that Favre could work with whom fit in perfectly.

The general roles for the strikers however is relatively simple. Press the opposition when in the middle of the park, cut off angles when ball is at the backline. In the attack: Counter at speed, link play quickly and efficiently, then last but not least... Finish your chances. Simple enough right? Even Emile Heskey can do that..

There is no need for the players to bend over backwards to fit a system they can't truly play in. Nor does the manager have to sacrifice his soul to appease the players. The way our players prefer to play and the way Lucien likes his teams to play fit hand in hand and unlike a BMG or any other place he has manager. He would be able to get world class players to fit his system if needed (example: Griezemann). All while developing the youth we already have (Bamford, RLC, Aina, etc).

This all could mean Lucien Favre is actually the ideal choice for Chelsea. Someone who can win(Jose), who knows tactics(Pep), who nurtures and raises talent(Wenger), who knows how to man-manage (fergie). He has it all but who really knows right?

Currently not on the club's radar and being connected to Swansea, Galatasaray, and Lyon. The perfect marriage of Favre and Chelsea may never happen in any lifetime. But it's fun to dream right?

You can dream too... Borussia-Barcelona