Matic the hero as Chelsea edge past Sporting

Share All sharing options for: Matic the hero as Chelsea edge past Sporting

So the good news: Chelsea won a European away match and now top Champions League Group G thanks, in part, to Maribor snatching a point in Gelsenkirchen. The combination of results on matchday two leave the Blues in excellent position -- home and away wins against Maribor would guarantee us a place in the knockout rounds and all but secure top spot as well. So that's nice.

The bad news is that that was painful. Not the overall performance, which was mostly fine barring some extremely weird clearances towards the end of the match, but rather the performance in a very specific context, which I will refer to (but just in this sentence) as the WHY HAVEN'T YOU SCORED MORE vortex. 1-0 wins are fantastic when they're hard-fought and important. They're less fun when you should be up by six by halftime.

Within the first 30 seconds, which was enough time for Chelsea to steal the ball from kickoff and then play about 40 passes, it was obvious that the Sporting back line was somewhere between 'bad' and 'imaginary'. The Blues swiftly took advantage of this fact, with Oscar playing Diego Costa one on one with Rui Patricio. Normally, this would result in a goal, but the Portuguese international stood strong to turn the shot behind for a corner, from which Gary Cahill missed a free header.

Following Costa's big miss, André Schürrle decided to get in on the action, charging around the pitch with great enthusiasm but to little overall effect. His defensive contribution in question after the 1-1 draw against Manchester City, Schürrle replied to his critics by putting in a very solid shift whenever the Blues were out of possession -- only to go out of his way to sabotage our efforts going forward, with the nadir of his day coming when he missed an open goal set up by Eden Hazard.

Despite our chances from open play being spurned with extreme prejudice, we still had a set piece threat (although you probably wouldn't know that from the corner kicks Chelsea were taking). And out of all the potential scorers, it was Nemanja Matic who was the most appropriate, the former Benfica man obviously keen to get one over an old rival. So when he popped up at the far post to send a header looping over Patricio and in ... well, it couldn't have felt more natural.

The misses that followed were easier to stomach thanks to the lead, but the match was starting to take on a very Schalke-y quality, and that didn't exactly turn out well for us. Sporting attacked, we dealt with it (or Nani tried to pass to the referee), and then we spurned a golden opportunity to extend the lead. Repeat ad fulltimeaem. 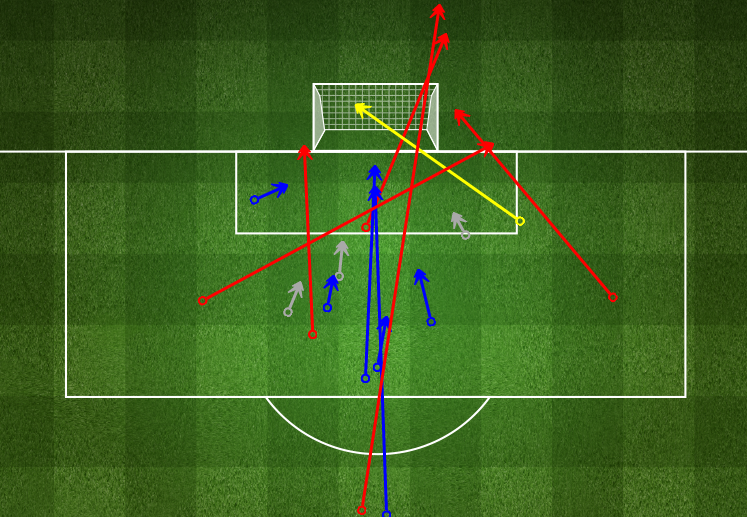 ... and that doesn't even count the brilliant Matic pass that Patricio just got ahead of Costa on or the weird Schürrle offside thing that he missed anyway.

There were certainly opportunities for Sporting to get back into the match, especially after halftime. The hosts looked like they realised just how frustrated Chelsea were getting by not having put the game away and that they'd have a chance to seriously annoy us with a goal. Fortunately -- unlike the Schalke game -- the goal never came, although both Nani and Fredy Montero gave us some serious scares as the match wound down.

Chelsea were forced into increasingly desperate defending, especially on the transition, and it was no surprise that we managed to pick up four bookings after the break. But any problems we had were felt even more keenly by the opposition, who at one point saw defender Mauricio try to wipe out Costa on the break, fail, and end up getting shown a yellow card while getting stretchered off.

The karmic bloodying was probably the most exciting moment of a half which promised much but delivered little. In keeping with the general flavour of the match, we had one more missed one-on-one to close it out in injury time, with Mohamed Salah failing to get his first goal of the season after being played through brilliantly by Fabregas.

Thank goodness Matic grabbed that goal, or the mood would be very, very different.