Chelsea finally work out what shirt number Rémy will wear

Share All sharing options for: Chelsea finally work out what shirt number Rémy will wear

The most interesting part of the Loïc Rémy transfer -- which was perhaps the most straightforward and boring of recent memory -- was the fact that Chelsea seemed to have no idea what kit number he'd be wearing. Sure, we were informed fairly confidently by other sources that he'd wear #18 (which is indeed what he will be wearing), but the Chelsea website was left horribly dazed and confused by the arrival of the France international.

First he had no shirt number. Then he had #13, which was obviously not what you'd give to a backup striker on account of it already being taken by Mr. Thibaut Courtois, who is neither backup nor striker. And then they forgot that Diego Costa existed, giving Rémy our ace's #19. We have pictorial evidence: 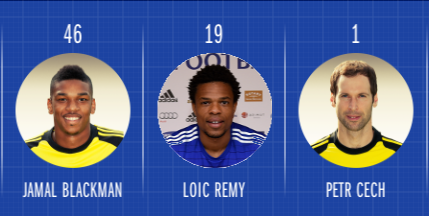 I can only imagine Rémy's face upon hypothetically being told he'd have to fight Costa for his shirt number. SHANKINGS FOR DAYS. Anyway, Chelsea have finally confirmed the actual number:

Loic Remy will wear the number 18 for @chelseafc... #CFC pic.twitter.com/KiVKl6qUA0

May you play score more goals in it than the former occupant, Loïc.