Share All sharing options for: Premier League starts, this year and last

We're now six matches into the 2014-15 Premier League season, and although six matches is hardly enough to analyse anything, the league table is obviously a useful signpost. So let's go poking around.

I'm going to restrict this to the now-traditional Sky Seven, which is to say the teams that have realistic and consistently-met goals of making it to the Europa League places (and higher). That is: Arsenal, Chelsea, Everton, Liverpool, Manchester City, Manchester United and Tottenham Hotspur. First, let's see how everyone was doing six matches into the 2013-14 campaign: 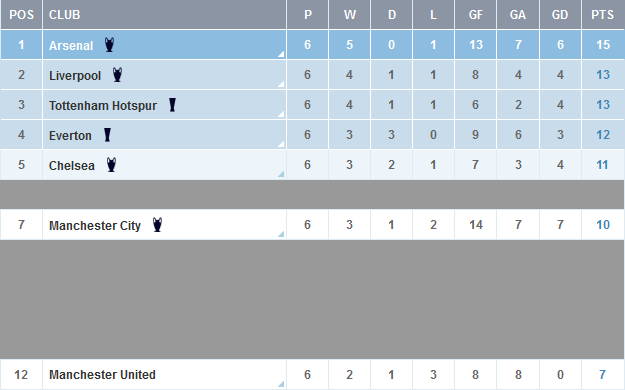 After a home loss against Aston Villa, Arsenal had reeled off five straight wins to go top of the table, with eventual champions Manchester City some five points behind in seventh place. Liverpool, Spurs and Everton all had strong starts, with Chelsea in fifth with 11 points. Manchester United, meanwhile, were getting well and truly Moyesed.

How does that same table look now? I'm glad you asked 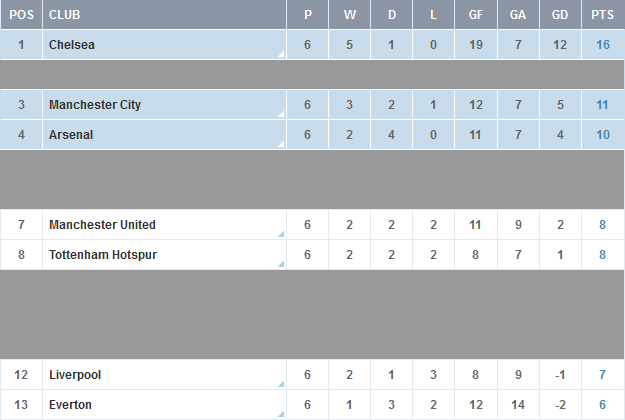 By the numbers, three teams have made an improvement on last season's start. Chelsea are the big winners, up five points, but both Manchester City* and United have a point more than they managed this time last season. The other four sides have collapsed. Arsenal and Spurs are both down five points, and they're not even the worst off: both halves of the Merseyside derby are an incredible six points worse off than they were this time last year. It's early, but there's a lot of ground for them to make up.

*Remember that this time last year City trailed the leaders by five points and went on to win it, so don't get too cocky about that lead.

Goals-wise, Chelsea have scored twelve more than they managed in their first six matches, but on the flip side they've also conceded far more often, shipping seven goals to last season's four. But nobody in the seven has had a stronger defence this year -- the Blues are tied with Arsenal, City and Spurs in goals conceded, while the rest are merrily lolling their way through the early stages of the season.

What have we learned? There's probably not much to learn form six games worth of data from two seasons, but what we're seeing is Chelsea having made a big step forward, City holding serve and everyone else bar United (who had collapsed already) having a much harder time of things. If only we'd managed to hold out at the Etihad, this start would have been perfect.

As it is, it's been pretty excellent.