Loic Remy to Chelsea: the financial impact of the transfer

Share All sharing options for: Loic Remy to Chelsea: the financial impact of the transfer

Now that Loic Remy has moved the six kilometres from Loftus Road to Stamford Bridge, we turn our attention to how the deal impacts Chelsea from a financial perspective.

Such an analysis is increasingly necessary, not because Chelsea is in any danger of facing FFP problems (it isn't), but rather because financial fair play has forced clubs to focus on maximising their resources. Clubs can only spend what they earn, and while Chelsea earns more than all but a handful of clubs, most of the clubs that earn more than Chelsea, namely Real Madrid, Barcelona, Bayern Munich, Manchester United, and Manchester City are in direct competition with Chelsea on the pitch, either domestically or in the Champions League. PSG and its inflated revenues is not included in this list, and it should be noted that the gap between Chelsea and Manchester City is relatively small.

In addition, these clubs also compete with Chelsea for the best available talent on the transfer market, and since financial fair play restricts Chelsea from spending anywhere close to the amount Real Madrid, Barcelona, and Manchester United can spend, the club needs to be smart about how it invests its money (for example, Chelsea's ruthlessly practical approach to acquiring, loaning, and selling young talent is an excellent example of how the club sets itself apart with regards to strategic investments).

After activating his £10.5m release clause, Chelsea signed Remy to a four-year contract at an estimated £80,000 per week.

His £10.5m transfer fee is thus amortised to around £2.63m per year. Combined with his annual wages (£4.16m), Loic Remy will cost Chelsea around £6.8m per year on the FFP books. Remy's cost is very much in line with how Chelsea appears to value backup strikers. For perspective, his annual FFP hit is very similar to what Chelsea paid for Samuel Eto'o (£7.4m) and Demba Ba (£6.2m) last season.

As a bonus, the savings from loaning Fernando Torres to AC Milan essentially pays for the first two years of Remy's contract.

Landing an established Premier League striker at £7m per year is a great piece of business from Marina Granovskaia and Co., and Remy should prove to be a more-than-capable backup for Diego Costa.

Ted Knutson, the founder of StatsBomb, has created a great way to view and compare player statistics. Here, we compare Loic Remy's 2013-14 season to Fernando Torres' 2012-13 season (I haven't seen a Torres radar from 2013-14, but it's likely very similar, with his NPG90 increasing slightly, from .25 to .29). Adding Remy while shedding Torres looks to be a huge upgrade at very little, if any, cost.

If you're interested in checking out more of these radars, Ted is constantly producing new ones, so be sure to bookmark his site and follow him on Twitter. 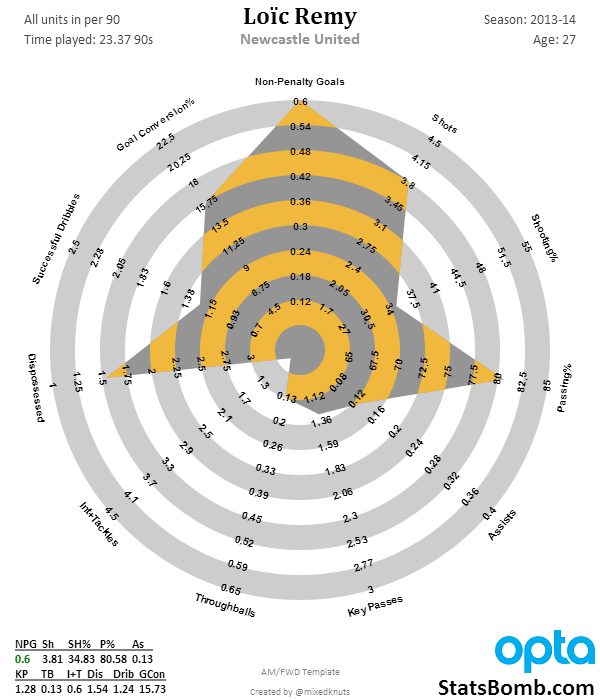 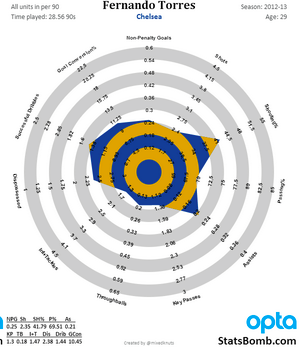