Vitesse has revealed its 2014-15 home kit, and it sure looks nice. The Arnhem club left Nike to join the Macron family, and so far, it looks like a solid decision. In addition, Vitesse now has a lucrative shirt sponsorship deal with Roman Abramovich's company, Truphone. The picture doesn't do the kit justice, and there's a lot of really thoughtful details, including a picture of the John Frost Bridge on the tag. 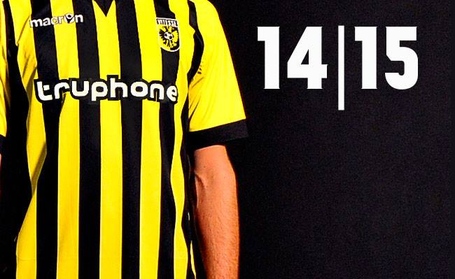 The John Frost Bridge is, ostensibly, a bridge in Arnhem. It's significant because it was named for John Dutton Frost, the British officer who led the 1st Airborne Division during the Battle of Arnhem in the second World War. This is an extremely classy addition to the kit, but for those who know about Vitesse and the city of Arnhem, it shouldn't come as a surprise.

Both the club and the city of Arnhem actively honour the service and sacrifice of the British paratroopers, even today (Vitesse has a special "airborne" kit it wears on occasion in the claret and blue colours of the 1st Airborne, and hopefully Macron does a good job with that).

The club turned the kit reveal into a fun day out for the supporters. There was an open training session, giveaways, and fans got an opportunity to pose for photos with the new kit as if they just signed for Vitesse.

Vitesse plays its first pre-season game tomorrow against Belgian side Cercle Brugge, and while the current roster is only a skeleton of what it will look like by the start of the Eredivisie, it will be good for the players who are with Vitesse now to get back into club football and start laying the foundation for a successful Eredivisie campaign.