So that's left back sorted then.

It did take a little while despite both Chelsea and Atletico preparing for the switch for some time (the Spanish club signing Siqueira; Chelsea letting Ashley Cole go), but finally all transfer fees have been negotiated, personal terms agreed, and shirt numbers decided upon.

Chelsea Football club is delighted to announce the signing of Filipe Luis from Atletico Madrid.

The Brazilian defender has signed a three-year contract...

Now we just have to remember that it's Filipe with two is and one e, not Felipe with the reverse.  Right, official Chelsea website? 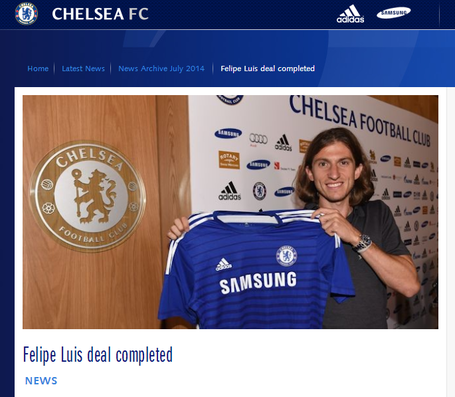 Filipe's arrival adds much needed depth to our first-team defensive corps, allows Cesar Azpilicueta to switch back to the right (while still serving as backup left back, presumably) and allows us to fully utilize Branislav Ivanovic's versatility at both right back and center back.  Exactly what foursome will turn out to be Mourinho's preferred configuration does remain to be seen however.

With Filipe about to turn 29, the three-year deal sounds like a reasonable option, and should allow the club to find an eventual long-term successor either in house or on the transfer market.