In a perfect confluence of events, Diego Costa has been able to grab his preferred shirt number.  With Chelsea officially confirming the striker's arrival just a few hours after the Besiktas president confirmed that his club managed to negotiate a price for Demba Ba, the number 19 shirt has become free to switch owners. On Friday, Diego Costa shirts bearing the number 19 became available on the Chelsea Megastore: 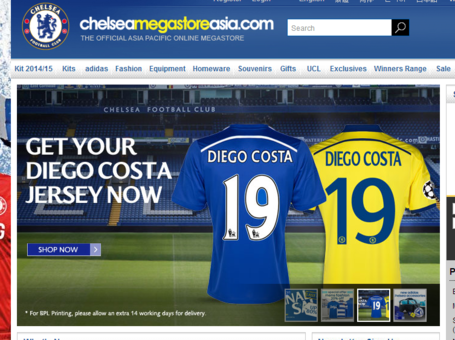 As the traditional shirt number for center forwards has a bit of a checkered recent history at Chelsea -- thanks to Khalid Boulahrouz, Steve Sidwell, Franco Di Santo, and Fernando Torres -- it's probably a good omen that our newest, latest, greatest goal-scoring hope prefers something other than the number 9.

Before Demba Ba grabbed the 19 shirt last summer, it belonged to Chelsea hero and all-around ambassador of chaptitutde Paulo Ferreira.  Before Ferreira, I associated the number mostly with Tore Andre Flo who averaged about a goal every three games for the Blues.  I'd say that's a minimum, worst-case expectation for Chelsea's newest number 19. Hopefully in the future, we'll all associate this number with a goal-scoring machine.