Bertrand Traore joined up with Vitesse earlier today in Germany, where the club is currently working on getting ready for the upcoming Eredivisie campaign. There is a lot of excitement around Traore this season, and with the lone striker job in manager Peter Bosz's 4-3-2-1 formation up for grabs, the young Burkinabe has a great chance of being one of the focal points of the Vitesse offence this season.

The Vitesse front office is high on Traore, but his biggest fan is likely Peter Bosz. I wrote about just how special Bosz believes Traore can be a few weeks ago, and in case you missed it, I'll re-post an excerpt here:

When Traore first arrived at Vitesse last season, Bosz put Traore through a posession-based drill at training just to see if Traore was truly as gifted as he'd heard. This drill involved several players in a small space, and according to Bosz, it's the most difficult possession-based drill he uses. Bosz said that it usually takes months for a new player to adapt to this drill, but Traore was successful on that very first day of training.

Traore to Vitesse: the Arnhem perspective

Is Wallace a good fit at Vitesse?

Traore to Vitesse: the Arnhem perspective Is Wallace a good fit for Vitesse?

According to Bosz, Traore's best position is on the right wing, as he likes to use his left foot to drift inside (in his words, more like Lucas Piazon then Arjen Robben). In order to give the wingers freedom to drift inside, the fullbacks need to overlap, so expect to see Traore work heavily on communication with his fellow Chelsea loanee, Wallace. However, with Renato Ibarra playing for Ecuador in the World Cup and having played very well on the right wing for Vitesse last season, I could envision Traore playing up top (he scored all three of his goals while playing as the lone striker).

Bosz also praised Traore's maturity and intelligence on the pitch, stating that he rarely loses the ball and doesn't make silly mistakes. Specifically, Bosz recounted a story from Traore's debut last season when he was leading a counter-attack with Patrick van Aanholt. Bosz said that nine out of ten players would have made the easy decision to lay it off to van Aanholt, but Traore drew in the defender, and once he made the defender commit, only then did he pass the ball to van Aanholt, who, as a result, had a clear shot on goal.

Anecdotes aside, the statistics show just how special Traore can be. 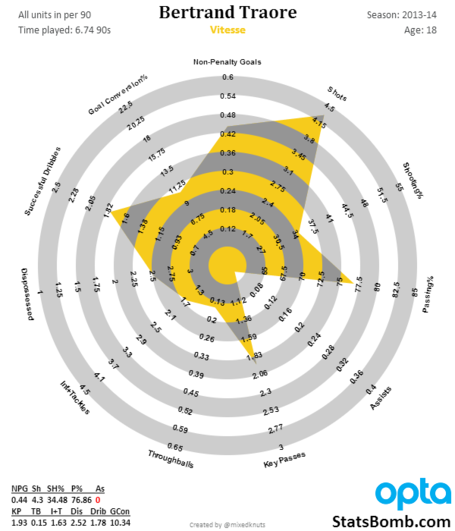 Ted Knutson, the co-founder of the excellent StatsBomb website, created these radars, and I find his work in football data visualisation to be truly innovative. He often produces several radars per day and posts them on Twitter. I believe he's currently working on a way to easily search for specific player radars and perhaps make comparisons on StatsBomb, so be sure to look out for that.

I've spent some time this summer learning about some of the advanced football statistics and how use them, and we'll likely have a bigger post explaining Ted's work and how it has wide-ranging applications in the field of player analysis sometime in the future.

For now though, as Ted notes, Traore has "strong numbers all over the place," and "should be a huge talent." While Traore's sample size was a bit small, keep in mind that his time at Vitesse last season was his first real experience in professional club football, which makes his radar all the more impressive.

Admittedly, the statistics need to be fully explained in order to fully appreciate what you're seeing, but for a comparison, here's what average (50th percentile) and very good (75th percentile) player radars look like - 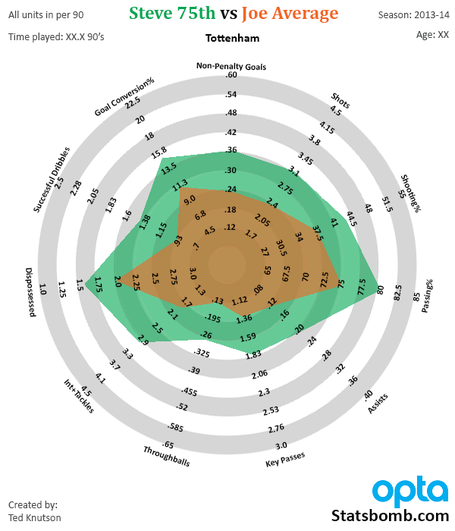 As you can see, at just eighteen years old, Traore has already shown himself to be someone who can be counted on to put the ball into the back of the net. He also has some excellent passing and dribbling numbers. This lines up very well with Bosz's comments on how intelligent Traore plays and how advanced his technique is for such a young player.

Ted has very kindly allowed us to use his radars, and I'll be taking full advantage of his generosity, so expect to see more of Ted's work as a complement to our Vitesse coverage.

For those wondering where Vitesse's other Chelsea loanee is, Wallace has not yet joined up with his new teammates, but he should be with the club soon.

The club drew 2-2 with VfL Osnabrück yesterday and has another match lined up tomorrow against Hertha BSC.

Finally, we've got some exciting things planned for our Vitesse coverage this season, so be sure to stay tuned.