Rather than making a separate post, I've decided that the Hilario(?) is the perfect place to give the mid-month update for the Transfer Rumor League.

So, without further ado: 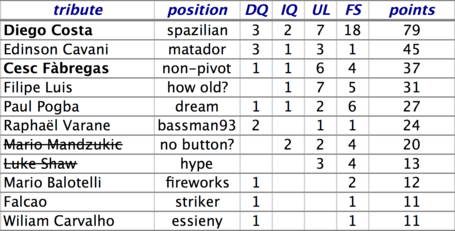 Here's the previous update from July 1, but I'll just tell you that it's Filipe Luis and Paul Pogba, unsurprisingly, who've made the largest points gains over the last two weeks.  Meanwhile, Diego Costa has finally been confirmed, his name now stands alone at the top in bold.

Just below the cutoff, we have the likes of Sami Khedira (9), Arturo Vidal (8), and Didier Drogba (7), and many-many more all vying to get into the business end of the table.  (Which reminds me, if you're going to post a FanPost regarding a player, please do put a bit more effort into it than just a line or two and a question and a poll.  Thank you.)

The MLB All-Star game has a self-serve beer machine | SB Nation
Finally, the future.  (My friend in Brno always tells me about these and I'm insanely jealous of him because of that.)

Weird Al: Word Crimes | The Verge
Weird Al at his best.  Watch and don't be a moran.  Or get out of the gene pool.

Six Californias initiative gets enough votes for the 2016 ballot | The Verge
Oh hurray.  We should be working on that weather machine instead or face the apocalyptic wars over water.