Perhaps in a show solidarity to referee Andre Marriner, the official Chelsea website -- fresh coat of paint and all -- is at this very moment severely confused between Romelu Lukaku and Kurt Zouma.

Now I realize that they're both bigger than a fridge, as the West Brom fans used to sing about the Belgian when he was on loan there, but this is a rather unfortunate error on the "First Team" page of the website.

As of 05:00 BST on Friday, so for at least four-five hours, the error has still not been fixed.  It's one thing to make a typo or fail to properly fact check an event, date, or statistic -- mistakes happen -- but this embarrassing failure goes beyond just using the wrong profile picture.

Check out the URL to Kurt Zouma's profile page.  And then read the text, which begins a story about a young man born in Antwerp, Belgium... 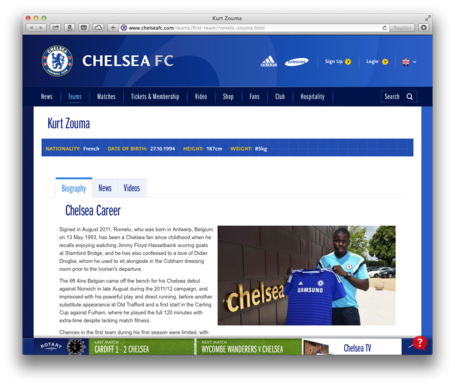 Sort it out, please.  Before the rest of the Internet wakes up.  Actually, it's probably too late for that...