Thanks to the World Cup, the 2014 edition of the WAGNH Transfer Rumor League will only run for two months.

Share All sharing options for: Kicking off the summer 2014 season of the WAGNH Transfer Rumor League

Basically, players earn points each time there's an article or FanPost/FanShot about them.  Note that the article doesn't actually have to be a transfer rumor; the points are strictly based on who's doing the talking.  So if Mourinho says "I have no idea what Cavani's agents are doing in London," BOOM ten points to the Matador.  Though it does have to be about Chelsea buying someone, rather than selling and returning loanees don't count.  Players stop earning points when they're officially announced by Chelsea or sign for another club or when the transfer window shuts.  Points are assigned in the manner of old school (read: '90s) Formula 1 scoring systems:

In 2012, Eden Hazard won the league.  That year, four of the top five ended up signing, lending massive credence to the whole 'where there is smoke, there is fire' theory.  Fun to see both Schürrle and Willian appear towards the bottom of the Top 10 here (as laughable as my comparison of Willian to Theo Walcott may have been). 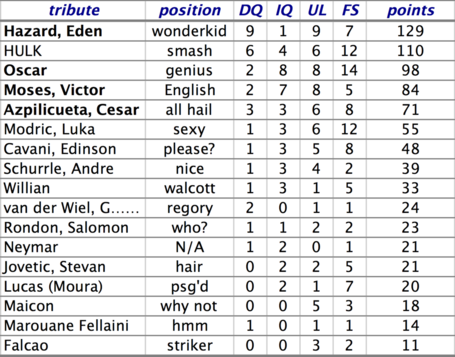 In 2013, both Edinson Cavani (166 pts.) and Wayne Rooney (160 pts.) beat Hazard's point total, yet ended up not signing.  And trust me, there was plenty of smoke (and hot air).  All in all, we were linked to or talked in articles and FanPosts about no less than 116 players.  Here we also see a couple future targets in Matić and Zouma towards the top of the leaderboard, though they eventually snuck in during the winter so they finish their Transfer Rumor League career with fairly low point totals. 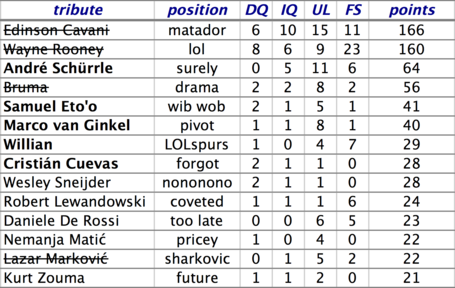 With 214 points from the first two seasons combined, Cavani is the all-time Transfer Rumor League leader.  Sadly, he's unlikely to add too many more points to that total this summer.  (Or is he?)

Since the Transfer Rumor League also counts the points earned during preseason (i.e. the period from the end of the winter transfer window to the start of the summer one), some players have gotten a head start on this year's league.  And since we were locked out for a month due to the continuing madness of the World Cup, one major acquisition has already been signed, sealed, and delivered even before this first update.  Despite that, it is not Cesc Fàbregas who stands at the top of the leaderboard. 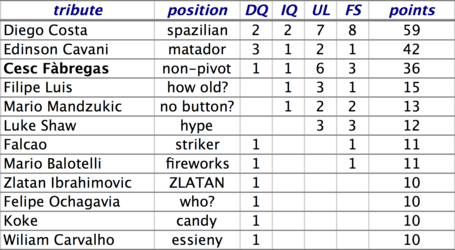 But there are still two months to go in the summer transfer window (and I need to double-check the FanShots and FanPosts).  Events beyond our wildest Pogbavanidreams may yet happen.  We have partially done deals for strikers, midfielders, and left backs to wrap up and I'm sure we'll spring a surprise or two, especially once Michael Emenalo gets the donkey wheel turning on the Young Talent Assimilation Smoke Monster.