Everybody has a price: Juventus quote Manchester United £60m for Paul Pogba

Share All sharing options for: Everybody has a price: Juventus quote Manchester United £60m for Paul Pogba

Remember how just over a week ago, Juventus director of football Beppe Marotta tried to see off interest in his two midfield stars Arturo Vidal and Paul Pogba?  Well, it turns out that Pogba at least (presumably still in talks for a new contract at the Italian champions) has a price.  And that price is £60m.

Granted, this information* is one of those baby mama's cousin's dog's best friend's auntie's third cousin twice removed overheard the janitor sort of deals, but still... TO THE CHOPPAH, ROMAN!

Manchester United have been quoted £60m if they want to persevere with plans to bring Paul Pogba back to Old Trafford two years after his acrimonious departure on a free transfer.

The Observer can reveal that United are not only targeting Kevin Strootman from Roma but have made repeated attempts over the past year to explore whether Juventus would sell them the midfielder at a huge profit. Mino Raiola, the player's agent, said this week that Pogba was happy in Turin but United's information is that the France international is open to the idea.

United believe the fee that was quoted to them is both realistic for a player of his talent and age, yet also a gamble. United did think it was worth persevering and have been in regular contact with Juventus.

* Daniel Taylor wrote one of my favorite articles of last season, the one that detailed the clandestine CIA/NSA/MI6 operation that was the Juan Mata transfer.

If Pogba's open to a return to United after all the bad blood that has passed between them, surely he'd be open to the idea of collecting untold millions at Chelsea as well (while also playing in Europe AND being Premier League title favorites).  Make the phone call.  Fuel the birds.  Prep the checkbook.

I'm not sure there's any need for me to espouse Pogba's qualities.  Instead, I present a conversation I had with Graham soon after the David Luiz transfer was confirmed. 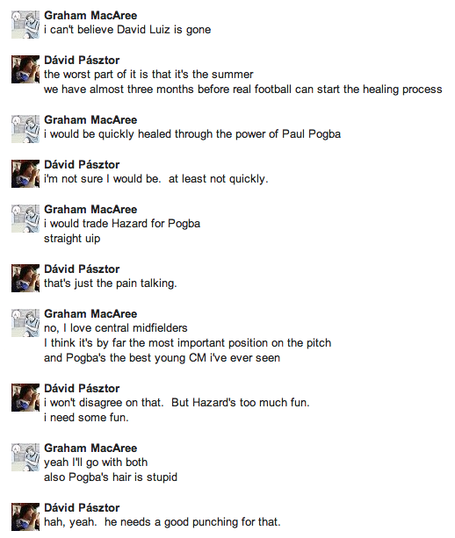