Chelsea's earnings set to increase 30% to an incredible £340m, despite trophyless season

Despite the club not having any hardware to show for its efforts this season, Chelsea is set to have its highest-grossing season ever.

Share All sharing options for: Chelsea's earnings set to increase 30% to an incredible £340m, despite trophyless season

Despite not having any hardware to show for its efforts this season, Chelsea is set to increase annual revenues by 30% and end up with an incredible £340m in earnings for the 2013-14 financial year.  For perspective, this is about £80m more than the club has ever earned in a single year.

Of course, neither Chelsea's owner nor Chelsea's fan base cares much about profits.  Revenues, however, are a much different story, as Chelsea is committed to spending as much as possible in pursuit of chasing the next trophy. This additional revenue will make it much easier for Chelsea to go out and spend big in the next several transfer markets on whoever it thinks will help them earn that next trophy, while still remaining compliant with the financial fair play regulations.

"The goal is to win. It's not about making money. I have many much less risky ways of making money. I don't want to throw my money away, but it's really about having fun, and that means success and trophies."

A thirty percent increase in revenues is actually a conservative estimate, and, of course, we'll reveal exactly how we arrived at that figure.

First, the new Premier League broadcasting deal kicked in this season, and according to research conducted by the always-excellent Nick Harris at Sporting Intelligence, Chelsea is set to earn £94.4m, a £39.4m increase from last season.

With the Premier League and Champions League hauls combined, Chelsea's total broadcasting revenue for 2013-14 will be around £130m.

In total, then, Chelsea will earn an additional £14.2m from its kit deals.

Independent of the shirt deals (which remained unchanged with regards to revenue during the previous three years), commercial revenues have steadily increased.

Matchday revenue is unlikely to change much, as Stamford Bridge operates at 99% of capacity during matchdays.  While the number of games played (and therefore, gate receipts earned) can fluctuate based on how far Chelsea goes in European competition and the domestic tournaments (FA Cup and League Cup), the club consistently finds itself in the latter stages of most competitions.

Therefore, the 6-11% average increase on general tickets conservatively reflects a 2.5% increase on Chelsea's per match revenue, to £2.67m per match.

Figures for how much Chelsea earned during pre-season tours of the United States (or if you want to big it up, its "participation in the 2013 International Champions Cup") and Asia are unavailable.  For the sake of remaining conservative, I chose not to include any revenue generated from the pre-season tours in the projection.

How will Chelsea's revenues stack up against the competition?

For perspective, at £255.8m in annual earnings last year, Chelsea was the seventh-highest earning club in the world.

Manchester United will likely overtake Bayern Munich and will likely join the Spanish giants in the top tier.  PSG is likely to fall off considerably after its highly-inflated related-party transactions are adjusted down to reflect fair market value.  Manchester City, Chelsea, and Arsenal are unlikely to overtake any of the top four, but will close the gap and will create distance between them and the next clubs on the list (Juventus, AC Milan, and Borussia Dortmund).

As the Sporting Intelligence chart shows, every Premier League club will benefit from the new broadcasting deal.  Keep in mind that the chart was created prior to yesterday's  games and the final table has shifted a bit.  Also, as Nick Harris, the creator of the chart, let me know, the £750k per televised game could end up being a few thousand pounds on either side of that figure, and the £54m equal share could end up being somewhere between £53 and £55m.  Despite the possible small deviations to take into account, the chart is an excellent resource as regards to Premier League broadcasting revenues. 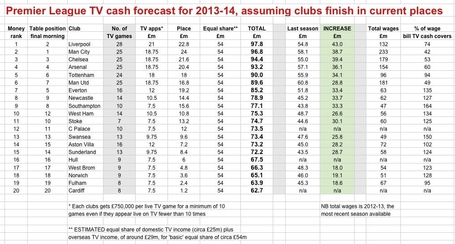 For perspective, the chart below, created by the Swiss Ramble, illustrates just how much of a financial advantage Premier League clubs will have over its European competition going forward. 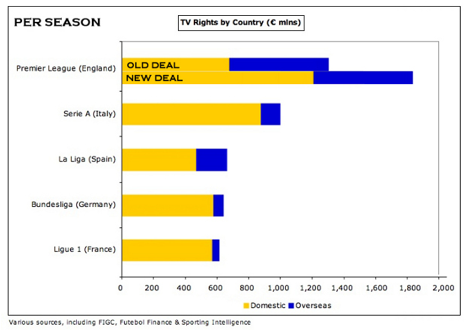 If the entirely fictitious, but attention-grabbing "Chelsea faces FFP trouble" storyline had any life left in it after WAGNH spent the past eight months proving why Chelsea is unlikely to ever face problems related to financial fair play, this piece should be the final nail in the coffin.

Finally, stay tuned for a piece in the near future using this, and additional research, to calculate how much Chelsea can spend in the transfer market this summer.