Share All sharing options for: Chelsea and PSG are vastly outpacing the rest of Europe in acquiring talented young players

In advance of Wednesday night's Champions League tilt between Chelsea and PSG, we decided to see if we could find some common ground between the clubs.

We found that, in addition to their shared affinity for passive-agressive tweeting, both clubs have recently begun to acquire far more young talent than the rest of the European giants.

After taking a look at the 2014 list of 100 players to watch created by the excellent football site journal institution In Bed With Maradona, I noticed that Chelsea, and to a lesser extent PSG, have been very aggressive in acquiring the lion's share of young talent currently on offer.

To wit, the Chelsea - PSG combination has the same amount of players in the IBWM 100 as Barcelona, Bayern Munich, Real Madrid, Liverpool, Arsenal, Manchester City, and Manchester United combined. 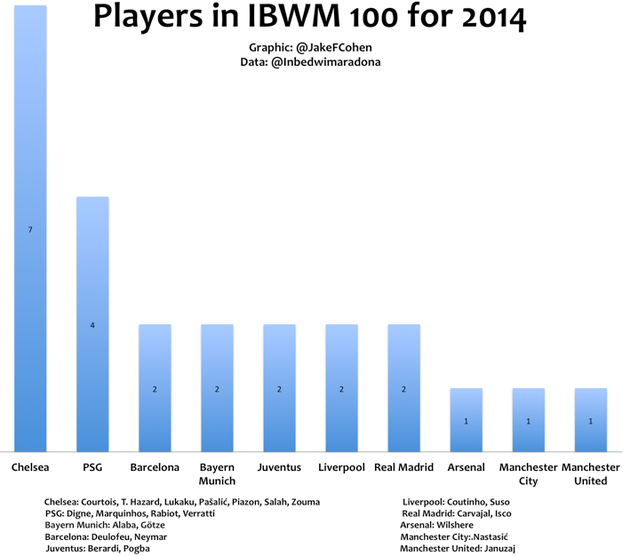 All of Chelsea's players have been acquired via the transfer market since the summer of 2011, although Kurt Zouma, Mohamed Salah, and Mario Pašalić were all acquired during the January 2014 transfer window, after IBWM published its list.

The fact that Chelsea bought three of the IBWM 100 after the list was published was not lost on the veritable football journal, and it appears that Roman Abramovich, Michael Emenalo, and Marina Granovskaia know good advise when they see it.

The seven players on the list cost Chelsea around £62m total in transfer fees, assuming all performance bonuses and add-on clauses will be met.  Without speculating on what each player could fetch on the transfer market this summer, I think it's safe to say that Chelsea will eventually receive a great return on its investment, be it on the pitch or in the pocketbook.  I think most Chelsea supporters would hope for the former, and it's likely that at least Romelu Lukaku, Thibaut Courtois, and Kurt Zouma will join Mohamed Salah in the Chelsea first team next season.

Acquiring as much youth talent as possible and then allowing that investment to mature on loan is crucial to both Chelsea's youth development policy as well as its plan for complying with UEFA's financial fair play regulations.  The players that develop into stars (Lukaku, Courtois) represent a cost-effective way to keep the first team stocked with talent and allows Chelsea to stop relying so much on the heavily inflated transfer market.  The players that Chelsea deems surplus to requirements (Kevin de Bruyne, for example) can be sold on for profit, and even the players that don't pan out can often be sold at something close to a break-even price (Jeffrey Bruma, Slobodan Rajkovic).

PSG acquired Marco Verratti from Pescara in the summer of 2012, and Lucas Digne and Marquinhos (a name most regular readers will be familiar with) joined up from Lille and Roma, respectively, during the summer of 2013.  Adrien Rabiot also joined the senior squad in the summer of 2013, after turning 18, and had already been with the club in the youth system for a few years prior.

While PSG and Chelsea are both acquiring lots of great young talent, PSG is not doing so for the same reasons as Chelsea.  Verratti, Digne, and Marquinhos cost an estimated £49m, and while there are definitely signs that the expense will end up looking like great business, the club does not acquire cheap young talent and then stash them away to reap the benefits in the future.  Rather, PSG spends heavily and immediately installs the players into the first team.  All four players have made significant contributions this season (Digne has played the least, but has still racked up close to 1,400 minutes played).

If you're interested in learning more about PSG's cache of young talent, this should get you started -

Lastly, a few notes on the methodology employed by IBWM (full details can be accessed here) -