Four minutes, four chances -- a look at the bizarre opening to Chelsea vs. Tottenham

Share All sharing options for: Four minutes, four chances -- a look at the bizarre opening to Chelsea vs. Tottenham

After Chelsea's 4-0 win against Tottenham Hotspur on Saturday, the story was mostly about how a 56th minute error from Jan Vertonghen immediately followed up by an error from referee Michael Oliver ensured that the Blues grabbed all three points. Before then, Spurs were in the game, in control of possession, and the outcome of the match was very much in question.

It's tempting, then, to say that the visitors were set up well and played well. Unfortunately, that's only true if you ignore four catastrophic errors in the first four minutes of play which could -- and perhaps should -- have ended Tottenham's day before they begin. 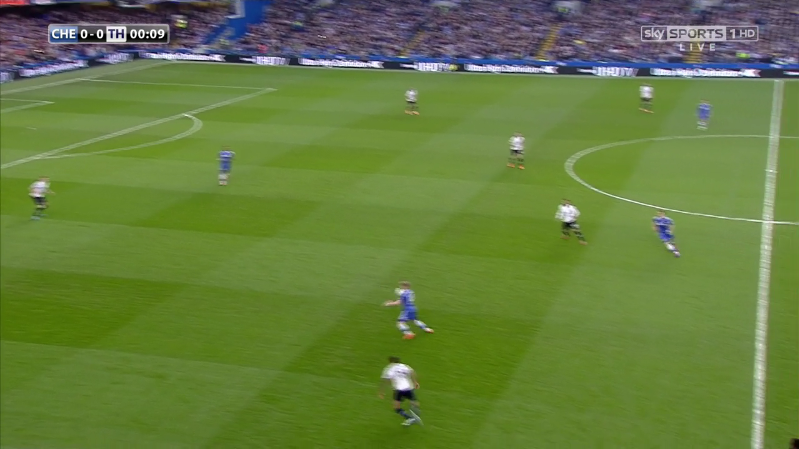 Tottenham kick off and cycle possession back to Michael Dawson, their right centre back. He immediately looks to hit Kyle Walker on the right wing, trying a long, low pass that ends up hitting Andre Schurrle in the midriff. At this point, the Spurs centre backs are split (although they immediately start closing), Samuel Eto'o is in acres of space down the middle, and as long as the German gets control of the ball it's a clear-cut chance.

Fortunately for Tottenham, Schurrle could not, and right back Kyle Naughton was able to charge him down and clear the ball. 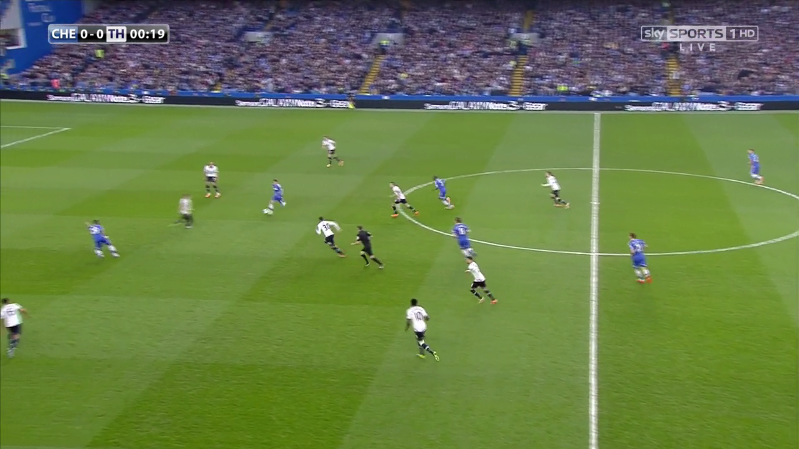 Following the clearance from 0:09, John Terry heads back into midfield. The ball misses Ramires, but Nabil Bentaleb tries to make an interception and completely misses as well, leaving Eden Hazard in possession and wide open. For reasons defying comprehension, Michael Dawson runs across the pitch to try to charge him down, leaving a passing lane to Eto'o open.

Eto'o would then be incorrectly flagged for offside, saving Lloris from a red card after he clipped the striker's ankle with his hands after being rounded. 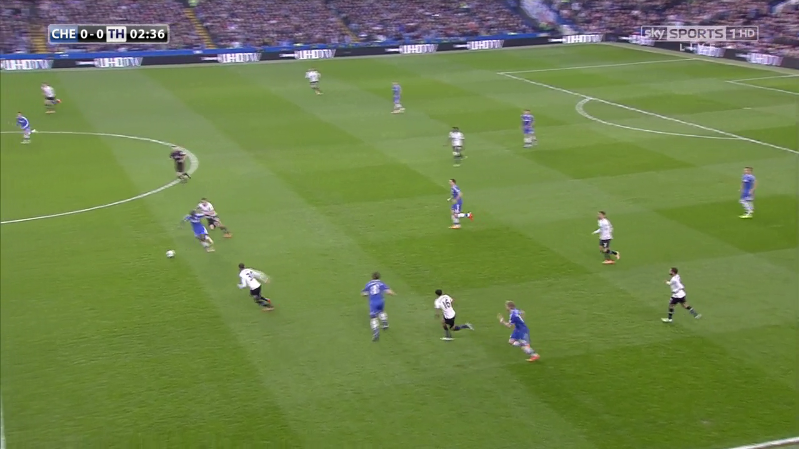 Spurs push both fullbacks and both central midfielders high up the pitch, but Sandro loses possession in trying a simple pass to Naughton. A hooked ball to Ramires catches Bentaleb napping on the wrong side, and suddenly Chelsea are behind eight(!) Tottenham players while barely out of their own final third, leaving Hazard, Ramires and Eto'o three-on-two with Tottenham's centre backs.

Ramires' second touch is too heavy, and Eto'o can't quite connect with Frank Lampard on a return pass thanks to heavy pressure by Dawson, who made a challenge on the halfway line. Has Eto'o's back pass to Lampard been better positioned, a simple ball over the top puts Ramires clean through on goal. 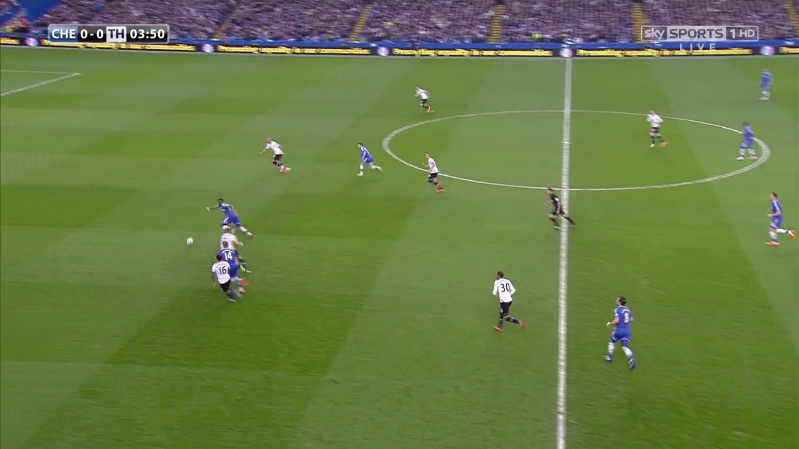 A total mess from Spurs. Cesar Azpilicueta takes a throw-in, Schurrle challenges Naughton on the Chelsea left, and although the fullback clears, he does so under so much pressure that he can't control where the ball ends up. Lampard gets his head to it, weighting a perfect pass for Schurrle, who draws out Dawson before flicking round the corner for Eto'o. It is now Eto'o and Hazard against Younes Kaboul, and the chance eventually ends with the Belgian rounding Lloris before hitting narrowly wide.

There's a common theme at play here: aggression. Having deep-lying players play risky passes (0:09, 2:36) and having defenders jump into tackles they can't win (0:19, 3:50) is a mark of a team that's being almost suicidally aggressive, and the amount of space they afforded Chelsea in those opening minutes demonstrates that Tim Sherwood was looking to push the Blues back into their own half and keep them there. That's a strategy that no other team that's come to Stamford Bridge has tried so far this year, and for good reason -- we're happy to absorb pressure from sides that can't hurt us and then hit them on the break.

On a normal day, one of those four chances results in a goal and we'd be discussing Tottenham's typical defensive/tactical naivete rather than the slew of individual errors that cost them the game in the second half.