Chelsea is officially FFP compliant, not among 76 clubs UEFA is investigating for possible violations

UEFA has requested that seventy-six clubs submit additional financial information to help the CFCB determine if said clubs are in violation of the financial fair play regulations. Chelsea is not one of these clubs, and as such, has officially complied with FFP during the first monitoring period.

Share All sharing options for: Chelsea is officially FFP compliant, not among 76 clubs UEFA is investigating for possible violations

On Friday, UEFA announced that seventy-six clubs are under investigation for potential financial fair play violations, and said clubs have been asked to submit additional financial information.  While the list of clubs has not been made public yet, as first reported by Martyn Ziegler (and subsequently confirmed elsewhere), Chelsea is not on the list.  As such, Chelsea has successfully complied with the financial fair play regulations and will not be facing any sanctions next season.

For those who have been following our FFP coverage over the past several months, the fact that Chelsea has complied with financial fair play should come as no surprise.  As I wrote back in September, it is unlikely that Chelsea will ever have a problem complying with FFP.  In fact, all the regulations do is cement Chelsea's place as one of the handful of clubs that are able to challenge for both domestic and European laurels year in and year out.

It is important to note that the January transfer window, and specifically the sales of Kevin de Bruyne and Juan Mata, had no bearing whatsoever on Chelsea's FFP compliance during this first monitoring period.  The first monitoring period covers the 2011-12 and 2012-13 financial accounts.  The January transfer activity falls under the 2013-14 accounts.

While Chelsea did lose nearly £50m during the 2012-2013 financial year, FFP accounting is much different than the accounting submitted to Companies House.  There are a number of write-offs that Chelsea will be able to utilise that will reduce their losses significantly for the purposes of FFP accounting (I will likely calculate an estimate of what Chelsea's 2012-13 FFP losses will be in the coming months).

While it is mandatory for Chelsea to reduce losses in 2013-14 to ensure that it remains compliant with FFP during the second monitoring period, the club will still be allowed around £38m in total losses over the 2011-12, 2012-13, and 2013-14 books.  The additional revenue stemming from the new Premier League broadcasting deal (~£25m annual increase) and the new adidas deal (£10m annual increase) will bring in an additional £35m annually.  When we also take into account the increased broadcasting revenue from the club's participation in the Champions League and the club's ability to consistently increase its commercial revenue, it becomes clear that Chelsea will generate significantly more revenue in 2013-14 than it has in any previous year.

Unfortunately, there have been several inaccurate reports in the media that mistakenly assume Chelsea sold Mata and de Bruyne out of financial necessity.  Of course, when one takes a look at the numbers, it becomes clear that Chelsea's finances are in order.  Further, it becomes easier to understand that the decision to sell De Bruyne and Mata was more about recognising the market value of these players, selling high on players that were surplus to requirements, and earning a considerable return on its initial investment as opposed to the misguided notion that the club had to sell assets in order to avoid FFP sanctions.

Now that we know Chelsea has nothing to worry about with regards to FFP, what does this mean for the other seventy-six clubs, some of which are in direct competition with Chelsea both domestically (Manchester City) and in Europe (PSG)?

Financial fair play expert Ed Thompson published a new piece last night in which he succinctly explains the new information UEFA provided.  His article is truly a must-read for those interested in FFP, and I encourage you to follow him on Twitter, as he often provides great insights as developments unfold.  Most notably, UEFA released an updated FFP timeline in their press packet, and it provides an excellent roadmap as to what we can expect in the coming months. 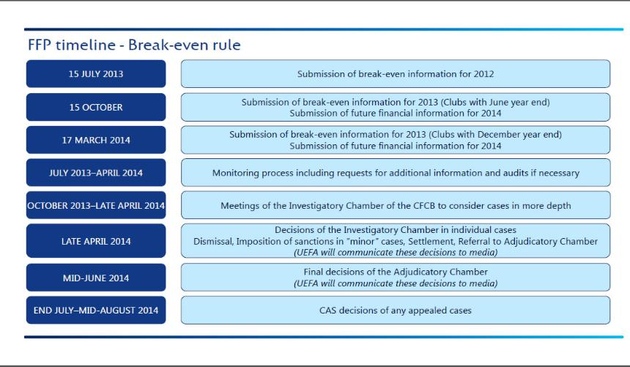 As the timeline shows, UEFA's Club Financial Control Body (CFCB) will render its investigatory decisions in late April and will decide on the more serious cases in mid-June.  Clubs will then be allowed to appeal the decisions in the Court of Arbitration for Sport (CAS), and those decisions will be rendered before the start of the 2014-15 season.

As Thompson notes, UEFA has deferred the decision-making to the CFCB, which it holds out to be an independent panel.  In theory, this would help insulate UEFA from legal challenges arising out of CFCB decisions, but it remains to be seen if a European court would define the CFCB as independent of UEFA.

Both PSG and Manchester City are thought to be on the list of seventy-six clubs.  However, just because they're on the list doesn't mean that they will face sanctions.  The list simply requires clubs to submit additional financial information, and it will be up to the CFCB to determine what, if any violations these clubs have committed.

If and when PSG or any other club is hit with a sanction that will in any way affect its plans for the 2014-2015 season, said club will not only spend considerable resources challenging the decision via CAS, but it will also challenge the legality of FFP in the European courts and will claim hundreds of millions of sterling pounds in damages.  UEFA is fully cognizant of this, and as such, will likely attempt to work with affected clubs on settlements.

For those of us who have been following FFP for years, the next few months will prove extremely interesting, and WAGNH will have you covered every step of the way.