There are five matches left in the Eredivisie season, and Vitesse currently sits in fourth place with 52 points.  For some context, Vitesse finished in fourth place last season with 64 points.  The club would have to win four of its remaining five games in order to match last season's point total.

That said, the Eredivisie is much more competitive this season than last season from to bottom and while the club faces an uphill battle for the coveted Champions League spot that comes with finishing in second place, it is still very possible.

As in recent weeks, we have the good fortune to be able to reproduce the Vitesse portions of the excellent loan reports that @chelseayouth puts out each week (you can read the full loan report here) -

Atsu, meanwhile, has set down a marker as one of Vitesse Arnhem’s players of the season and without much doubt (an honourable mention here to Zakaria Labyad) their standout performer since the winter break. He was in tremendous form on Saturday night away to Groningen and produced a delightful lob for his fourth goal in geel en zwart, but it came in a losing cause as the Arnhem club lost 3-1 to suffer a second straight defeat.

[The Ghanaian international] was one of the few visiting players to even do himself justice on the night but so impressive was he that he could have easily staked a claim for the man of the match award. Time and again he got the better of the Groningen left-back and came inside to dangerous effect, and was only denied more goals by some committed goalkeeping and defending.

The same positivity cannot be afforded to the other three Chelsea youngsters stationed at the Gelredome. Lucas Piazon returned to the starting eleven for the first time since mid-February as a replacement for the suspended Renato Ibarra but was quiet for large spells and ultimately contributed very little. Bertrand Traore played roughly half of the second 45 minutes and had a good shot seconds after coming on but then suffered the same struggles as Piazon, and Patrick van Aanholt was once again an unused substitute as Rochdi Achenteh held onto his left-back job.

Save for Christian Atsu, who had been very solid playing in a central number ten role before sliding over to the left wing and becoming a revelation, the Chelsea lads haven't been playing much for the club over the past five games.

Vitesse's European options for next season

Depending on where the club finishes in the Eredivisie table, it could have a relatively easy or an extraordinarily difficult path to success in European competition next season.

Vitesse's European options for next season
Van Aanholt's absence comes as a surprise, especially considering he was pushing for a spot on the Dutch World Cup squad and made his senior international debut earlier this season.  He was suspended for two games after picking up a straight red, but hasn't been able to regain his starting spot. Peter Bosz has decided to stick with newcomer Rochdi Achenteh, who came over from PEC Zwolle in January.
Van Aanholt decided to come back to Vitesse this season primarily because he wanted to give himself the best possible chance to earn a spot on Louis van Gaal's World Cup squad.  Given that van Aanholt is extremely unlikely to return to Arnhem next season, Bosz is likely using this opportunity to prepare for life after van Aanholt.

Vitesse lost to Groningen 3-1 last weekend, and perhaps taking a cue from the Vitesse defence, the usually-spetacular video team also had some problems this week.  The production value is great, as always, but it seems like an unfinished product.  Give it a watch and you'll see what I mean.

Vitesse likely needs to earn every single point from here on out in order to have a chance at Champions League football next season, and I hope that the club worked on fixing whatever caused the truly awful defensive performance from last week.  Defence has been a problem for Vitesse all season, so I wouldn't expect Peter Bosz to be able to get the squad to miraculously become the Chelsea back line, but some improvement is a must.

As expected, Vitesse has reduced the prices on its Nike merchandise to make way for the new Macron sponsorship.  If you're looking to purchase some Vitesse gear, the club has a fairly stocked web shop.  Everything Nike must go, so if you've been in the market for some Vitesse gear but haven't pulled the trigger yet, give the shop a look.

Some of our Cobham East cousins have been speculating on what the new Vitesse kits might look like.  Basing the design on Aston Villa's current kits, SV Vitesse forum member "BestSeller" came up with a nice mock-up (note that the Burgers Zoo shirt sponsorship is also speculation at this point, as Vitesse hasn't yet finalised its shirt sponsor for next season). 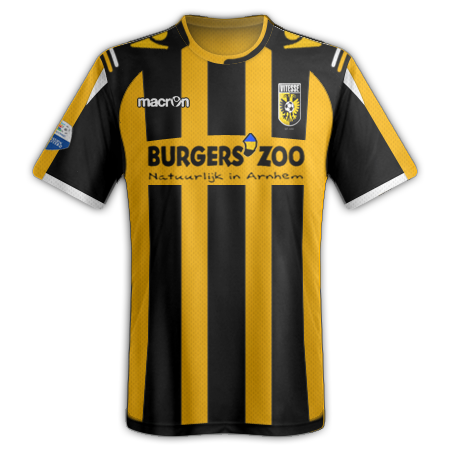