Chelsea's 30 loanees are more than twice that of any other Premier League club, save for Manchester United

Chelsea's policy of accruing as much young talent as possible is starting to pay off.

Share All sharing options for: Chelsea's 30 loanees are more than twice that of any other Premier League club, save for Manchester United

As first pointed out by @chelseayouth right after the transfer deadline closed last week, Chelsea currently has thirty loanees plying their trades away from Stamford Bridge.  After doing a bit of research, I found that Chelsea's has more than twice as many players on loan than any other Premier League club, save for Manchester United.

This time last year, Chelsea had 24 players on loan and the year before that, Chelsea had 14 players on loan.  As you can see from the chart, our loan numbers in previous years have always been high when compared to the rest of the Premier League, but the gap is widening and Chelsea continues to add to its loan contingent. 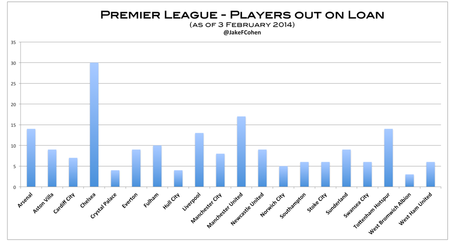 The increasing number of loanees is part the plan for the future Michael Emenalo, Roman Abramovich, and Bruce Buck have implemented.  In the era of financial fair play, Chelsea has smartly recognised that the club cannot continue solely rely on the highly-inflated transfer market to bolster its talent reserves.  The club must begin to build from within, and the loan policy reflects that.  Significant resources have been devoted to Chelsea's global scouting network and unique partnerships have been formed, like the one the club has with Vitesse.

For perspective, the 2013-14 FFP cost of the thirty Chelsea loanees is around £29.3m.  While not an insignificant sum, it means that Chelsea is only paying around £1m per loanee.  This is a very small price to pay to develop a player that Chelsea's scouting network once identified as special.  In addition, the better loanees not only have 100% of their wages paid by the borrowing club, but Chelsea also receives an additional loan fee that it can apply to the player's annual amortised transfer cost.  To wit, Romelu Lukaku, Thibaut Courtois, and Victor Moses will cost Chelsea a combined £2.5m this season.

Further, if you'd like to add the profit from the Kevin de Bruyne sale to the loan cost, the cost of Chelsea loanees is reduced to around £18.5m.  De Bruyne's value increased significantly due to his successful loan spell at Werder Bremen last year, and even though he wasn't able to crack the Chelsea lineup, the deal was an unqualified success from Chelsea's perspective.

Chelsea has a system where its scouts can identify talent, then place that talent somewhere else, check in regularly, and then watch that player develop into a valuable commodity.  In that sense, it's like playing the stock market with Michael Emenalo as Warren Buffet and Piet de Visser as Carl Icahn.  Of course, Chelsea has had its share of misses, but because each player represents such a small financial commitment, the club only needs a few players to "hit big."

It should also be noted because of the small financial commitment required of most of the loanees, even the "misses" allow Chelsea to do pretty well in some cases.  For example, Chelsea will record a £2.5m profit on the 2013-14 books from the sale of Jeffrey Bruma.  To reiterate, the combined 2013-14 cost of Romelu Lukaku, Thibaut Courtois, and Victor Moses is £2.5m.

In addition to de Bruyne, his Belgian compatriots Thibaut Courtois and Romelu Lukaku are already major successes.  Both will likely play major roles at Stamford Bridge next season, and if, for whatever reason, they're deemed surplus to requirements, each will fetch an extraordinary return on Chelsea's investment on the transfer market.  These three players alone make Chelsea's loan system well worth it, let alone the Piazon's, Bamford's, Zouma's, Omeruo's, and Chalobah's the club has waiting in the wings.

Chelsea is likely to continue to accrue as much young talent as it can find, and for those worried about youngsters eventually starting to shy away from Chelsea, there are very few clubs on the planet that can offer what Chelsea can in terms of wages and the prestige of being part of one of the few truly global clubs.  In addition, with the Vitesse partnership, if things continue to go well in Arnhem, Chelsea will be the only club on the planet that can offer its loanees Champions League football.