Are Chelsea relying more on Hazard this year than they ever have on Mata in years past?

We attempt the find an answer through game-changing goals, assists, and secondary assists. Short answer: inconclusive. Maybe. Let's call it a draw. Though Hazard undoubtedly does it in a more exciting fashion.

Share All sharing options for: Are Chelsea relying more on Hazard this year than they ever have on Mata in years past?

We've spent the last two years at the mercy of a gentle Spanish hobbit.  When he was on, Chelsea were on.  When he wasn't on (figuratively, or literally), Chelsea weren't on.  Last year alone, Juan Mata directly figured in 76 of Chelsea's 147 goals (52%), producing a goal, assist, or secondary assist at a rather astonishing rate of one every 65 minutes.  Over his two full non-Mourinho seasons, Mata had 122 points (think hockey-style scoring) in 118 appearances.  He was worth essentially a goal/game.

Compared to that, Eden Hazard has room to grow.  He was second in scoring last year with 57 points in 62 matches (79 minutes-per-point).  This year, he leads the team with 32 points (14 goals, 10 primary assists, 8 secondary assists - directly involved in 46% of Chelsea's 70 goals) but only at a rate of 88 minutes-per-point.  Though that latter part has quite a bit to do with the systemic changes introduced by Mourinho, which have resulted in a lower scoring but more solid* Chelsea side.  Incidentally, this has also upped the percentage of game-changing goals for the entire squad from 52% in 2012/13 to 61%.

* Through 39 matches, Chelsea are averaging 1.79 goals scored (including the three own goals), but only 0.77 conceded; last season the record after 69 matches was an average of 2.13 scored, but 1.19 conceded.

Be sure to follow the links above if you're new or have forgotten how I like to count assists and game-changing goals (and GCG+).  Now that you're qualified, let's check out the scoring numbers for the entire squad: 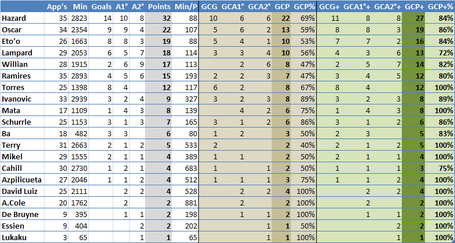 I almost didn't include the GCG+ portion (green shade), as Chelsea - without any Ancelotti-style blowout wins except maybe the 4-0 away to Steaua Bucharest - have only scored nine goals all season that weren't true or almost game-changers.  Nine.

Much like Mata of years' past, Eden Hazard is head-and-shoulders above everyone else in these scoring statistics.  He's the team leader in goals, assists, and game-changing goals, and tied for the lead in most of the game-changing assist departments.  The only category where he's second is secondary assists, which is where Willian has made his living.

Joining Hazard at the top in the minutes-per breakdown is, surprisingly, Samuel Eto'o.  Oscar was close as well, before hitting his recent rough patch that has seen him tally just one point (the free kick against Stoke) from Chelsea's last eleven goals.  Though before then, he either scored or assisted on six of Chelsea's seven, so I'm sure his form will come around soon.

Once we fudge for the Mourinho-factor, Frank Lampard, Ramires, Branislav Ivanovic, and Fernando Torres are all about where they were at last season.  Juan Mata was well off the pace, while Cesar Azpilicueta and David Luiz's numbers both show the effects of their increased defensive responsiblities.  Meanwhile, Mikel is having a vintage season and Demba Ba's small-sample returns have been excellent.