Everton's improvement under Roberto Martinez has majorly concerned their style of play, rather than results - they are only three points ahead of last year's pace (45 compared to 42 at this stage in 2013) and in fact are further adrift of fourth place than they were last year when they trailed Tottenham by six points, rather than eight as it is now albeit with a game in hand on Liverpool), but are benefitting from the Spaniard's emphasis on positive, possession-based football, which has certainly made them a more entertaining side to watch. 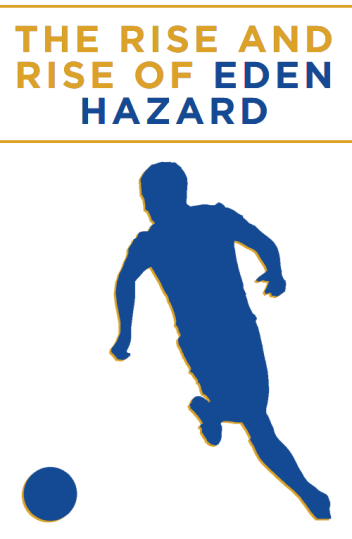 The Rise and Rise of Eden Hazard

Importantly, Martinez has maintained the spine of David Moyes's final side. Whatever your opinion of his current tenure at Manchester United, there's little doubt he did a fine job at Everton, instilling a solid defensive unit that boasts great cohesion and understanding. The usual back four of Leighton Baines, Sylvain Distin, Phil Jagielka and Seamus Coleman has recently been disrupted by injury, but should feature against Chelsea.

Jagielka is the more proactive defender and marks strikers tightly, leaving Distin to cover in behind. The Frenchman always seems more uncomfortable tracking opponents upfield, and can be particularly vulnerable when dragged out towards the flanks, although that's only when forced into 1v1 situations - he's otherwise excellent at sweeping in behind the space vacated by Baines' forward movement. Gareth Barry also drop into deep, left-sided positions to cover, allowing the left-back to storm forward in attack - no other Premier League side focuses so much of their attacking down their left.

Baines most frequently crosses from wider, deeper positions, but also drives forward to the by-line to provide dangerous cut-backs, linking up nicely with Steven Pienaar to allow the winger to drift inside. Coleman, too, gets forward down the right, providing width up and down the touchline on the outside of Kevin Mirallas - it's a more attacking combination than that favoured by Martinez's predecessor, but with lots of attacks flowing down the flanks, not a drastic change in approach.

Like Barry for Baines, Coleman too is covered by his 'closest' central midfielder, with James McCarthy happy to slide across when the full-back is caught upfield. However, McCarthy's more aggressive than his midfield partner, Barry, and is more likely to motor forward into attacking positions - his goal return is poor, however, and is more effective from a defensive perspective.

At the tip of the midfield triangle is Ross Barkley, who finds space away from opposition midfielders by moving towards the channels and helping progress moves into the final third. Manchester City's strikers, particularly Stefan Jovetic, found space last Saturday by moving to the 'outside' of John Obi Mikel and Nemanja Matic, in the space between the double pivot and wingers, and expect Barkley to position himself in similar zones, looking to receive passes to feet before turning forward into attack. He's also strong on the ball, and uses that physicality to dart away from markers and create space for ambitious shots from range.

To his right is Mirallas, who varies his position according to opponents - sometimes playing narrow to help overload between the lines, but more often sticking wide, looking to receive passes to feet before taking players on with his dribbling and driving towards goal. He's also very quick, and sometimes latches onto passes in behind, particularly because he sits slightly higher up the pitch without the ball making him an obvious outlet for counter-attacks. To make a cheap, Belgian-inspired comparison with compatriot Eden Hazard, he's struggling to maintain consistent numbers of goals and assists - a bit like the Chelsea winger before his transformation under Jose Mourinho.

Martinez has options in this position, however, and Gerard Deulofeu is a similar option to Mirallas from the bench, his directness useful in stretching opponents late on. He's inconsistent, and lacks focus with his defending - in short, the ideal 'raw' youngster for Everton to strengthen their squad depth.

Martinez likes strong 1v1 players in wide positions, clear with the signing of Aidan McGeady in January - decent defensively, and a 'dribbler' going forward, he varies his running both down and outside his man but generally looks to cross into the middle from wide areas.

Upfront is Everton's dilemma. With Lukaku injured - and unavailable against his parent club, anyway - and January signing Lacina Traore still recovering from injury (although he started in Sunday's FA Cup tie against Swansea), Martinez will probably choose between Steven Naismith or Kevin Mirallas upfront, having preferred to use the former through the middle in their last Premier League clash against Tottenham despite having extensively hinted that the Belgian could be used more centrally in the second half of the season.

Naismith was key to Everton's dominance of that match against Spurs, and also proved more effective than Traore off the bench in the FA Cup - provided he recovers from a concussion injury that forced the substitute to be substituted, he should start here. He's a bit of an atypical striker - not particularly dominant in the air or clever linking up play, but intelligent with his movement between opposition full-backs and centre-backs and always looking to work the channels.

In doing so, he opens up pockets of space behind him for the attacking midfielder, with Leon Osman benefitting greatly from this against Tottenham (and indeed, the relationship between the two evidenced there could mean Osman replaces Barkley in midfield). Naismith was particularly keen to work the left and would presumably play a similar role here, working the area in and around Branislav Ivanovic and Gary Cahill. Naismith's energy should also be noted - it was his pressing that led to the crucial turnover against Swansea, wherein the Scot pounced upon a loose Swansea pass to give his side the lead.

It's entirely feasible, of course, that Traore starts - but it's more likely he'll be a useful option off the bench for Martinez.

Liverpool recently thrashed Everton 4-0 by effectively executing two seemingly opposite approaches without the ball -first pressing high up the pitch in the opening minutes to put Everton's defenders under direct pressure, then later sitting deep and absorbing Everton's long periods of possession as they chased the game. The consistent theme was the directness of their attacking, as Liverpool countered quickly through their forward trident of Daniel Sturridge, Luis Suarez and Raheem Sterling, supported by Jordan Henderson and Phillipe Coutinho behind. Liverpool's best chances (and goals) came from immediate transitions, with Sturridge scoring his second from a simple Kolo Toure pass over the top. That's an important point - it's not so much how Liverpool were defending, but how they were utilising that in order to attack immediately.

Sturridge particularly benefitted from stand-in right-back John Stones' bravery going forward, as the youngster pushed high up the pitch to attack Aly Cisshko - but this, of course, left Sturridge free down the left flank, where he ran rampant. As it is, Seamus Coleman will start at right-back, and is more intelligent with his forward movement - he surely wouldn't be as bold up against Hazard as Stones was against Sturridge.

This Chelsea side is, of course, at best attacking space in behind opponents quickly (having struggled against deep defences in recent weeks), and in this regard, should benefit from Everton's positivity under Martinez.