Fernando Torres and the Art of Terrible Finishing: Third year is the charm?

These are the stories of Torres FC.

Share All sharing options for: Fernando Torres and the Art of Terrible Finishing: Third year is the charm?

In business, goods that are not expected to have a useful life beyond three years are defined as non-durable or soft goods (i.e. consumables). Fernando Torres passed his 36-month anniversary* at Chelsea a few weeks ago, thus graduating to non-consumable, enduring status. Any usefulness though is still up for debate.

Since the last time we checked in with Fernando's finishing ability, he's amassed a whopping five league goals. He's scored several more in the Europa League and earlier this season in the Champions League, but thanks to the initial conditions that were set up for this multi-year psychological experiment, we're only counting domestic league numbers in a basic attempt to create a somewhat level playing field (data from ESPN and Transfermarkt as before).

While easily above his efforts from Year 1, Year 3 Torres pales in comparison to Year 2 Torres. Yes, it is a bit unfair that the Zorres alter ego only came out to play in the Europa League but it's probably most unfair on all of us, rather than ol' Fernando. To his credit, he has improved his shot conversion (Trgt Pct.: goals / shots-on-target) in each of his three years here. 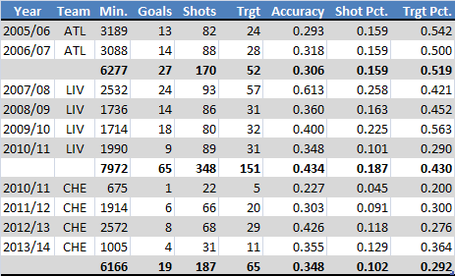 If we break it down by seasons rather than Torres-centric years, you could make the argument that Torres is showing the best finishing yet for us under Mourinho, or at the very least that he didn't regress to the pitiful efforts from the first season. Low expectations are a wonderful thing!

One thing I'd like to point out: his Chelsea career percentages match almost exactly his percentages from his final half-season at Liverpool. So, basically, the Torres we have now, this is the Torres we paid for. It's not going to get any better, though it did get much-much worse for a while. We've found our level. So... yey? 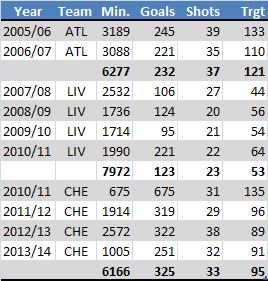 Looking at it from a per-minute angle, we once again find that this season has been his most productive yet for Chelsea in the league, scoring once every 250 minutes or so. That's really not that much worse than his Atlético days, though still trails far behind anything he's ever accomplished at Liverpool. 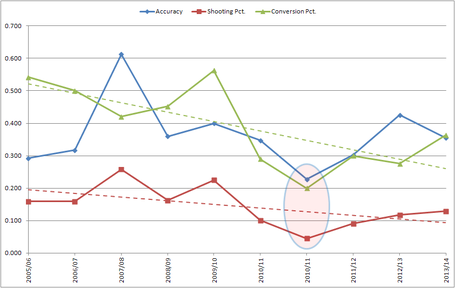 Still, at least we can close the book on First-12-months Torres. The percentages are trending, however gently, in the right direction. It's probably not going get that bad again.