On transfer fees and inflation

Taking a look at how various inflation rates affect how we view Premier League transfers.

Share All sharing options for: On transfer fees and inflation

After seeing a list of Premier League transfers costing over £20m that Nick Harris at Sporting Intelligence put together, I started to wonder what that list would look like when factoring in inflation.  Calculating every major transfer fee in Premier League history into a present-day value would provide a great resource for comparing transfer fees from different years, and might alter some perspectives and challenge some assumptions on the value of certain deals.

For example, Didier Drogba and Robin van Persie, both excellent strikers, were each sold for £24m, but surely £24m was worth a lot more in 2004 than it was in 2012, right?

Most Chelsea supporters would agree that having the privilege to watch Didier Drogba in blue for eight years was amazing value whatever the cost, but as you'll see when looking at the the various lists, the rates of inflation will definitely provide some food for thought with regards to some of the other deals made not only by Chelsea, but also the other Premier League clubs. 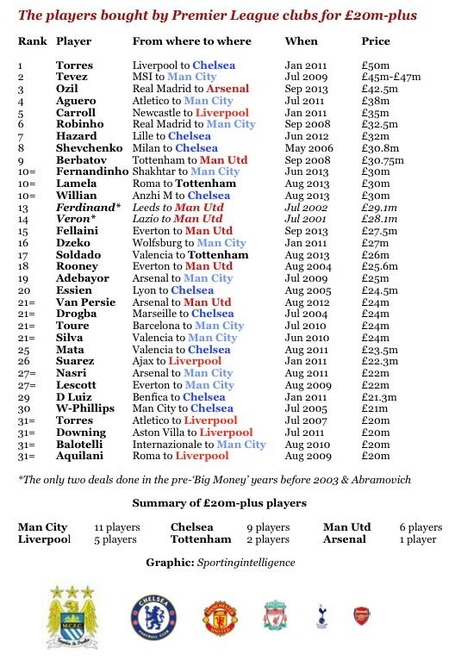 The Retail Price Index (RPI) is a measure of inflation kept by the UK's Office of National Statistics and tracks changes in the costs of standard goods and services. As we'll discuss in a bit, there is a much more nuanced inflation rate available in the Transfer Price Index (TPI), but there is some value in looking at transfer fees in the context of standard goods and services, as that is primarily how we feel the effects of inflation.

For an example of RPI inflation in action, how many of us have heard our fathers tell us that while making the seven-mile trek to school barefoot in the snow, they could pop into the shop and get a muffin for a ha'penny? Were I to eat my first carb since 2004 or find a Dunkin Donuts in Boston that accepts British currency, that same muffin would cost me about £1 today. 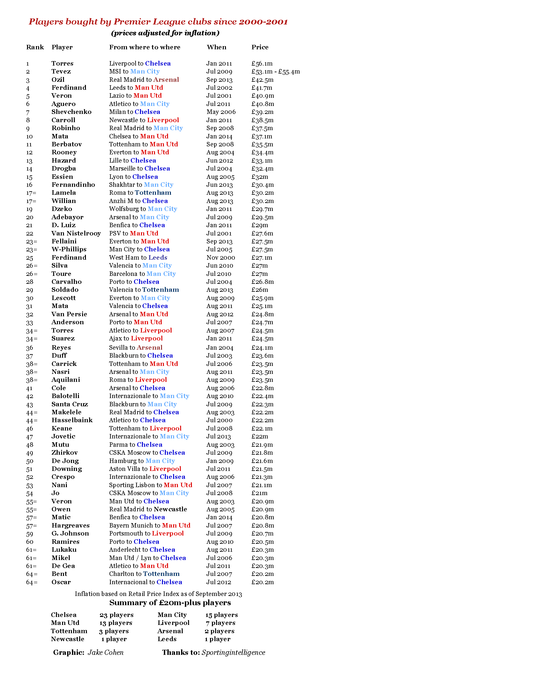 The Transfer Price Index is a significantly more nuanced way of calculating inflation than relying on the Retail Price Index.  Created by Paul Tomkins and Graeme Riley back in 2010, the TPI essentially calculates how much money was available in top-flight English football in each season and then determines the ratio of each transfer fee to the available money to calculate what each transfer fee would be in terms of present-day value.  Tomkins and Riley call this the "Current Transfer Purchase Price," or CTPP.

Tomkins explains the TPI in detail and provides some much-needed context on his excellent site, The Tomkins Times.  I highly recommend reading the article, bookmarking the site, and following Paul on Twitter.  Despite being geared towards Liverpool supporters, I find myself checking the site daily, as a lot of the work Paul and his colleagues do has applications that go far beyond Anfield.

The significant rise between 2012-13 and 2013-14 is due to the new Premier League broadcasting deal kicking in this season.  For context, each Premier League club will receive, on average, £83m per year in broadcasting revenue under the new deal.  Last year's winners, Manchester United, earned the biggest slice of the pie due to the revenue sharing being directly tied to 1) where the club finishes on the table, and 2) how often the club's matches are shown on television.  Manchester United received just under £61m last season, which was the largest amount of domestic broadcasting revenue ever received by a Premier League club.  This year's winners will receive upwards of £100m.

While transfer fees don't provide the entire scope of a club's financial commitment to a player (of course, wages play a significant role), it is still an extremely worthwhile exercise to compare transfer fees through the years as adjusted for inflation.  After looking at the lists, what jumps out at you?  For me, the Sean Wright-Phillips business was a much bigger disaster than I originally thought.  In addition, the TPI list does a great job of listing which manager bought which player, and as you can see, Jose Mourinho features heavily.  Feel free to share your thoughts in the comments section.