Being a football supporter is a peculiar thing at times. You are blind to your own faults; though equally culpable of ignoring the merits of the opposition. When Cesc Fàbregas was linked with and subsequently signed by Chelsea in the summer I went through these phases. Why is Barcelona letting him go? Does he still have it? Where would he play? You immediately look at the negatives in such a situation: ignoring the fact that he was arguably the best midfielder in the country when he left Arsenal.

The impact of Fàbregas' return to the Premier League could hardly have been greater. He is becoming the conductor of a wonderfully fluid attack, whose intricate passing and subtle movement create a crescendo of relentless pressure that few can survive. What is frighteningly evident is that there is also a lot more to come from the Spaniard. Through his set piece delivery or adroit capacity to create shooting opportunities for teammates he is almost worth a goal a game. Fàbregas should represent the atypical Mourinho midfielder: however, he has drastically altered the attacking dynamic of this Chelsea side.

Things are undoubtedly clicking for this side at the moment. Tormented by teams who sat deep and defended for what felt like an eternity, there is a case to suggest this is no longer a huge concern. Growing up in an Arsenal side that, begrudgingly, was fluid and easy on the eye laid the foundation. That base was expanded upon by playing a multitude of roles in Barcelona's tiki-taka system. Concluding with the national team where the finishing touches to his footballing education were seemingly applied. Mourinho has actually taken Fàbregas a step further.

From our opening game until our latest win over Schalke the maturation of Fàbregas as a player has been salient. Fàbregas' ability to self-diagnose the problems his own pressing was causing represented a footballer completely in tune with the game. Those gaps in the midfield area against Swansea are rarely seen now. Fàbregas has subsequently been able to transform himself from a Guardiola player to a Mourinho one. It is a testament to his footballing IQ that this has happened in such a short space of time. Concerns about his ability to play with Matic in a pivot have subsided. We acknowledge he is never going to be smashing people like Michael Essien, but he is contributing defensively in a way many did not think possible.

Our success, so far, has stemmed from an ability to win matches in a variety of ways. Where the requirement is that we play a patient game and look to move the opponent about Fàbregas is the master locksmith. The speed of passing, the incisiveness and the vision he has will eventually unlock any side. Forget statistics for one moment. Yes, his key passes and assists record is a good barometer of just how well he is playing. Nevertheless, taking a step back and actually watching how he plays is where his true beauty lies. We have likely never seen a player pass the ball as well as Fàbregas at this level. No pass is too difficult or too risky: the aggression he has on the ball and willingness to take ownership of our tempo is magnificent. When paired with the movement of Costa, Hazard, Oscar and Willian the variety in Fàbregas' game has proven deadly.

You are unlikely to see a statistic suggesting that Fàbregas often picks the perfect pass or the aggressive option. He is not content merely recycling the ball and he implicitly trusts the recipient to maintain possession. That is the biggest difference to a team spearheaded by Diego Costa and with Oscar as a number ten. Watching Fàbregas really is about as close to watching football artistry as possible. The ball he played to Willian for Drogba's tap-in was utterly mesmeric. He sees things on the pitch that you cannot even see developing in the stands. To quote Joe Cole on Makélélé, "he finds you when you don't even know you're open".

We have already witnessed some moments of breathtakingly gorgeous football from Fàbregas this season. The half-volley clip to Schürrle against Burnley, that goal at Crystal Palace and a plethora of intricately worked moves that leave you just wanting to stand and applaud. To think that we are not even in December yet and he is already playing at such a high level is incredible. The partnership with Matic looks wonderfully balanced and yet can still be improved upon further. He has the kind of telepathic relationship with Diego Costa that you dream of watching. Reacting to the slightest movement in the striker or feint, the ball is launched perfectly over 30-40 yards into Costa's path. You know it is coming, but stopping it is another matter. 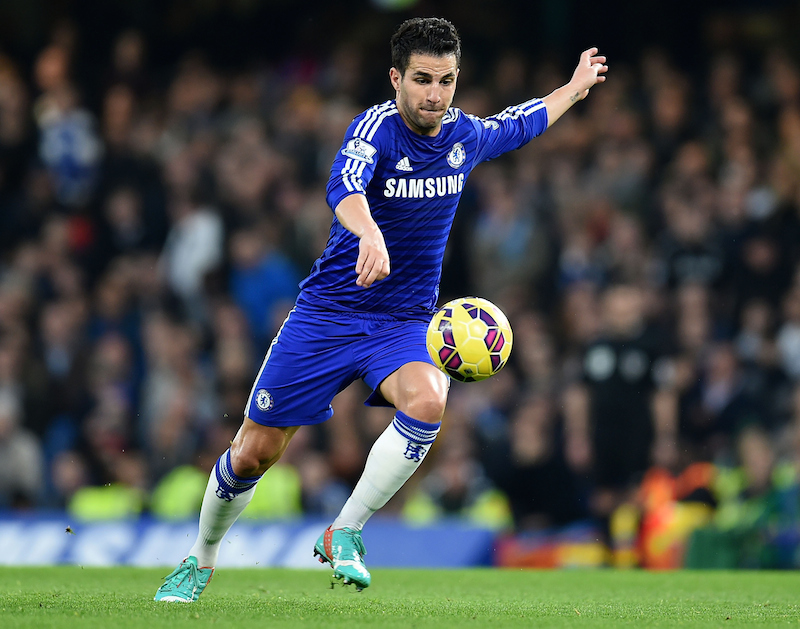 In many ways Fàbregas is built for the Premier League. That perfect cocktail of his early years at Arsenal melded with the refinement he underwent at Barcelona is potent. He was simply built to play a tempo that Barcelona was uncomfortable with. Their patient possession based football rarely allowed for the direct passing quality Fàbregas possesses to flourish. It explains Diego Costa's ordinary form at international level, while he played in an exceptional Atlético Madrid side that were relatively like the Chelsea side he now dominates.

Even his whole demeanour has moved on from his Arsenal days. After another wonderful performance against Schalke Fàbregas proclaimed "I didn't come here to just play well and that's it. I came here to win trophies and if I could play well and enjoy myself, all the better". He also gave a fascinating insight into the tactical evolution of the current first team, "[...]the most important thing for me is we know what we are doing, we know when we defend, when we have to attack, when we slow the pace, go quicker. I think right now, we are doing that very, very well".

His relationship with both Matic and Oscar is crucial as they form a powerful triumvirate through which all of Chelsea's play develops. On playing alongside Matic and with Oscar he said "I feel more in control of the game, I touch the ball all the time, I feel happy, I go and get the ball from here, from there, I can go forward, Oscar drops deep. I feel free, I feel confident, I feel in control and that's what I like most in football". Most importantly though he recognises that "[...] this team can be very, very good, but we have to win trophies".

To put Fàbregas into proper perspective he was £15m cheaper than Mesut Özil, cheaper than Ander Herrera and only £2m more than Adam Lallana. Fàbregas is entering his peak and playing, in his own estimation, the best football of his career. Özil looks half the player he once was, I am unsure Herrera was ever worth significant money and Adam Lallana is currently miring in mid-table obscurity. In a world where understanding value and numbers in football is becoming more transparent by the day, that is wonderful business however you choose to look at things.

Ironically, what his success shows is that all this talk about Mourinho inhibiting players could not be more wrong. Fàbregas, Hazard, Oscar, Willian and others are absolutely flourishing at present. Such is the tactical understanding of our attack that in discipline Mourinho has procured an unerring sense of freedom. Fàbregas was on the wing Tuesday night, Hazard slipped into the number ten slot as Oscar dropped alongside Matic. It was a natural piece of play that is becoming the hallmark of this Mourinho side. While describing football as a "brand" irks me, we are playing with a style and panache reminiscent of the side of the 1970s and late 1990s. Fàbregas is at the heart of this evolution.