Unlike last season's monthly (or thereabouts) round-ups, this year we've been doing individual, per-match reports on your community player ratings votes.  Since we're right around the halfway mark, it's time to a look at a bigger picture for a second.  As always, be reminded to not put too much stock into these things.  It is all just a bit of fun.  Usually. 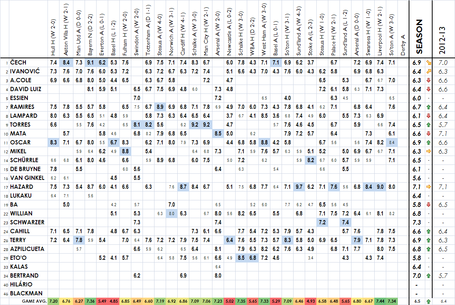 What all the fake Futura, Microsoftified Gill Sans, and (bleh) Arial Narrow above will tell you (especially if you click on it twice to make it legible) is that while the festive period has filled us with oodles of hope and excitement, we've been somewhat inconsistent over the vast majority of the season.  As if you needed a sobering reminder, right?

Only three players have garnered a ratings average of at least a 7.0, and two of them are just backups with small sample sizes.  Eden Hazard is the third and your clear leader so far for player of the season.