How do visiting goalkeepers fare at Stamford Bridge?

Share All sharing options for: How do visiting goalkeepers fare at Stamford Bridge?

I was looking through Twitter earlier, as I am wont to do, and I came across an interesting table from the Evening Standard. Rather than describing it, I'll just embed it:

No keeper has left the Eithad with a clean sheet this season. Here's how long they have held out... #MCFC pic.twitter.com/zQvyTSBQz6

Much has been made of Manchester City's home form this season, but Chelsea's hasn't been anything to sneeze at. The Blues have lost once at Stamford Bridge all season (are in the process of buying the player who orchestrated that loss) and in the league they've notched an impressive ten wins in eleven games. They've also managed to score in every home game, meaning that we can quite easily make a Chelsea version of the above table. So let's do it. 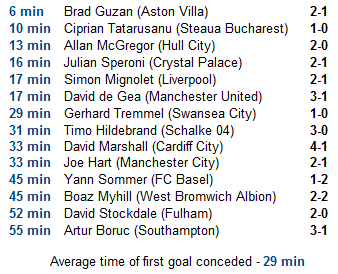 There have only been two home games this season in which we haven't gone into the break with a goal*, and both of those have been wins. We score our first goal, on average, two minutes after City do. And we concede 0.8 goals a game, which is actually less than Manchester City's 0.9.

*Amusingly, the only two matches in which we didn't secure a positive result was when we scored in first half stoppage time.

The difference between the two sides' home form is that City are better at turning close wins into routs, which is obviously fantastic for the nerves and excellent for the goal differential. But while they've been very impressive at the Etihad, it's also difficult to ignore what Chelsea are doing at Stamford Bridge.