I know everyone's feeling a little blue over the Juan Mata situation, so here's something to cheer us all up -- Chelsea are, for the first time in four years, coming close to matching our title-winning form of 2009/10 again. During the double season, the Blues claimed 86 points; since then we've grabbed 71 (2nd), 64 (6th) and 75 (3rd). Chelsea haven't been a credible title threat since early spring of 2011, and this year we're right in the mix thanks to an extraordinary run which began just after the loss at the Britannia in December. 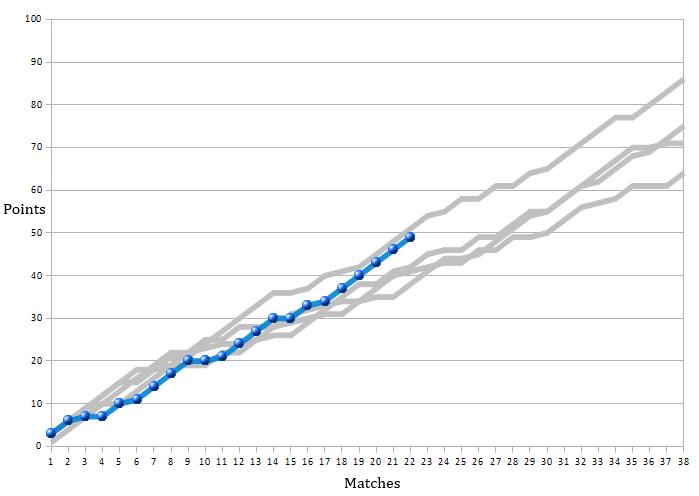 The above graph shows the four prior seasons in grey, game by game, with the current one marked in blue. Earlier this year, we were on course for another middling run, and for a while we were actually having one of our worst seasons in recent memory. That's changed recently. Thanks to a very strong run of form, Chelsea's 2013/14 season is now rising to meet the 2009/10 line, and should the next couple of results go our way (one of them, admittedly, is the most difficult match of the year) we might actually be above it fairly soon.

All I was hoping for out of the season was to have a credible league campaign. We've had two years of looking up wistfully at the also-rans, let alone the champions, but this year Chelsea are holding their own. There's plenty of football left to be played and certainly some stern challenges ahead, but for right now we can be very happy with the way the season's gone.