How not to defend corners, by Manchester United

Share All sharing options for: How not to defend corners, by Manchester United

After Manchester United's 3-1 loss to Chelsea on Sunday, David Moyes claimed that the only difference between the two teams was a pair of set pieces. Which, from a certain point of view, is true. The two decisive goals came from corner kicks; had they been defended better, the Blues would not have had a three-goal cushion with a quarter of an hour to spare.

But what Moyes is missing is just how badly his side defended for those two goals. Let's take a look at the first.

Chelsea win a corner after a David Luiz free kick hits the wall and balloons out of play. Said corner isn't very good -- it's aimed at the near post but doesn't get deep enough, leaving Danny Welbeck to clear: 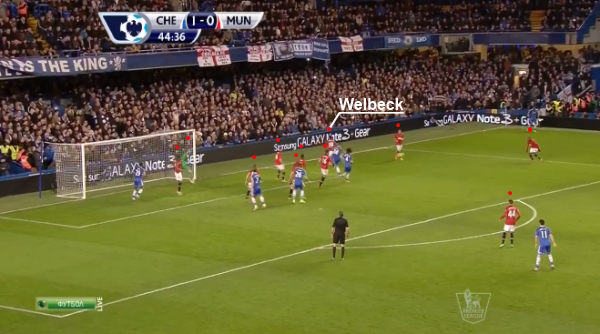 Note that there are eleven United players marked in this image -- there's nobody to challenge for the ball up the pitch, which is where Welbeck has directed his clearance. This means possession is back with Chelsea, and the visitors need to re-establish an open-play defence. 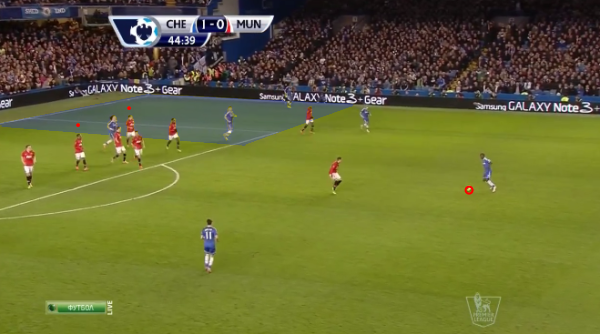 The United fullbacks, marked in red, have both ended up centrally on the corner. This leaves them with zero wide defenders, and neither moves to close off the obvious pass in blue. On top of that, there's no immediate pressure on Ramires apart from the defensively-useless figure of Adnan Januzaj -- Chelsea essentially have a free attack at this point. And on top of that, Nemanja Vidic (offscreen) is three yards deeper than the rest of his teammates, destroying their line. 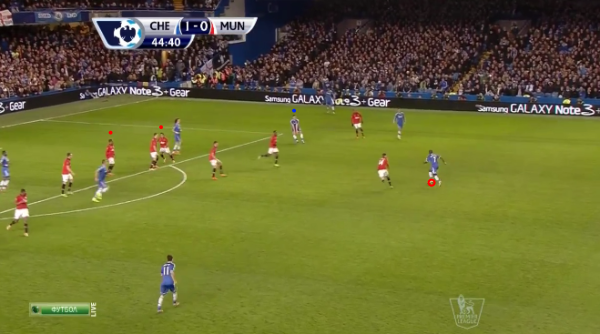 Gary Cahill (blue) is screaming for the pass; neither Rafael nor Patrice Evra have moved into a position in which they close off the space that he'll attack. United's defensive resources are then concentrated on the area between David Luiz and Samuel Eto'o, where they are marking nobody. 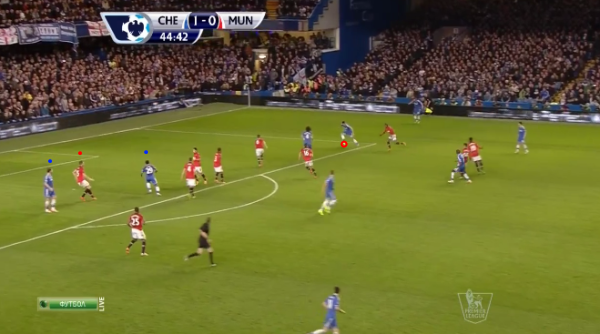 Ramires makes the correct decision, giving Cahill the ball, and suddenly both Vidic's positioning and the presence of that cluster of red shirts become obvious errors. Chelsea have a two-on-one overload against Vidic, with (both blue) Samuel Eto'o to his right and Branislav Ivanovic on the left, and thanks to Vidic being deeper than the rest of his team none of the five United players stationed between Cahill and Eto'o are in a position to block the cross.

And the full backs are still standing in the middle -- one of them isn't even watching the play. 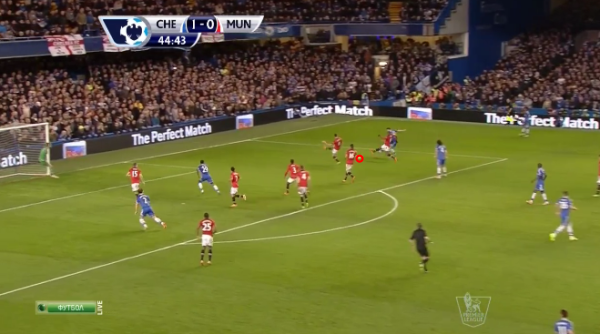 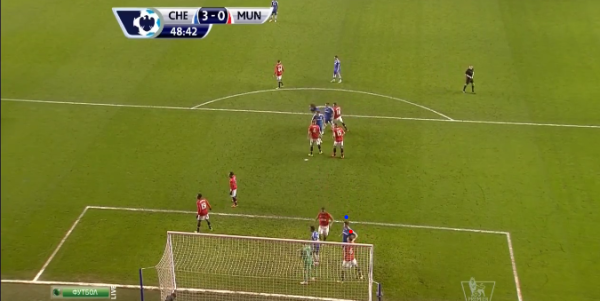 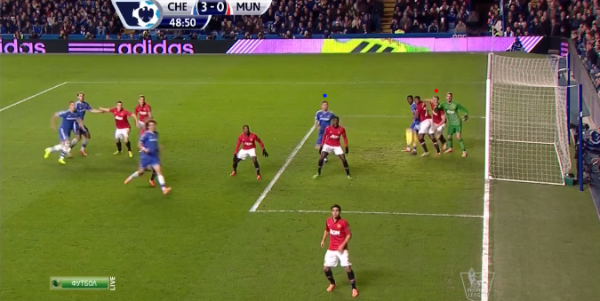 Whoops. The centre back gets caught between Antonio Valencia and David de Gea -- it almost looks like the goalkeeper thinks Evans is a Chelsea player and tries to block him off with his arm -- while Cahill runs around the back of the tangle of bodies and gets a free header (this would have been less likely to happen if United had been using zonal marking, incidentally). De Gea saves the first effort; Eto'o taps in the rebound despite an attempted foul by Valencia. 3-0.

So yes, from a certain point of view, the difference was two set pieces. But from those set pieces, Chelsea were handed two goals on silver platters thanks to a cavalcade of incompetence. The real story of the match was that Manchester United made some catastrophic, unforgivable errors, and Chelsea took advantage of them.