People love a good shirt number.  Skinny, round, single, or double, it doesn't matter; they're cause for all sorts of celebration, consternation, conversation.  Some are based on playing position, some are personal, and some are just plain ol' numbers.

It's the latter category that Samuel Eto'o's squad number appears to fall into, for Chelsea's newest striker and newest player - who wears #9 for his country and used to wear #99 for his previous club - has chosen to wear #29 for this season.  At least as shown on UEFA's website: 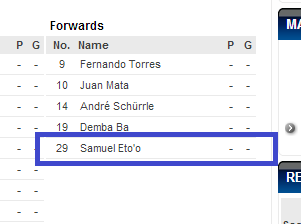 While Chelsea's official website does not confirm this, they were also incredibly slow in confirming all the other squad number changes for this season, so it's probably not something to worry about.  If you had your heart set on a shirt in a lovely shade of blue with ETO'O on the back, it's now probably safe to dip into your slush fund and procure one just like it.  Unless of course you're holding out hope that UEFA is lying to us and Eto'o will actually opt to rehash his awesome #99* from Anzhi.  Or perhaps 9'9?

* the Premier League does allow any shirt number between 1-99, as long as it's assigned to one and only one player per club

Unsurprisingly, the number twenty-nine shirt ain't got much history at Chelsea.  Following Robert Huth's departure, it lay discarded and unloved for many years before Demba Ba picked it up for a few months last season.  Others wearing it have included Neil Clement and Joe Sheerin, who have a grand total of five career Chelsea appearances combined.  Sheerin, at least according to Wikipedia, is a proud owner of a Premier League record though:  shortest career.