Analysis: Breaking down the Sigurdsson goal

Share All sharing options for: Analysis: Breaking down the Sigurdsson goal

Chelsea didn't exactly get off to a great start against Tottenham Hotspur. 19 minutes in, the Blues found themselves down 1-0 thanks to a Gylfi Sigurdsson goal, and they had an uphill battle to climb to avoid a loss. That they did so -- and looked rather nifty in the process -- is great and all, but let's take a look at what happened to put us in a hole in the first place. 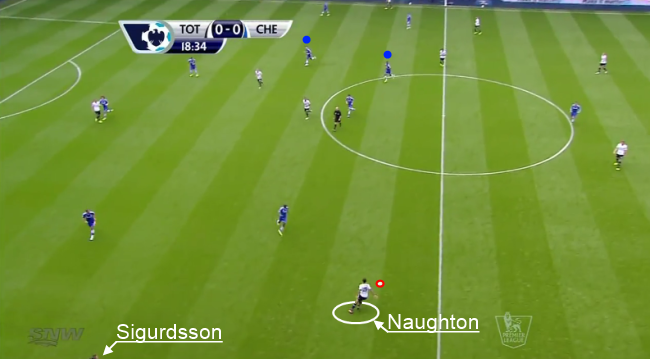 It all looks rather innocuous, doesn't it? A cross-field ball to Kyle Naughton has left Chelsea's midfield (pivot marked in blue) a little out of position, but that's what cross-field balls do, and there's no real threat just here. Both Naughton, and Sigurdsson, who's offscreen, are covered, and the most promising crossing lanes are cut off. This isn't the sort of situation you'd expect to be resulting in a goal. 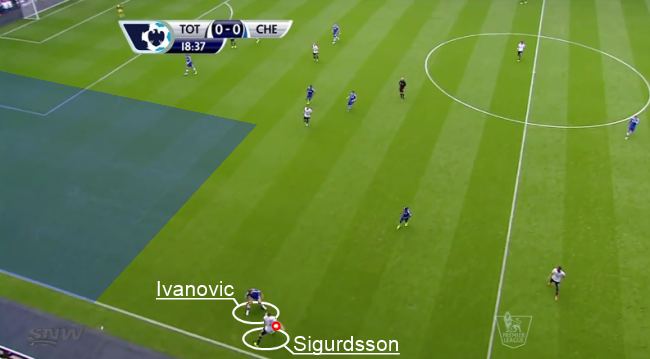 Naughton passes to Sigurdsson, who's immediately closed down by Branislav Ivanovic. That the fullback has been drawn so far up the pitch means that there's space (shaded) in behind him, but there aren't any Spurs players in real position to attack said space. In order to progress, they need to come inside -- but by now Chelsea's pivot is now back in good shape. 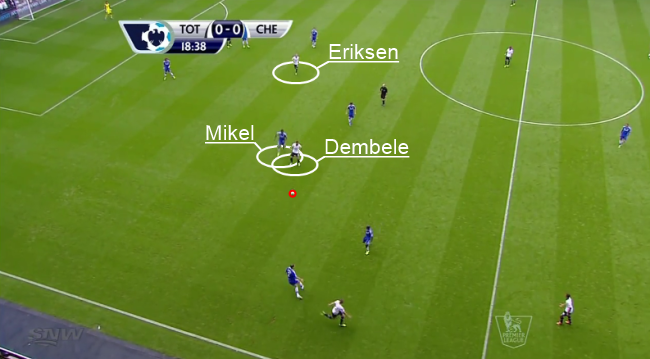 Come inside they do. Sigurdsson drops back and then passes to Moussa Dembele, who's being closely watched by John Obi Mikel. With Sigurdsson moving in the wrong direction for a one-two down the wing, Dembele's only passing option is to Christian Eriksen further infield. Mikel's job, then, is to pressure the Belgian while also denying him the pass to Eriksen, holding him up for long enough for Oscar to arrive. 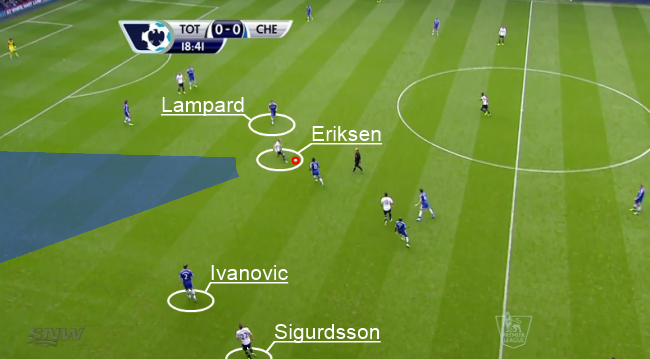 Instead of delaying, however, Mikel tries for a tackle. It's almost impossible to knock Dembele off the ball at the best of times, and trying it from behind is a pretty pointless play. Unsurprisingly, Mikel can't secure possession, and, indeed, his challenge pulls him out of position to block off the pass to Eriksen. Dembele, off balance, is able to find the former Ajax man.

What happens next? That space behind Ivanovic is still exploitable, but Eriksen's not in great position to use it -- he's receiving the ball on the wrong side of his body and there's no way that he'll be able to find Sigurdsson with a ball into that zone. But when good players find themselves in not-great position, they figure out a way to get out of it, and in this case Eriksen pulls off a beautiful turn and explodes towards the corner flag. 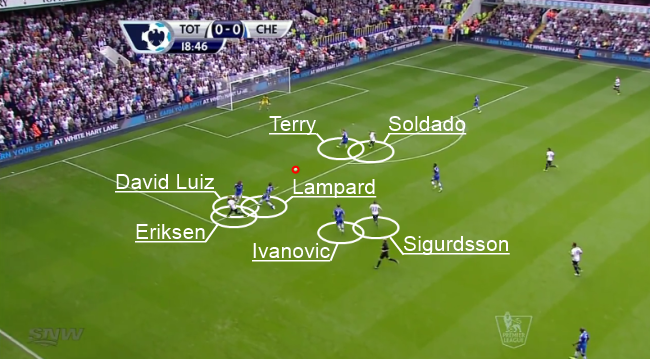 Eriksen's run has pulled David Luiz and Frank Lampard wide to cover. With Ivanovic still following Sigurdsson (although he's not trying that hard: the Iceland international's managed to overtake him), David Luiz didn't have much choice but to come across and leave John Terry one on one against Roberto Soldado.

In order to get anything out of the situation, Spurs needed Soldado to shrug Terry and Eriksen to thread the needle between Lampard and David Luiz. Soldado manages his end by slowing his run, causing Terry to overshoot by a yard, and Eriksen duly picks him out. Now Chelsea are in real trouble, because with one touch Soldado can hit the ball back to Sigurdsson -- and there's nobody with the momentum to block off that pass. 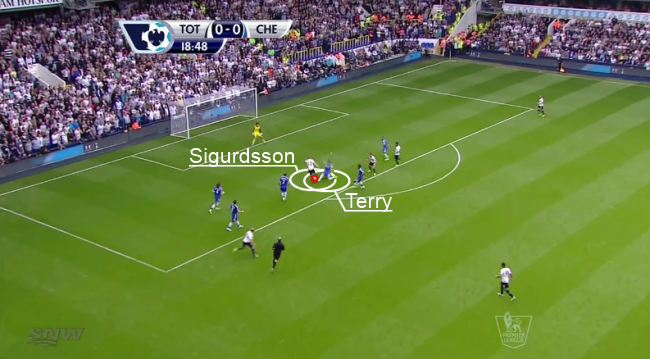 There's one last chance to stop this goal. Terry, who'd (understandably) lost Soldado, actually managed to get a boot on the striker's layoff to Sigurdsson, but an unlucky bounce meant that he retained possession anyway. A very tidy finish later, and Chelsea were 1-0 down.

Sometimes you can pin goals on the failure of individual players. Sometimes you can't. There are certainly things that you might have wanted done differently here -- specifically Mikel's attempted challenge on Dembele -- and the fact that Ivanovic decided to follow Sigurdsson without actually following Sigurdsson was obviously a mistake, but the fact of the matter is that this took very good play from all three of Eriksen, Sigurdsson and Soldado.

Spurs played this one perfectly, and Chelsea didn't quite match them. From such imbalances spring goals.