A complete and utter shambles: Breaking down the Everton goal

Share All sharing options for: A complete and utter shambles: Breaking down the Everton goal

To call the goal Chelsea conceded against Everton at Goodison Park a calamity would, perhaps, be underselling it. Scored by Steven Naismith on the verge of halftime, it took the wind out of the Blues' sails, precipitating the first loss of the season and taking the good vibes out of our campaign to date. It was also, from a defensive standpoint, a completely and utterly ridiculous goal to give up.

Let's start from the beginning. 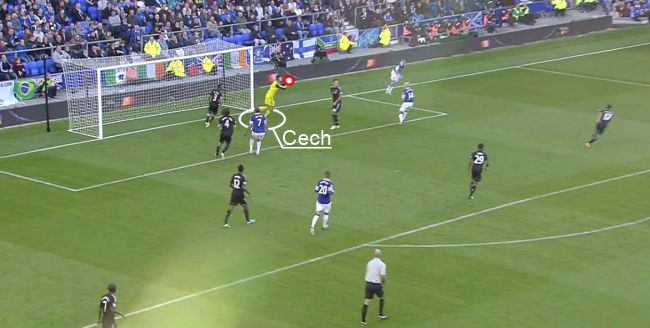 28 seconds before Naismith heads the ball past Petr Cech, there is zero threat. Everton were on the attack, sure, but the goalkeeper had claimed an attempted knock-back and possession was secure. With a minute of time left on the clock, there was virtually no danger of conceding from this position unless several really dumb things happened. 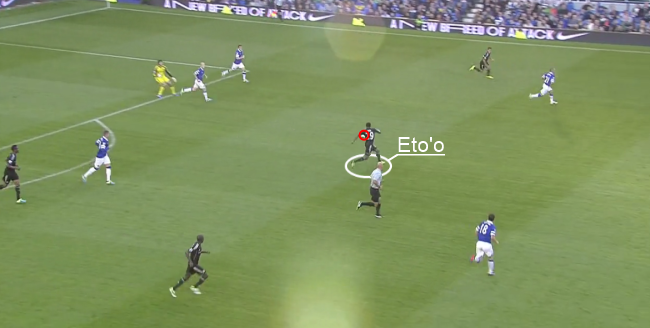 The first dumb thing that happened was Cech attempting to launch a counterattack with a rolled pass through the middle. But that wasn't a disaster, because Samuel Eto'o should have been able to latch onto the ball, however wayward it was. 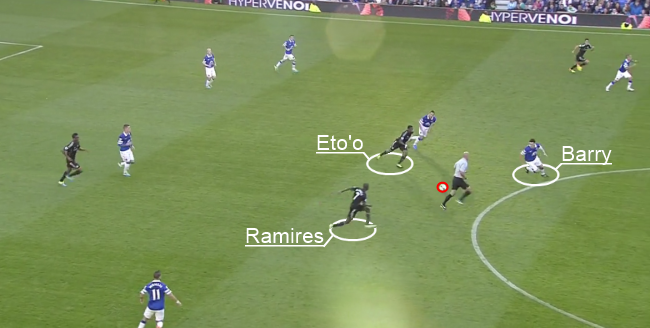 As it turns out, Eto'o misjudged where it was going and allowed it to roll (mistake #2). But no matter, because the ball breaks loose and both Eto'o and Ramires are in a position to counterattack. Although Gareth Barry is around, both Chelsea players should be able to beat him to the ball, and that would open up Everton completely. Ideally, Eto'o, better positioned to gain possession, plays a pass into the space ahead of Ramires. That'd have been nice.

From this position, Chelsea are about ten times as likely to score as Everton. What happened? 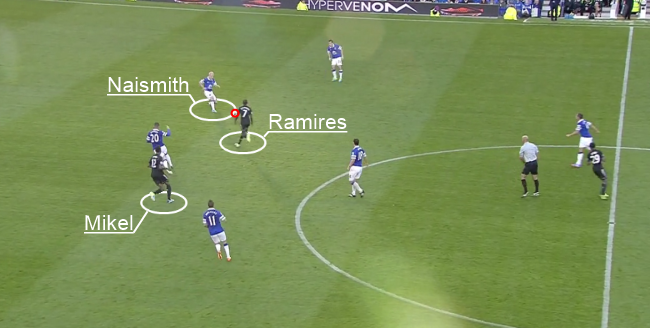 This happened. Eto'o let Ramires get the ball (#3), and Ramires, in seeking to avoid a challenge from Barry, ended up passing it backwards to Naismith (#4). Suddenly Everton had the ball in the vast space between the line of midfield and defence, and Chelsea's wingers were having to call off their bombing runs forward. Well, one of them did, at any rate -- we don't actually see Eden Hazard again until the second half. Fly free, yon Belgian! Fly!

This is a very dangerous position for the defensive side. Everton have men forward and are already behind the midfield screen, with plenty of space to work with. At this point the midfielders need to get back as soon as possible and the defence absolutely must stay tight. 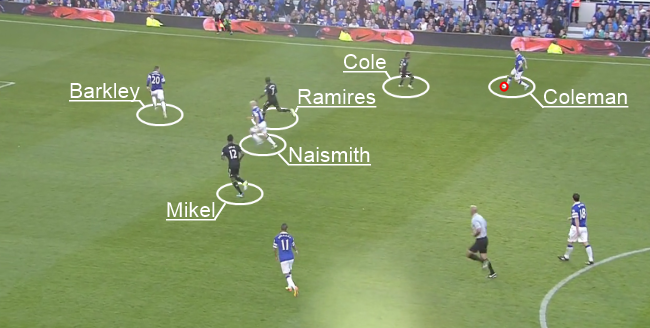 Ok, so Cole didn't stay so tight. Instead, he charged down Seamus Coleman on the left flank. That opened up space for Ross Barkley -- being tailed hilariously ineffectually by John Obi Mikel -- to run into. Mikel was never going to catch him, so Ramires sensibly decided to take Cole's place in the back line, handing Naismith over to... well, nobody.

The danger here is the possibility of the defence getting sucked towards the ball. The line had already been disrupted by the Cole for Ramires swap, and if Mikel also chases towards the corner there's going to be a big, big gap opened up in front of the centre backs. 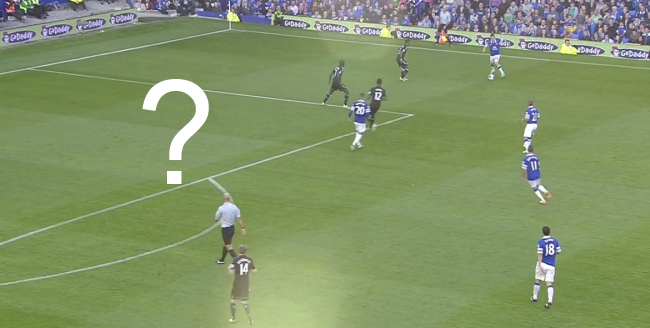 Yes, sort of like that. This is the type of situation that should make people break out into a cold sweat. A huge pocket of space, with opposition players free to make runs into it. Sirens were, by this point, shrieking. 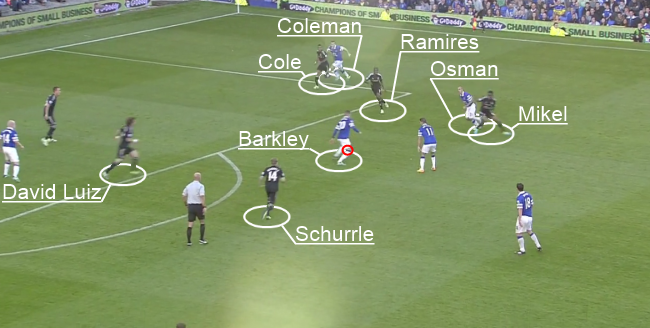 Andre Schurrle heeded the call, coming off his position as a right winger to help man the centre. Less sensibly, David Luiz decided that the danger is simply too much and broke the defensive line to close off the space. Both decisions cause problems later on, although the latter is obviously more egregious. It's clear what motivated David Luiz to come out -- thanks to Mikel missing a tackle on Leon Osman and Ramires chasing the ball like a headless chicken the positioning of the midfield screen was such that they were giving up a huge opening and his defensive partners were two-vs-two without him there -- but that doesn't actually justify charging out like that.

Especially because he was nowhere near able to help before things got even worse. 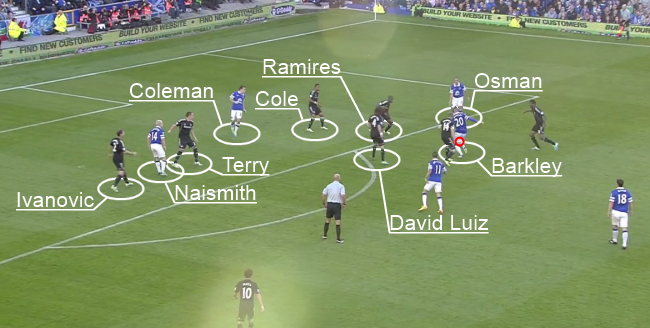 Note that Juan Mata is undergoing spontaneous human combustion in this photo. Presumably this was what led to his substitution in the second half.

In the earlier image, we saw Coleman starting a run into the box. Cole had him covered, but later he decided to hand his mark off to John Terry. This makes sense if one is marking zonally, but with David Luiz trapped in no-mans land it's crazy, because Terry has to pass off his man to Branislav Ivanovic, who in turn is busy pretending like there's nobody on that far post.

In this situation, what I'd have liked to have seen was Cole tracking Coleman's run and delegating left back responsibility to Ramires. Andre Schurrle playing his position rather than covering for the central midfielders would also have been helpful. That would have left the impact of David Luiz's error as an awkward but not awful 3/4-on-3 in the box. Instead, Cole ended up standing around, because Ramires pretended to be a (bad) left back anyway. 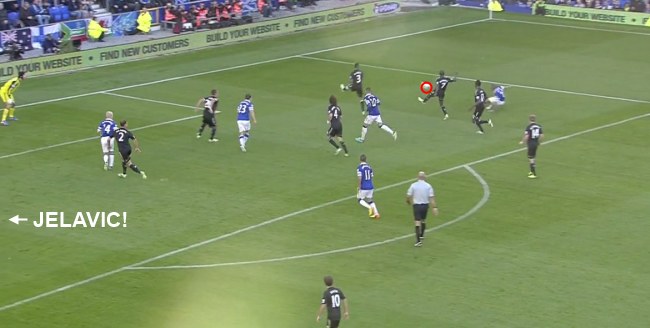 And that's how we managed to get all seven defensively-minded Chelsea players in a tight triangle on one side of the penalty box. As soon as Osman managed to get his cross away to Nikica Jelavic, all of the Blues' defensive errors came home to roost. I assume you know what happens next.

There were a host of minor mistakes in this one, and you could probably argue that we managed to get in the double digits so far as positional and technical errors go. But blame falls most fully on Ramires, closely followed by David Luiz. The threat differential between pictures three and four is enormous, and it happened because Ramires' first touch is, from time to time, absolutely appalling. David Luiz's rash charge then led to a complete breakdown in terms of marking Osman's cross, although his culpability is somewhat mitigated by the fact that the midfielders were in a complete pickle.

What a disaster this was!