We've been without a Chelsea game for two weeks now, but that will all change tomorrow. The Blues will head to Everton for the final Premier League game of the day, with a chance to make it ten points from the first four fixtures of the second Mourinho era. Here's what you need to know in advance of the game:

Forecast: It looks like it will be a relatively pleasant day in Liverpool, so any traveling fans should have nice weather to watch the game in.

Chelsea FC Squad News: There is nothing new to report on the injury front, both Tomas Kalas and Kenneth Omeruo are still unavailable with long term injures while everyone else will be available for selection. The includes new signings WIllian and Samuel Eto'o, with Jose Mourinho basically guaranteeing that the latter of the pair will feature tomorrow.

There are also rumors flying around the internet that Chelsea will unveil new signing David Luis on Saturday, the bizarro world equivalent of the lovable David Luiz that has made Barcelona think that the Brazilian might be available. The new jerseys have been spotted on ebay, and are selling like hotcakes. 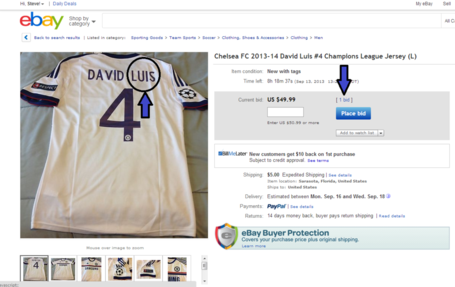 Everton Squad News: Everton have a few question marks ahead of this contest, but one player who is definitely not going to be taking part is loanee Romelu Lukaku. Lukaku is not allowed to play against his parent club due to FA regulations, so he'll have to wait a bit longer to make his Everton debut.

Both Darren Gibson and Antolin Alcaraz returned to training this week, but neither look likely to be fit enough to take part tomorrow. James McCarthy and Seamus Coleman both suffered minor injuries over the international break, but both seem like they have a decent chance of taking part.

Television/Streaming Info: In the UK, Sky Go, Sky Sports 1/HD, Sky Sports 1 Ireland, and Sky Sports 3D will all be carrying the game. In India both ESPN HD and Star Sports HD have you covered. US viewers have their choice of NBC or Mun2 for their coverage, while streaming will be available on NBC Sports Live Extra. There will also be live audio available to all Chelsea TV subscribers.

More from We Ain't Got No History: