It would be impossible for Chelsea fans to forget the last time they faced Bayern Munich - it was in, of course, the 2012 Champions League final, with Roberto Di Matteo's side overcoming the odds to upset the German giants on their home turf. 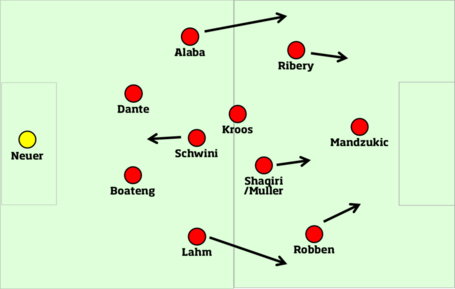 However, the loss shouldn't have, and didn't, mask the fact that Bayern didn't need to make wholesale changes to take the final step. That might seem a ludicrous suggestion when considering Bayern spent in upwards of fifty million in the aftermath of that defeat to Chelsea, but the key transfers - Mario Manduzkic from Wolfsburg and Javi Martinez from Athletic Bilbao - merely upgraded the squad, rather than significantly affecting the style of play.

Both offered greater physicality at striker and holding midfield respectively, their willingness to work hard and thus engineer Bayern's high pressing game allowing the other creative players to become more influential. Franck Ribery and Arjen Robben continued to cut in from the flanks, with Toni Kroos and Thomas Muller providing extra creativity from the centre - the key difference was that now, the supporting cast was significantly better, as Mandzukic and Martinez were certainly upgrades on Mario Gomez and Luis Gustavo.

Had Chelsea played Bayern in the 2013 Champions League final, they would have come up against a fairly similar side to the one defeated twelve months before then - a 4-2-3-1 formation, with the wide players drifting inside, the full-backs pushing high up the pitch and the whole side dominating possession and pressing intensely when they lost the ball.

However, Chelsea are instead facing them fifteen months after that final, during which time Pep Guardiola has replaced Jupp Hencykes. As discussed widely, Guardiola's far more obsessive about possession. Even though Bayern regularly ranked second in Europe for possession under Hencykes, that statistics often felt superfluous, and more reflective of their sheer dominance over weaker Bundesliga sides rather than any clear intent to keep the ball at all costs.

The latter, rather, is the clear wont of Guardiola, and although Bayern haven't played particularly well in the first four games of their league season, he's been at great pains to emphasize his delight at their high possession statistics.

The second, and perhaps more discernible change, has been the switch to a 4-3-3 formation, although the German media continues to call it a 4-1-4-1. Regardless of notation, the difference is obvious - he's flipped the midfield triangle, so that like Barcelona, one midfielder sits deeper, with two higher up the pitch, rather than the double pivot we've become accustomed to in recent years.

Regardless of notation, the difference is obvious - he's flipped the midfield triangle

The identity of that lone holding midfielder has perhaps been the most intriguing element of Guardiola's Bayern. The broad perception was that Javi Martinez would play that role, as the solider, more defensive midfielder in last year's 4-2-3-1, but instead, Guardiola seems keen to play him at the back, continuing the rising trend of midfielders being switched to centre-back.

Instead, it seemed like Guardiola's intent was to play new signing Thiago Alcantara as the lone pivot. His signing caused anguish amongst Bayern supporters, who felt it was a waste of resources in a position they were already well-stocked, but that betrayed the fact that Guardiola clearly had a plan for the Spaniard, suggesting he had "attributes we don't currently possess in our squad."

Those attributes seem to be the ability to receive possession and recycle it quickly. Guardiola wants quick football, and Thiago's excellent at receiving a pass and, in one touch, turning and facing the play. This might sound nitpicky, but watch the way Martinez receives a ball and compare it to Thiago. The latter swivels his body in one quick motion - the former might take two, or three, to turn. Thiago helps make Bayern's attacks flow quicker.

It's why even when both Thiago and Martinez are injured, Guardiola turns to Bayern's lynchpin, Bastian Schweinsteiger. The midfielder would be assured of his starting place anyway, but it's questionable whether that would be in the single pivot role he's played for the majority of Bayern's season so far, or rather, higher up the pitch.

Regardless, he's still a good fit, and having shaken off an ankle injury will start here at the base of Bayern's midfield, looking to drop deep and split the centre-backs (and thus allow the full-backs high up the pitch). A quick, clever passer who, once the game is at an even tempo, can set the pace with incisive forward balls - however, he can be vulnerable when pressed, and Chelsea might benefit from closing him down quickly at the start of the game, to force him into rushed, hurried balls. 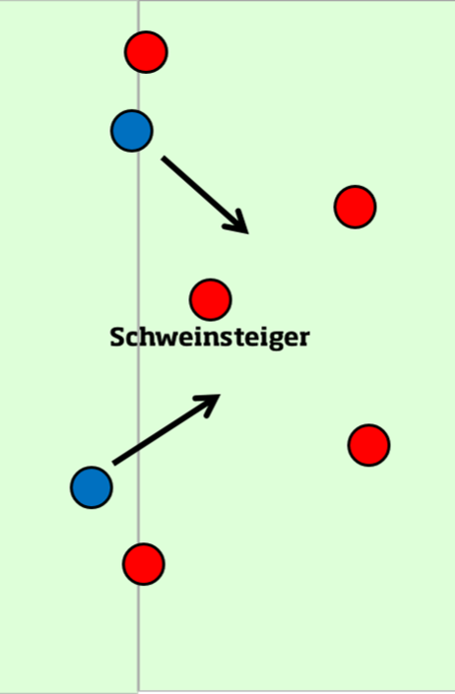 He's also clearly not the strongest defensively, and there have been numerous occasions in which Bayern's opponents have broken past him at speed, most notably in the opening game of the season against Borussia Monchengladbach. The problem is exaggerated when the full-backs move high up the pitch, and the two other central midfielders move into goalscoring positions, leaving Bayern with a back three containing one player who can hardly be considered defensively solid.

With Jose Mourinho likely to employ a conservative, counter-attacking approach with two disciplined banks of four, he will encourage the wide players, when breaking forward, to move inside into positions where they can overwhelm Schweinsteiger.

So if I was managing Chelsea, I'd ask Oscar and the striker to take turns pressing Schweinsteiger, but leaving him free when he drops in between the two centre-backs. Then I'd play Hazard and Schurrle on the flanks, and encourage Hazard in particular to dart inside (on the break) towards Schweinsteiger.

Meanwhile, we can expect a lot of the usual behaviors from Bayern's attackers. As Bavarian Football Works note, David Alaba, Jerome Boateng, Phillip Lahm, Franck Ribery, Mario Mandzukic and Arjen Robben were all rested for the Freiburg game on Tuesday, meaning we can expect Bayern's front three to comprise of the latter trio. Mandzukic will press selflessly high up the pitch and also be a useful target for long balls - his ability to hold up play and challenge in the air shouldn't be underestimated.

Robben and Ribery, meanwhile, will constantly look to move inside, with Robben in particular starting wide on the right but dribbling inside quickly. However, they don't suffer for width for two reasons - firstly, Lahm and Alaba motor forward at every opportunity, with the captain especially good at low cut-backs across goal, which Rene Meulensteen rightfully pinpointed as a weakness of Chelsea's back four.

Secondly, Ribery and Robben quite often receive passes close to the touchline, as it is in those positions they have the most freedom and space to collect the ball and assess their options before moving inside. Recently crowned European Player of the Year Ribery is more creative and a sublime dribbler, and hits delightful balls over the top for Mandzukic to chase. Robben, meanwhile, is more direct, and far more likely to take on shots. 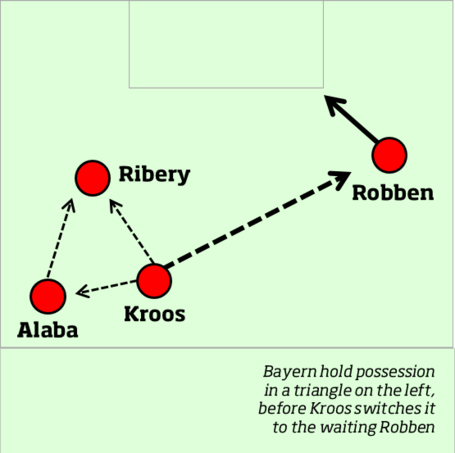 Interestingly, Guardiola has devised a pattern of play which plays to this trait. Firstly, Alaba pushes high up the pitch to combine with Ribery, and importantly, so does Toni Kroos from a left-of-centre midfield position, creating a neat triangle and meaning that Bayern can overload opponents down the left flank - Mandzukic tends to drift left as well, which exaggerates the trend.

However, Kroos will then switch the point of attack to the right-hand side, so that Robben can receive passes against a stretched defence and have the space and ability to cut inside towards goal, as shown in the diagram.

We might see Guardiola experimentation in this match, considering it is purely a friendly, so the use of Mario Gotze or Xheridan Shaqiri up front wouldn't be surprising, so these are just some interesting tactical points that we can expect from a re-jigged Bayern Munich.