It was all Rooney all the time and then BAM, WILLIAN! Bet you weren't expecting the Russian Inquisition.

I didn't think we were going to need another Transfer Rumor League update again this year until the very end of the transfer window, but then ... well ... you know, we put the silly back into silly season, for realsies. 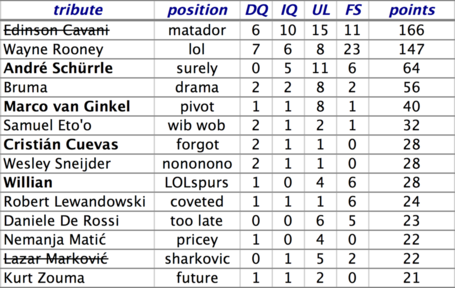 With a week left, Wayne Rooney actually has a good chance of breaking Cavani's points record set earlier this summer.  It would only be fitting for 'Wazza' to not end up at Chelsea as well then.

Somebody who did end up with us after all is Willian, but his transfer was so sudden and so clandestine that we barely had a chance to cover it beyond a few rumors and tweets and a snarky comment from Mourinho about medicals.  Nice to have José back at the top of his media game though, bringing out similar snark in ex-protégé AVB and all the while continuing to clearly annoy* the red half of Manchester.

* It will be extra sweet with three points won on Monday.  Not so much otherwise of course...

Samuel Eto'o is the only other new name near the business end of the table and I'm guessing we may not have heard the last of him either.

Welcome back to the fun transfer window.  Are you ready for the last week?  Can you handle it?