Although both sides brought in new managers over the summer, very little has changed at either club. Jose Mourinho has kept with the 4-2-3-1 that best suits the ludicrous attacking midfield talent at his disposal, recently bolstered by the impending signing of Anzhi's Willian. Mourinho has been happy to encourage his playmakers to interchange fluidly and drift inside into central positions, supplemented by forward runs from his two pivot midfielders - so although Chelsea have shown glimpses of thrilling attacking play, they seem to have a problem with width, exacerbated by a seeming reluctance to allow the full-backs to get forward. 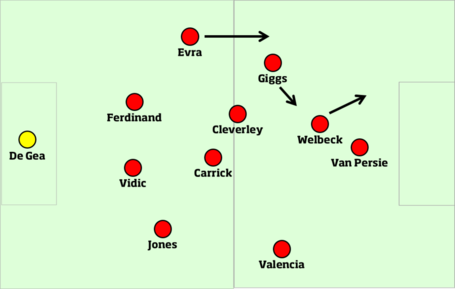 This was something Mourinho rectified with the introduction of Andre Schurrle on Thursday against Aston Villa, so it's not out of the question that the German could be in line for a first start here - his directness and defensive discipline could be crucial in what should be a tight, cagey encounter.

The other option in that right-wing position, with Juan Mata clearly not fully fit, is Kevin De Bruyne - he's more likely to vacate his flank and move into central positions. United have previously succeeded in suffocating the centre of the pitch, forcing Chelsea's playmakers away from goal - which is why Juan Mata's decisive contribution in the FA Cup quarterfinal last season came from a ball over the top from a very deep position, and even that relied on a bit of a physics-defying finishing from Demba Ba. With David Moyes keeping with broadly the same approach that defined Sir Alex Ferguson's extraordinary tenure at the club, Mourinho might be wary of playing into his hands with a playmaker-heavy approach.

The second factor behind a potential Schurrle selection might be the threat of Patrice Evra, who motors high up the pitch and seems to be reciprocating the ‘Leighton Baines' role for Moyes with a stream of crosses from deep positions. There isn't a question about De Bruyne's work ethic, but his movement inside would make it more difficult for him to recover his defensive position when Chelsea turn the ball over - with Schurrle more likely to stay wide, and also boasting greater pace, he might be a better option to monitor Evra.

On the opposite side, with Rafael out injured, there is less concern about picking a player defensively diligent enough to track the forward runs of Phil Jones. Eden Hazard is perfect - he won't completely forgo his defensive responsibility in protecting Ashley Cole, but will also relish the opportunity to dribble directly at the sometimes cumbersome, positionally insecure Phil Jones.

Mourinho's other dilemma is up-front: having started with Fernando Torres on the opening day, then switched to Demba Ba for Aston Villa, it would appear, logically, that it is Romelu Lukaku's turn to play as the lone centre forward.

However, it depends on whether Mourinho wants a false nine to try and drag away United's central defenders, or a more classic centre-forward presence to challenge them with both physicality and pace. Both Rio Ferdinand and Nemanja Vidic are assured defenders and shouldn't be naïve enough to be drawn upfield by Torres' movement towards the play, so Lukaku appears the more sensible choice - and it's worth remembering he scored a hat trick against United on the final day of last season.

The identity of United's striker, meanwhile, is obvious. Robin van Persie's biggest threats (obviously, beyond his goals) is his movement; by pulling deep, drifting wide and linking up play intelligently, he helps facilitate United attacks and becomes so unpredictable for his markers that they lose track of him at the vital moment - when he pops up into goalscoring positions.

Mourinho, meanwhile, isn't happy with his central striking options, and considers Wayne Rooney to be his main transfer target, and will present a third bid to United after the match. Moyes has suggested Rooney could start, but with ongoing speculation about his future, this seems like something he'd want to avoid - especially with Danny Welbeck and Robin Van Persie combining well upfront anyway. Rooney has performed a useful role in the past in occupying Chelsea's deepest midfielders, but so has Welbeck - and the latter has also combined well with Ryan Giggs, who flits between a left-wing and central playmaker role (and thus, with his narrowness, encourages Evra to move forward). As Tom Williams put it:

Giggs played slightly in advance of Carrick and Cleverley, and was often the player charged with carrying the ball forward into opposition territory, but he occasionally drifted wide to take up a role on the left. Welbeck orbited in support of Van Persie, typically moving to the left when Giggs was not there, but in the game against Swansea he also made a series of bursts into the penalty area from central positions, as his two goals demonstrated.

Although changes in the midfield zone can't be ruled out - Ferguson had a history of switching to 4-5-1 and frequently packed the centre against Chelsea, using Anderson, Jones and Cleverley in tandem in the last clash between the two sides, while Moyes often did the same whilst at Everton - the combination of Tom Cleverley and Michael Carrick appears likely.

It's difficult to define exactly what the point of Cleverley is, or indeed what his strengths are, but Carrick is a little more obvious - when given time on the ball, he can set the tempo of United's attacking play fantastically and is particularly superb at clever, forward passes into the feet of the attackers.

It's important Chelsea work hard to close him down, not allowing him time on the ball even if Mourinho takes a cautious approach and asks his side to sit deep. As the stunning assist for Javier Hernandez in the 2-2 draw in the FA Cup at Old Trafford showed, Carrick is capable of excellent lobbed through-balls, but Oscar is perfect for the job - an intelligent, disciplined player who looks set to become a key player under Mourinho.