Countering the counter: How Chelsea worked the opener against Aston Villa

Share All sharing options for: Countering the counter: How Chelsea worked the opener against Aston Villa

The counterattack is supposed to be Aston Villa's primary threat. They certainly have the personnel for it -- in Christian Benteke, Andreas Weimann and Gabby Agbonlahor they have a trio of fast forwards and a lovely blend of power and ingenuity that makes them a real danger to over-commit against.

But it was Chelsea, not Villa, who scored the only true counter-attacking goal of Wednesday's clash at Stamford Bridge. Let's take a few minutes to forget about the messiness that was most of the game and focus on the opening goal.

There are three phases of play that directly lead to Antonio Luna's own goal. I'm not going to screencap the first, since it's only really interesting in the broader context of a full match analysis (we'll get to that later), so I'll just give a bare-bones explanation.

Chelsea had the ball deep in their midfield before Ramires launched it toward the corner flag on the left for Eden Hazard to chase. Villa were playing a very narrow back line, so his competition for the (not particularly accurate) pass was actually Weimann rather than right back Matthew Lowton. Thanks to some incredible control, the Belgian turned out to be the winner, but Weimann did well to deflect Hazard's attempted cross, and the ball ended up back in the visitors' control. 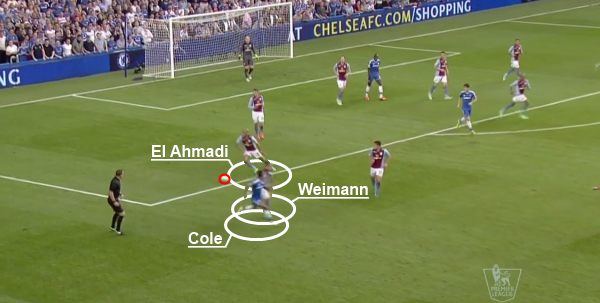 At this point, Villa would have been looking to execute the counterattack. Weimann, who, seconds previously, was defending a cross near his own corner flag, was beginning a blitz up the pitch in a bid to break past Chelsea left back Ashley Cole and into the vast, profitable area beyond. Cole is tracking, but Karim El Ahmadi could have beaten the defence with a perfect ball. He doesn't quite manage it. 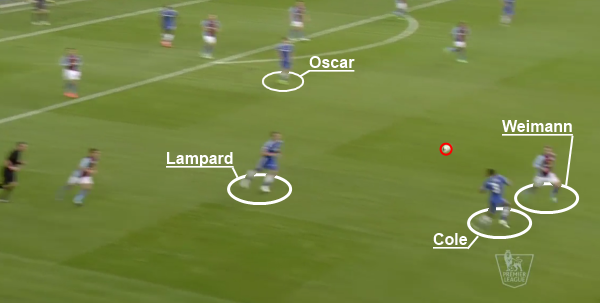 It's impressive how much ground both Cole and Weimann covered in the time it took El Ahmadi to release the pass, and Cole's hard work paid off handsomely. He was able to break up Villa's counterattack as it was just starting to develop, and, better yet, he was able to direct his header towards Frank Lampard just as Villa were starting to move upfield.

Chelsea's forwards were, at this point, more or less unmarked. The counter-counter attack was on. 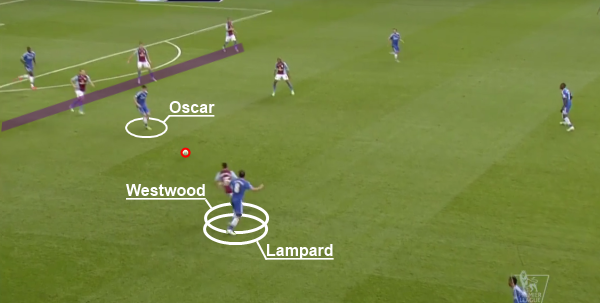 Lampard quickly fed possession to Oscar, with Ashley Westwood powerless to intervene. That left the Brazilian in space in front of the defence (purple line) -- none of Villa's midfielders are in a position to close him down. Note that, in the above screen capture, Lowton is very tight in, just out of view of the camera.

What happened next should have been obvious to anyone who read Tim's Aston Villa scouting report.

[I]t will be intriguing to see if Ron Vlaar is dragged up-field. He already tends to try and stick tight to his man when marking, so a deliberate strategy from Demba Ba or Romelu Lukaku to try and move him out of position and thus create space in behind for the likes of Andre Schurrle and Eden Hazard might be successful. 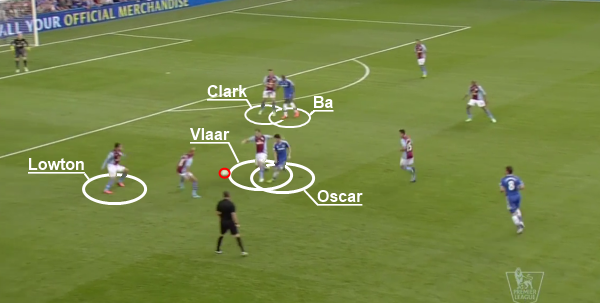 That pass, of course, was to Eden Hazard, who'd been lurking off-screen on the left this whole time. With Villa charging forward on their short-lived counterattack and their back line naturally very narrow besides, Hazard had found himself totally unmarked and onside*-- Weimann was far too high up the pitch to be tracking him as he was earlier.

While Jose Mourinho has asked the winger to be a little more diligent defensively, staying up high for the first few seconds of an opposition attack was a perfectly reasonable decision, and it allowed Chelsea to make the most of Cole's intervention by ensuring their most dangerous player was free to make a run on goal when they got the ball back. 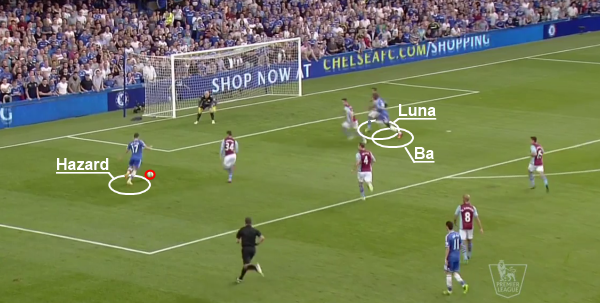 Hazard had two options -- the cross or the shot. With Ba making a run, the defence has to follow him in, and when Hazard chooses to shoot for the far corner, that meant that Brad Guzan was forced to parry back into a crowd of bodies. The result was a slightly unfortunate Luna own goal, but the rebound would very probably have been put in by a Chelsea player had Luna not netted on the Blues behalf.

None of this would have happened without Weimann and El Ahmadi attempting to play what would have been a dangerous counterattack had Cole not made the interception. This was Villa getting a taste of their own medicine, and it was very well done.