Some papers are reporting that Todd Kane wants a move, but is there actually anything to worry about?

Share All sharing options for: Some papers are reporting that Todd Kane wants a move, but is there actually anything to worry about?

Todd Kane has yet to make his debut fr the England U21 side, but the young Chelsea right back has been training with the U21 side ahead of tonight's clash with Scotland. He's impressed enough with his loan spells at Blackburn Rovers that Roy Hodgson will certainly have to consider him this evening, which is also enough that Blackburn fans would love to see him make the switch to their club a permanent one.

Because of that, the local papers are sure to try to interpret his comments to mean things that he's not actually saying. They did so yesterday, and ran the following sensational headline: 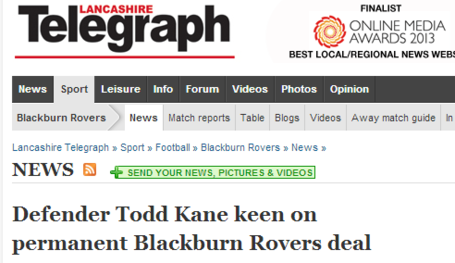 Here's what Kane actually said when specifically asked about a future move:

"I certainly wouldn’t rule out joining Blackburn, it is a fantastic club."

"There were talks last year, but Chelsea wanted me to stay at Stamford Bridge and I signed a new contract that keeps me there until 2016."

"I really like Blackburn, I’m pleased to come back and I’m very grateful they wanted me back."

"I’d consider it if Blackburn came in for me, but right now I’m a Chelsea player and my main priority is to try and establish myself at Stamford Bridge before I think about anything else."

I'm sure that's going to have a whole bunch of people up in arms, but frankly, it doesn't sound like a whole lot to get worried about to me. He was asked specifically about Blackburn and said some complimentary things about the club, while at the same time reminding the press that this is just a loan for now. He also made sure not to close the door on a future move, as nobody knows where Kane will stand in the pecking order 12 months from now.

If Kane has an impressive loan spell at Blackburn, this doesn't look like it will be an issue. Chelsea obviously rated Kane highly enough to assure they have him under contract for three more seasons, and if he impresses this year, he'll almost certainly be extended. Unless Blackburn get promoted, he'll probably be too good to tie himself to that club in a year anyway.