José Mourinho rotated his squad, seemingly at random. But can we learn anything from the madness of ever-changing lineups?

Share All sharing options for: A look at preseason minutes, goals, lineup choices, and a bonus Torres talking point

The final count on the preseason that was actually fun for a while but then dragged on for just a bit too long is as follows: seven matches, six wins, one loss, twenty goals scored, six goals conceded.  Thirty-two players used for just 630 minutes of match action.  To say there was heavy rotation would be a massive understatement.  But it's preseason and that's what happens during preseason.  Still, can we spot any patterns in the lineup madness?  Let's try.

TheChels.net already had a rundown of minutes played for this preseason by the players (Cahill, Ramires, Hazard, Terry, Ivanovic, Van Ginkel is your top six), so I'm not going to repeat all of that.  But with two different tours and a few crucial injuries, another way to look at these numbers would be minutes played out of the total available to each individual player.  For example, David Luiz only had 75 minutes of pitch-time, which sounds less tragic when framed against the background of being available for just two matches - his percentage of minutes played then is 42%. 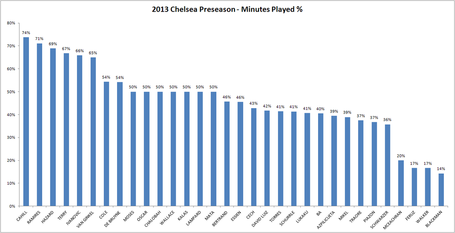 David Luiz missed the Asia portion of the preseason, so his minutes played percentage is also 42% when we look at just the four matches in the USA.  For others, that's not the case. 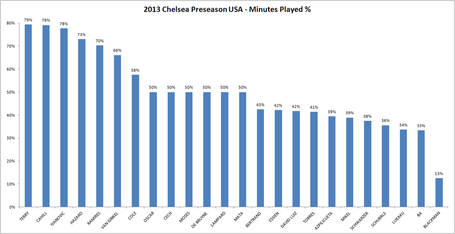 None of the Confederations Cup Six played more than 50% of minutes available to them, while I was surprised to find new boy André Schürrle near the bottom along with both Romelu Lukaku and Demba Ba.  Perhaps I shouldn't have been, considering that Schürrle had been below par due to his fever and both Lukaku and Ba had to pretty much share a single lineup slot with Fernando Torres so the 33% makes sense.

Another way to look at the minutes data would be to see what sort of partnerships were employed.  The fact that we now have a manager unafraid to actually change formation makes this a little less clear cut, but let's take a look anyway.  As an executive decision, the data from the three matches in Asia will be disregarded from here on out as the USA numbers should be far more representative of what we might see when the season actually begins.

Having said that, the only exception might be in central defense, where Tomas Kalas was used extensively with both Cahill and Terry.  It'll be interesting to see how he slots back in once he's recovered and suddenly having to also compete with David Luiz.  In absence of the Brazilian, the Terry - Cahill combination was used pretty much by default.

Back when we married to the 4-2-3-1, we could easily look at the pivot and see what's working and what isn't.  Now we'll just have to take our four central midfielders two at a time.  Which doesn't really tell us much, except that for whatever reason, Marco van Ginkel and John Obi Mikel were never on the pitch at the same time.  In theory, that partnership sounds like it could work quite well, so its complete absence was a bit surprising. 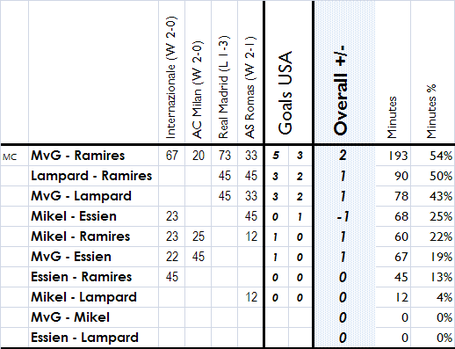 Breaking down the attacking band in a similar manner, we can see that Juan Mata - limited by injury, in fairness - was never deployed alongside either Oscar or Kevin De Bruyne.  I'd consider those three our three best classic playmakers (i.e. #10) and it seems like Mourinho might be thinking along the same lines.  With zero minutes for 'MaZaCar,' it appears that we may be sticking with more direct players like Victor Moses, André Schürrle, and of course Eden Hazard in the wide positions. 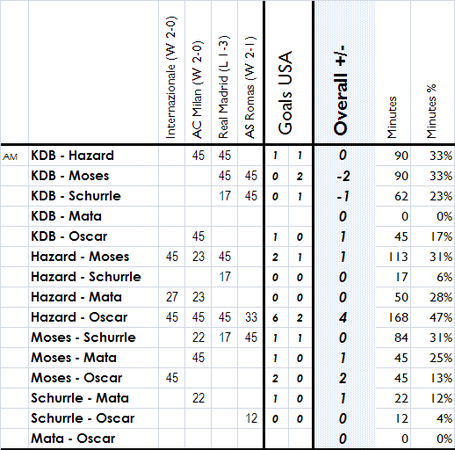 As far as our three options at center forward, so far Mourinho has taken a shine to having Lukaku supported by Oscar and Torres supported by De Bruyne.  I realize this is a very limited data-set, and Mata's injury was ill-timed, but it may still be worth noting that Lukaku received the least amount of minutes with our best playmaker. 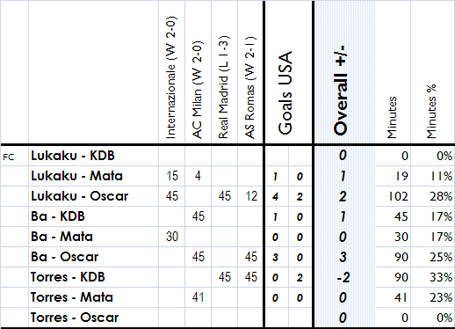 Lastly, here's the full set of individual minutes (and plus-minus) data from the USA Tour. 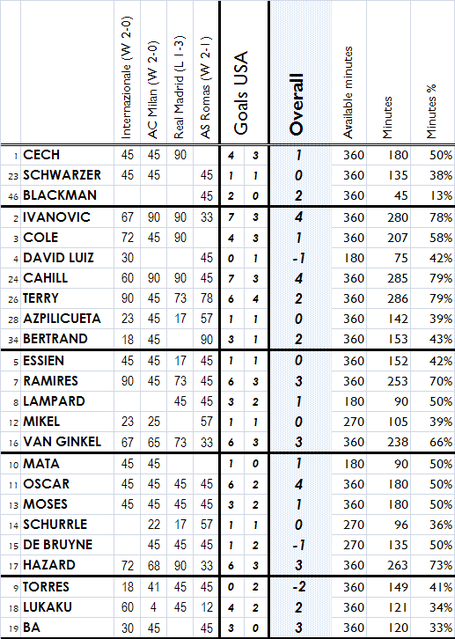 Anything jump out at you?  (Hopefully no mistakes...)  Two things for me though: