Do Chelsea FC actually need to sign a backup goalkeeper this summer?

It might be hilarious if we started the season without signing a new backup. Get it? Hilarious...

Share All sharing options for: Do Chelsea FC actually need to sign a backup goalkeeper this summer?

I saw some rumors floating around on twitter today that Chelsea's Demba Ba had switched squad numbers for the upcoming season. I decided to take a quick peek at the Chelsea FC website just to see if they could confirm, and was absolutely shocked at what I found. Curious? Here's what caught my eye: 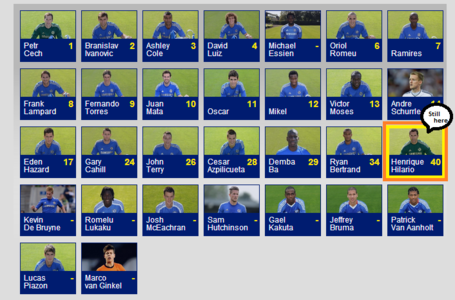 Ross Turnbull, Florent Malouda, Paulo Ferreira, and Yossi Benayoun have all been removed from the Chelsea website while new signings like Andre Schurrle and Marco van Ginkel have been added. It strikes me as odd that Henrique Hilario is still listed as a Chelsea player though, as I was under the assumption that he was out of contract.

This got me thinking about whether or not I missed something, so I dug through the archives at the Chelsea website to double check. The last bit of business involving Hilario that I see is his contract extension from a year ago, and that seems to confirm what we already believed*.

*That Hilario's contract has indeed expired

So have Chelsea failed to announce the extension of one of their backup keepers, or have they simply overlooked Hilario to the extent that they forgot he was even on the club's website? Unfortunately I just have no idea at all, but I'd have to guess that he's simply being kept around in limbo.

There isn't going to be a hot market for Hilario, as he's barely reminded the world that he exists over the past several years. I'd imagine he's our fallback plan should we fail to acquire another keeper, and I'd have to think he'd be more than willing to continue collecting paychecks to sit and watch Chelsea games from the bench. It's a pretty nice gig after all, especially if you don't really care about playing time.

I suppose we'll just have to wait and see exactly what the summer brings us as far as backup keepers are concerned, but it's at least a bit more reassuring to know that the Blues might have more to choose from than just Sam Walker and Jamal Blackman. Blackman and Hilario would be just fine behind Cech as far as I'm concerned, especially as we'll likely see Thibaut Courtois join the London club full time following the World Cup this summer.