Do the math, yo: ten weeks down, five to go; two-thirds of the way through this no fun transfer window. 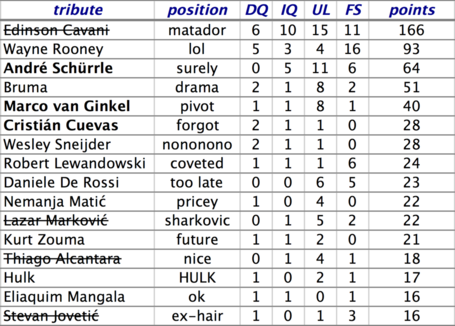 I found you, Way-nee Rooney; get it together and bring it back to me. Hit the players club, for about a month or two; put yo' hand on it and then see what you do.

Besides Rooney - and the cavalcade of rule-breaking public quotes from Chelsea - there's almost literally nothing else happening. The Portuguese Bruma* is in limbo as the Arbitration Commission seeks to incept some memories of contract terms into his head. Daniele De Rossi looks to be staying put. Doria (Astonishing Tales of the Sea!) and Junior Malanda and Alen Halilović are anywhere from tenuous to inconsequential. Luiz Gustavo and Sami Khedira are probably nothing more than pipe dreams.

Well, at least the preseason matches themselves are fun, for a change.

* on a sidenote, have two players sharing a common name ever looked less alike than Bruma and (Jeffrey) Bruma?