Three major statistical categories were tracked over the course of the season: minutes, scoring, and plus/minus. Here then are the final counts for the plus/minus data, following on from yesterday's Part I. I'm not going to pretend they're earth-shatteringly relevant, at best they're supporting evidence. It's all just a bit of fun, with perhaps a side of food-for-thought.

For now, let's look at some raw totals.

For the record, here's the chart of all the final individual plus/minus numbers. Marko Marin has the rather dubious distinction of being the only player in the minus for the season (-2). Oh, Marko. 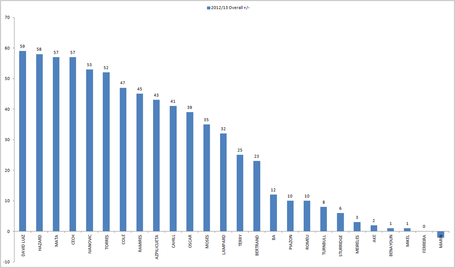 Breaking the totals down to per-90, we can see who falls above and below the Chelsea average of +0.94 (horizontal line). 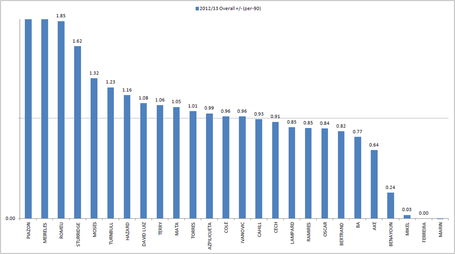 Lucas Piazon and Raul Meireles are major outliers thanks to tiny data samples, so they've been cut off. For what's it worth, Demba Ba doesn't exactly shine in this metric, while Victor Moses, Eden Hazard, and David Luiz excel the most of all the regulars. Our three most commonly used central midfielders (Ramires, Lampard, Mikel) all fall below the average as well, which coincides rather well with what was consistently the greatest weakness in the lineup.

As before, I think the more useful way of looking at the plus/minus data is through player-partnerships. Specifically, I've been tracking the center back pairs, the double pivot, and the attacking band of three for the season.

With the recent debate over Branislav Ivanovic, there may be some value in doing a "deeper dive" into the defensive numbers. So stay tuned for that, maybe. Until then, it's once again the pairing of Ivanovic and David Luiz who acquit themselves the best out of all combinations, while Gary Cahill is the common thread in the three combinations with the worst goals against average.

The continued enigma of John Obi Mikel's poor season - at least in terms of plus/minus figures - I fear may not ever be truly explained. Whether it was tactical, personal, or just unlucky and bad matchups, I don't know. Perhaps it doesn't matter that much, since the midfield had all sorts of issues anyway, which have now been ironed out thanks to impactful new signings this summer. Wait...

By far and away, the most used combination was the OG Triumvirate of Mata, Hazard, and Oscar, even though the Mata - Hazard - Moses configuration had better statistics. Of course, none of this takes opposition strength into effect (or any other similar factors for that matter).

Juan Mata & Eden Hazard were pretty much constant, while the rest were rotated alongside them. With Oscar, their goals for and against averages very nearly match the Chelsea average (as one would expect). Bertrand and Moses tended to add some extra steel into the attacking band, while Ramires was simply not working out very well.

And so we close the book on 2012/13. May it be the herald of even greater and better things to come.