We're far closer to the start of the new season than to the end of the old, which makes this post long overdue. Better late than never though, right? So here we go.

Three major statistical categories were tracked over the course of the season: minutes, scoring, and plus/minus. Here follow the final counts for the minutes and scoring data with plus/minus to follow tomorrow. I'm not going to pretend they're earth-shatteringly relevant, at best they're supporting evidence. It's all just a bit of fun, with perhaps a side of food-for-thought.

With a record number of games played, there were plenty of minutes to go around. Or would've been, if we had a manager capable of proper rotation ... hey, remember those fun times? I'm sorry; let's just look at the numbers. 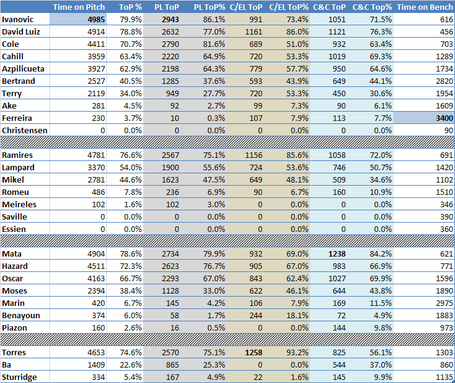 Going almost wire-to-wire, Branislav Ivanovic is your winner for most minutes played by any outfield player. David Luiz and Juan Mata are both just over an hour behind, while Ramires and Fernando Torres round out the top five. Petr Cech wins among all players of course (5655 minutes). With Frank Lampard barely clearing 50%, a lineup of the 11 most used players last season would read something like this: Cech; A.Cole, Cahill, Ivanovic, Azpilicueta; David Luiz, Ramires; Hazard, Mata, Oscar; Torres. Enhh ... that's ... ok ... I guess. 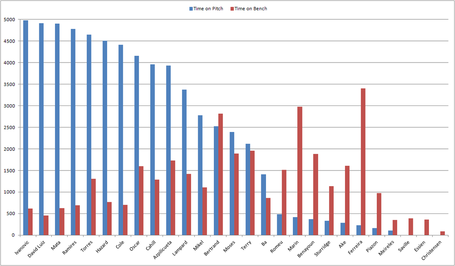 Here's where we can see the extreme difference between the minutes played by the dozen or so most used players versus the rest of the squad who amounted to barely anything more than innocent bystanders. Given the rigors of top level football, you'd expect the curve created by the blue columns to be somewhat more gradual. 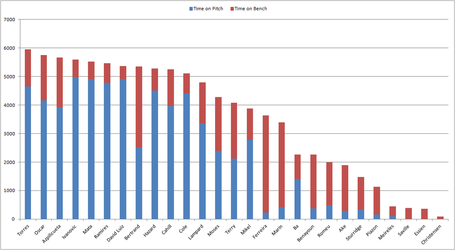 When we look at active minutes - time on pitch + time on bench - we do get a much more reasonable progression. Gary Cahill had led the active minutes chart for most of the season until injury forced him out of the squad. In his stead, it's ol' Fernando Torres - of Chelsea Torres FC fame - who pips Oscar to the top spot. Oscar of course has been playing football continuously since the dawn of time, so this is a fantastic accomplishment for Fernando.

You might notice that all players were tracked in a rather idealized and strict 90 minutes/match artificial restraint (i.e. I did not take into added-on time). For next season, I hope to include those small bits and pieces of minutes as well.

If you've been around for a bit, you will have seen these before. Yes, they are generous; yes, there are secondary assists. Yes, Fernando Torres did really score 22. Over half of them were game-changing even! Cavani who? 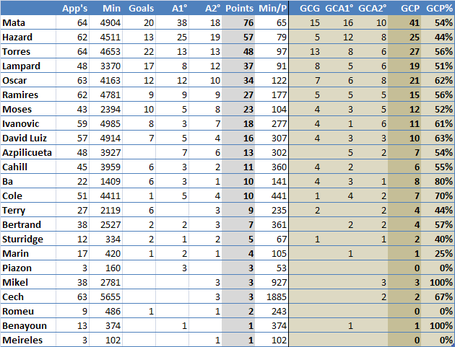 The lesson here, in yet another theme that has continued throughout the season is that Juan Mata is simply amazing. Twenty goals (75% of which were game-changing), almost twice as many primary assists, and another 18 passes before the pass. Chelsea scored 147 goals last year, Mata's feet were directly involved in 76 of them. For every 65 minutes that Mata was on the pitch, Chelsea scored a goal. Eden Hazard is the only other regular under 90 minutes in that aspect - although Lampard's 91 minutes/point is fairly impressive.

Cesar Azpilicueta wins the award of most points without scoring a goal (13, seven of which were primary assists), while Petr Cech deserves a special shout-out for his three secondary assists, including the one on Torres's goal in the Europa League final.

Most of the Chelsea heavyweights are bringing about 50-60% game-changing points to the table. Demba Ba and his nose for the important, as we've shown before, is a bit of an outlier at 80%. While his goal-return is just a paltry six from 22 appearances (less than half of what he produced in the same amount of matches for Newcastle), it is undeniable that he has scored some important - and memorable! - ones in his short Chelsea career.